How A New Crosswalk Radically Transformed Hollywood And Highland 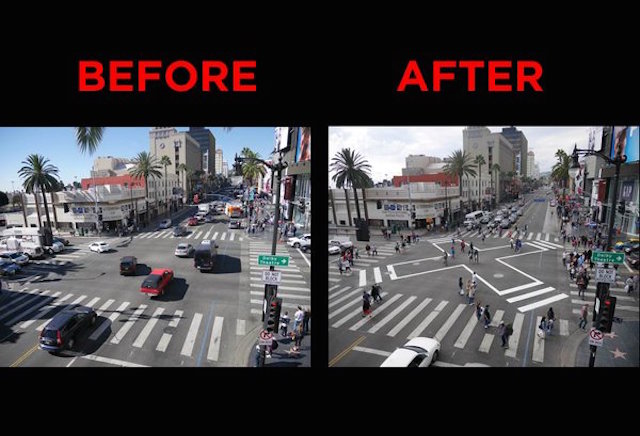 (Photo courtesy of the Office of the Mayor)

There is nowhere else quite like the intersection of Hollywood Boulevard and Highland Avenue. It's one of the most visited tourist destinations in the city—home to the Oscars, a massive shopping center inspired by the Babylon scene from the D.W. Griffith film Intolerance, a Red Line station, costumed street performers and endless movie premieres. It's also a notorious mess, particularly for pedestrians. Until very recently, it held the dubious honor of being the most dangerous intersection in L.A. for those on foot.

Enter the "scramble," a crosswalk design that radically transformed the intersection. The scramble, which was introduced last November, completely separates the time when cars and people are on the street. It pauses traffic in all directions while people cross diagonally to and from both sides of the street all at once.

In the first 11 months of 2015, there were 13 crashes at the pre-scramble Hollywood and Highland intersection, according to Gizmodo. Compare that to the last six months, where has been only one 'no-injury' crash at the now scrambled intersection. Pretty great, right?

What exactly made the iconic intersection so dangerous in the first place? Gizmodo columnist and city treasure Alissa "A Walker in L.A." Walker, argues that the answer is two-fold. First, there's the sheer number of people at that intersection, a teeming mass that often overflows off the sidewalks and into the street. Then, there's also the not-paying-attention factor: Hollywood and Highland is a lot for the eye to take in, with blinking lights and glitzy flash in every direction, meaning both pedestrians and drivers tend to be distracted.

Here's an on-the-ground view of the crossing, courtesy of L.A. Great Streets:

LADOT's Vision Zero initiative has been working to increase street safety and reduce the number of traffic fatalities to zero by 2025. So why not just put scramble crosswalks at all dangerous intersections? One obstacle, according to Walker, is price—the Hollywood and Highland makeover cost somewhere between $50,000 and $100,000, depending on whom you ask. They're not a one size fits all solution, but these crosswalks are a great tool, particularly for our most dangerous, high-volume intersections. According to Streetsblog LA, the city has already implemented several near the USC and UCLA campuses, and LADOT says more are on the way.

In the meantime, we'll savor the newly safe crossing at what LADOT General Manager Seleta Reynolds has called "the red carpet entrance" of intersections. Nothing improves the Hollywood tourist experience like not being in imminent danger of getting a hit by car.

We pedestrians would like to thank Mayor Eric Garcetti, Councilman Mitch O’Farrell, LADOT, the Vision Zero team, and, of course, the Academy. Heck, we're feeling so grateful we might even throw in Chad Lowe.