Donald Trump Says There Is No Drought In California, Will "Open Up The Water" 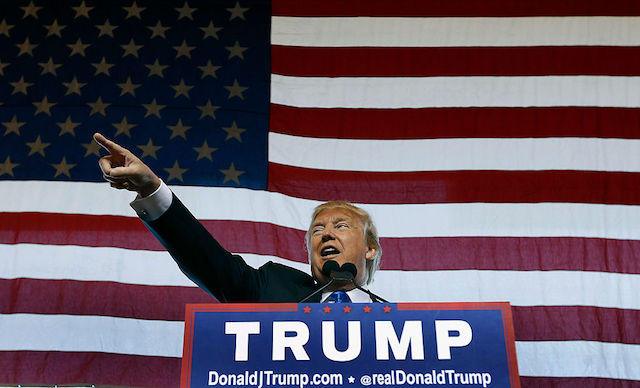 At a rally in Fresno on Friday, noted water scientist Donald Trump declared bluntly "there is no drought." The crowd cheered, encouraging him to continue ad-libbing a speech about water in California, according to the Associated Press.


"We're gonna solve your water problem. You have a water problem that's so insane, it is so ridiculous, where they're taking the water and shoving it out to sea. And I just met with a lot of the farmers who are great people, and they don't understand it. Nobody understands it. And I have friends in California, who say we have farms up here, and they don't get any water. I say 'oh that's too bad, is that the drought?' they say 'no, we have plenty of water.'"

See, California's water problem is insane. Though the drought is very real, what Trump says in the above quote is, shockingly, accurate. Because of California's antiquated system of water-rights—a claims based system that dates back to the Gold Rush—there are a lot of small farms throughout the Central Valley that receive little or no water because they are low on the list of water-rights holders. At the same time, those who hold water-claims that are higher on the list receive, and indeed waste, water regardless of the supply at hand.

You know all those signs of those signs you see while driving on the 5 Freeway between L.A. and NorCal that say 'Congress created dust bowl' or 'No Water = No Jobs'? They're born out of the same rationale.

So when Trump says "if we can bring this part of the world water... that we have," and "we're going to start opening up the water so that you can have your farmers survive, so that your job market will get better," to an audience that lives in the economically precarious, and water dependent, Central Valley, he knows he will elicit support.

Trump's claim that he will "open up the water" has nothing to do with opening up some magical tap in the Owens River Valley. Rather, it has everything to do with reworking California water law so the resource gets distributed, ironically, more fairly than it is today. Whether or not Trump actually cares about farmers in the Central Valley getting water or not is up for debate, as is whether or not an Executive Branch under DT would possess the authority to rework California water law. But Trump is a shrewd enough rhetorician to understand that a declaration that he will "open up the water" to an audience of San Joaquin Valley residents will be met with wide support.

This is what happened, something nobody else in the country quite understands.