More Speed Humps Are Coming, So Get Ready To Tap Your Brakes 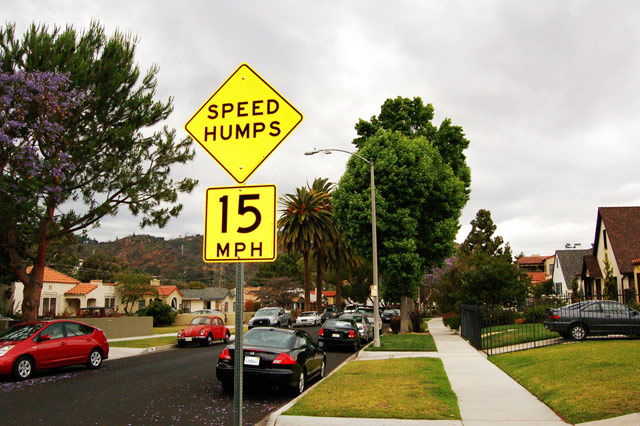 In 1994, likely spurred on by the noted documentary Speed, Los Angeles implemented the installation of new speed humps in order to curb further vehicular-speed-related terrorism. After 15 years and around 3,700 humps created across the city, the initiative died when the 2009 budget made no room for it. But City News Service reports that L.A.'s 2016-2017 budget (PDF), approved by the City Council last Thursday, includes $540,000 earmarked for a brand-new speed hump program—probably thanks to the attention drawn to Downtown car chaos as documented in last year's Furious 7.

Bear in mind that speed humps are distinct from speed bumps. Speed bumps are the angry, abrupt, prominent obstacles that stick out like acne from the asphalt. Speed humps are pleasantly nonthreatening herbivores lounging about in the road, rising gradually and gently. They're a much friendlier form of traffic control, even if revving the engine toward them would still be a poor idea. State gas taxes covered L.A.'s old speed hump program, which at its height installed humps in 200 locations annually.

Though the program has been inactive for years, city officials said that demand has remained high for the humps, with over 800 requests made between July 2013 and this past March. However, even after the latest budget, there was still an obstacle lying before the humping program, like some sort of road-based momentum-impeding device. The $540,000 was set aside for hump construction (humpstruction?), but as transportation officials told the City Council Transportation Committee today, no funding was included for staffing. The officials proposed taking half of the budget ($270,000 or so) in order to pay the salaries of employees doing the actual humping.

Transportation Department General Manager Seleta Reynolds said that resurrecting the program will take around six months: "There is a lot of legwork that needs to be done to get the word out, to make sure that folks ... across the entire city who may or may not be aware of this kind of opportunity know it, know how to use it, get assistance in applying for it if they have a good project, etc.''

Once it's up and running, the plan is to undertake 30 new speed hump projects in the coming year—two "priority" projects in each of the 15 districts. After that, projects would be prioritized based on how badly various locations need to be humped. Good news for many neighborhoods hoping to keep kids and bikers and such safe; bad news for would-be street racers and their ilk.