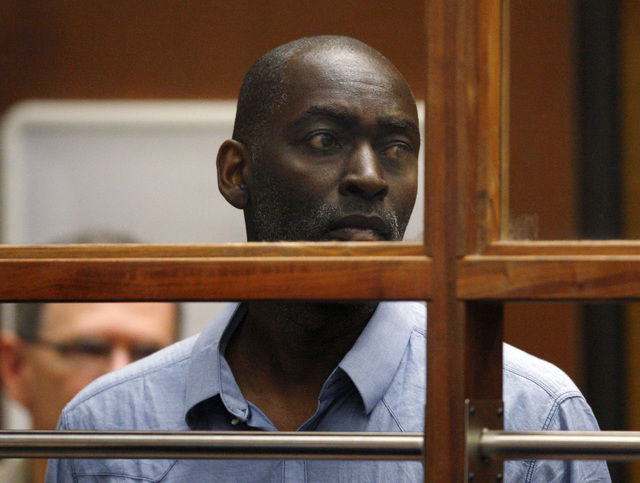 Actor Michael Jace appears in Los Angeles Court for an arraignment on May 22, 2014. (Photo by David McNew-Pool\Getty Images)

Two days into actor Michael Jace's trial for the 2014 murder of his wife, April, his 10-year-old son appeared before the jury, The LA Times reports. With a support person on hand, Nehemiah Jace, who was eight at the time of the killing, spoke of witnessing his father drag his mother into the hallway outside his bedroom (which he shared with his younger brother Caleb, who was five) before shooting her twice in the legs. Nehemiah testified that Jace said, "If you like running, then run to heaven" before pulling the trigger. Moments before, prosecutors claimed, Jace had shot April in the back in the living room of the family's home in Hyde Park.

Jace, 53, is best known for playing the heavily religious and even more heavily closeted police officer Julien Lowe on FX's vicious drama The Shield, which aired from 2002 to 2008. April Jace (nee Laune) was a prolific sprinter and worked as a counselor in the financial aid office of Biola University. The couple had been married for nearly 11 years at the time of her murder on May 19, 2014, having celebrated their 10th anniversary the previous June. April was 40 years old.

Jace's role in his wife's death is not in question; he texted his father-in-law, "Come get the boys. I shot April" that evening, and then called 9-1-1 and told police "I shot my wife" when they arrived. According to the prosecution, Jace's last words to April were a mockery of her enthusiasm for running, and he shot her in the legs so that she'd be in more pain as she died. Deputy District Attorney Tannaz Mokayef called the case "a really sad story of obsession and control," and asserted that Jace feared his wife leaving him. She pointed to a text Jace had sent April earlier that day, claiming to be at a friend's house when he was in fact at their home, as evidence of premeditation. Nehemiah testified that not long after she brought him and Caleb home from baseball practice, "My dad told my little brother to go to his room, and I went with him." An argument over finances (Jace filed for Chapter 13 bankruptcy in 2011) supposedly ensued and escalated into the shooting.

The defense plans to argue that the murder was not premeditated, and that Jace was not of sound mind at the time. "This case is not about who did it. We acknowledge it. We acknowledge responsibility,'' said attorney Jamon Hicks. "This case is about why it was done ... We're not going to provide you with an excuse. We're going to provide you with an explanation." If convicted of murder and discharging a handgun, Jace could face up to 50 years or life in prison.