Portland And L.A. Are Fighting About Penis-Shaped Doughnuts 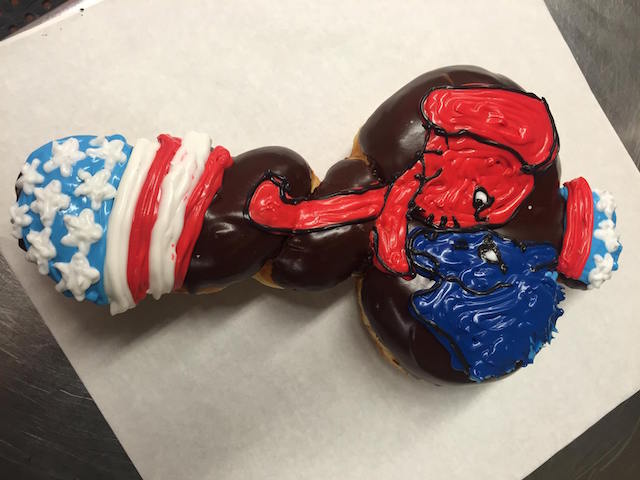 Portland tried to give us an occasionally penis-shaped gift, and some of us responded with criticism. It's time for another Not Very Serious Internet Feud.

Sometimes I wonder, how did we ever proudly assert Not Liking A Thing before the Internet? How did we let people know we don't even watch Game of Thrones, have never seen Star Wars and don't really care for pizza without it?

In an open letter to the entire city of Portland, L.A. Magazine food editor Josh Scherer told them that they could keep their "stupid novelty doughnuts." The doughnuts in question are Voodoo Doughnut's, a Portland-based dessert shop known for their apparently stupid novelty doughnuts. They decorate them like little voodoo dolls, blunts, or sometimes a penis and accompanying testicles. Juvenile, perhaps, but still just fried dough and frosting.

Voodoo Doughnut is coming to L.A., whether you like it or not, and may open up shop at Universal Studios' CityWalk in time for Halloween. If there's anywhere that stupid novelty doughnuts could take flight, it's probably there. This is a place where adults go to dress up like Hogwarts students and buy $50 wands, after all. AND IT IS FUN.

Scherer acknowledges that Portland has given us many worthy gifts, but this is a travesty. He writes:


Why, Portland? Why did you do this? You gave L.A. three absolute bangers in Pok Pok, Blue Star, and Salt & Straw, and then go and throw us a place that got famous via Travel Channel shows for sticking pretzels into anthropomorphized fried dough? Get it? It's a voodoo doll! Because Voodoo Doughnuts!

We don't need more kitschy baked goods in L.A.—we have the doughnuts-topped-with-silly-things lane covered better than any city in America—and we certainly don't need a cream-filled "Cock-N-Balls" doughnut (it totally should have been called a "dicknut" anyways).

I would have gone with "dongnut" or "Long Johnson", frankly. Or a "Pants Fritter." Wait, no. That's not good at all, my apologies.

Anyhow, this is coming from a man who created the Ramnut, that is, a ramen-doughnut culinary Portmanteau.

OregonLive, who reported the news of Voodoo's expansion, fired back:


Yes, Voodoo Doughnut's confections are gimmicky, and they are far from the best donuts we have to offer. But they're headed to L.A. because Universal wanted them. And you're complaining about gimmicky donuts coming to a tourist trap like Universal Studios? Seems like they'll fit right in.


Mmm... LOOK, DUM-DUM. We're not saying that Voodoo is anything less than a pretty good comedy doughnut—but PLEASE DO NOT EVEN PRETEND that the Universal CityWalk is some magical land of fantastic dining. Because, AHEM: Bubba Gump Shrimp Co., Hard Rock Cafe, Cinnabon, Johnny Rockets, Tony Roma's, Wolfgang Puck Bistro, and KFC Express. Voodoo Doughnut will be the least plastic joint there.

@portlandmercury @LA_mag if we have to tolerate your stupid people up here, you deserve to suck it up and tolerate our stupid doughnuts

Weirdly, many commenters countered Scherer while also insulting Voodoo Doughnut, claiming that they're all style and no substance and therefore perfect for vapid L.A. Our own commenters on this very site, known far and wide for their always polite decorum, also insulted Voodoo Doughnuts.

Meanwhile, @pdxbrocialite defends Voodoo in Medium, saying that they're at least cheap. He attributes Voodoo to the success of Portland's Blue Star Donuts. (We have one, too, in Venice.)


Voodoo is the neighborhood coffeeshop with the funky bathroom that lets employees pick the music. Blue Star is the cafe that opens up across the street that is cleaner, but charges three times as much and only plays Modest Mouse. There's room for both places, but let's not slander the one that was there first.

He also praises Seattle for accepting their "giant alien dick" landmark as an institution and putting it on T-shirts, and thinks Portland should do the same with Voodoo. Why is everything so phallic all of a sudden?

Anyhow, maybe if we can't handle Portland at their Voodoo Doughnut, we don't deserve them at their Salt & Straw. Let's all get along and eat Ramnuts and weenie-shaped donuts together, huh? After all, we need each other to fight against our real enemy, those who constantly seek to strike us down and make fun of the things we hold dear: New York.