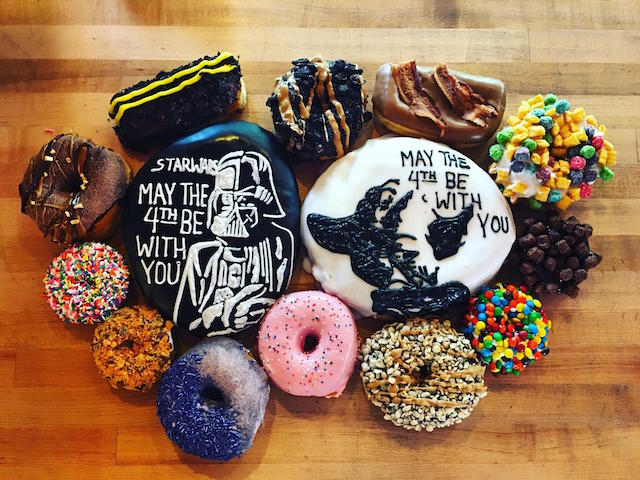 Voodoo Doughnut has locations in Portland, Eugene, Denver, Austin and Taipei already, and will open at Universal Studios Hollywood in the near future. The announcement was made during a doughnut-eating contest last Friday in Portland, according to The Oregonian.

The shop was founded by Kenneth "Cat Daddy" Pogson and Tres Shannon, who prior to deciding to go into the doughnut business, had never made one before. The pair met up with some doughnut makers in Pico Rivera, learned the art of the doughnut, and opened up their first shop in Portland.

Voodoo has a few interesting flavors we'd like to try, such as their Grape Ape—a raised yeast doughnut with vanilla frosting, grape dust and lavender sprinkles—and the Mexican Hot Chocolate. Other offerings are more like tasty novelties, such as their voodoo doll-shaped doughnut or other quirky decorating schemes.

Though we already have many quality doughnut shops in L.A., Universal Studios has not always been the sort of place one goes to eat. However, it seems like the park is really stepping up their food game, with an outpost of Chef Ludo Lefebvres' LudoBird that opened in March and some pretty good eats from Chef Eric Kopelow at the Wizarding World of Harry Potter.

Pogson told The Oregonian that the shop, which will be located at CityWalk, may be open by Halloween. Perhaps they can whip up a zombie doughnut to pair with Universal's upcoming Walking Dead attraction.