All L.A. Farmers Markets Will Be Required To Accept EBT 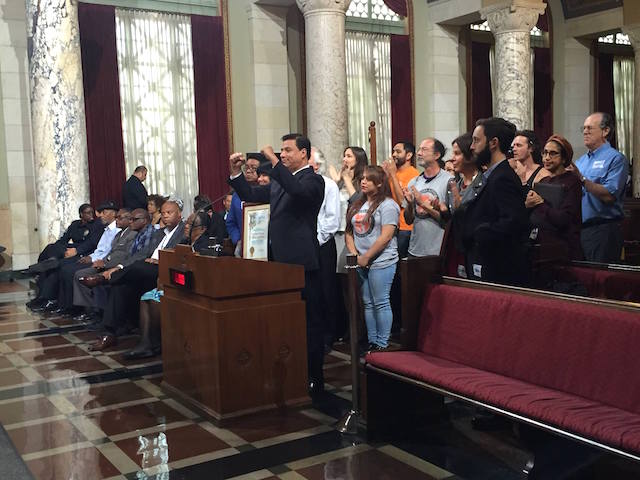 The City Council voted Friday to require all L.A. farmers markets to accept CalFresh/EBT as a form of payment, increasing access to healthy food for low-income Angelenos across the city. The unanimous vote is being hailed by community groups as a victory in the fight for food justice.

KPCC reports that well over a million people in the L.A. area rely on CalFresh (formerly known as food stamps) to buy groceries each month, and even more are eligible for the program. Yet—until now—almost half of L.A.'s farmers markets didn't accept EBT as a form of payment (EBT is the electronic system through which CalFresh benefits can be accessed).

Ariana Alcaraz, an organizer with the Los Angeles Community Action Network, tells LAist that the seeds for the campaign, which was led by LA CAN and the Los Angeles Food Policy Council, were first planted four or five years ago, when LA CAN initially began to engage with downtown farmers markets about accepting EBT. The organization found that lobbying individual markets directly was often unsuccessful, so, as Alcaraz said, "If we were asking farmers market managers to do it and they weren't accepting EBT, there would have to be some sort of rule that would force them to do it."

The formal effort began a year ago, when her organization joined forces with the Los Angeles Food Policy Council, and found a champion in Councilman Jose Huizar. Huizar, who Alcaraz said listened extensively to the community's concerns, introduced the motion in council.

"Many parts of L.A. are considered to be food deserts, where grocery stores are very few and far between," Alcaraz told LAist. "LA CAN is based in downtown and skid row, and the closest grocery store to us is Whole Foods, and then Ralphs, both of which can be very expensive," she said, explaining that EBT access at farmers markets will allow low-income Angelenos to access to healthy food that they might otherwise be unable to find at corner stores or other nearby markets.

But the benefits will also extend beyond individual EBT-users. According to Alcaraz, part of the reason having EBT access at farmers markets is so important is because it enables people using food stamps to contribute directly to the local economy and support local vendors. The Los Angeles Food Policy Council reports that EBT access aids the sustainability of a farmers market, attracting new customers and significantly improving a market's longterm viability.

"[This] is a small action that will have a huge impact for individuals and families citywide. By requiring EBT at all farmers markets, we are one step closer to closing the gap in food access and addressing food insecurity for low-income Angelenos,” Huizar said in a statement. Today's vote directed the city attorney to draft an ordinance on the measure, which will then be approved by the City Council before becoming law.