Monkey Town, A Pop-Up Dinner Inside A Cube, Is Coming To L.A. 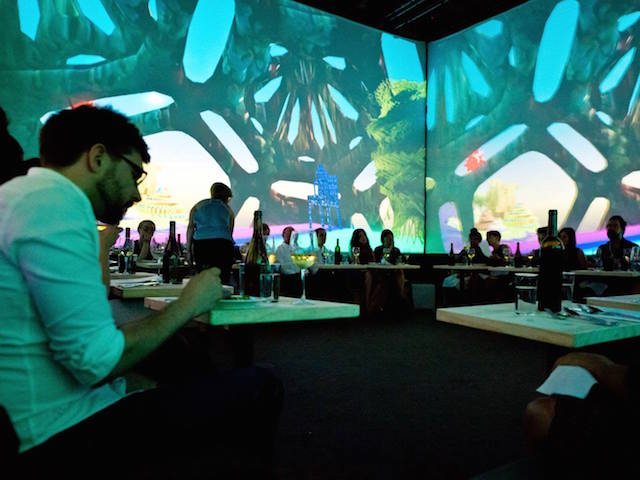 The dinner will be located downtown in a former fabric warehouse that comes in at 10,000 square feet. However, the guest list is capped at 40 people each night. Inside the warehouse will be a giant cube. Diners will sit inside, while videos from 16 artists play one after another on each side of the cube. Each seating will also feature an 18-minute performance from various artists, a list of which can be found on the event's homepage here. A few booked artists include Opera on Tap, White Magic and Tearist.

Food will come via Chef Nick Montgomery, with four-course meals on Tuesdays and 5-course meals Wednesdays through Sundays. (Veggie, vegan and gluten-free meals are available upon request.)

Monkey Town owner Knott tells LAist what diners can expect from the experience:

Imagine a multi-course dinner, where nobody over-explains each dish and you simply eat very tasty food, discreetly served, while an explosion of sound and vision surrounds you. Then imagine that instead of facing forward, like a traditional movie theater, you're all facing each other, lifting forks or spoons from the same dish, while your eyes dart between three screens and someone across the cube is mesmerized by the screen behind you. And then imagine, not 10 or 15 courses, but just 5 courses, 5 easy pieces, that tell a short story without being prosaic—a delicious story that doesn't try to hard. I think this project attempts its own kind of wabi sabi. There is something more potent than perfection.

Monkey Town went on for a decade in New York, for several years in Brooklyn before shutting down due to landlord issues in 2010, then popping up in Manhattan in the summer of 2013. It's visited Denver, Barcelona and Austin in the past. Their run in Los Angeles will likely be Monkey Town's last, as Knott is preparing to shoot a feature film in Guatemala.