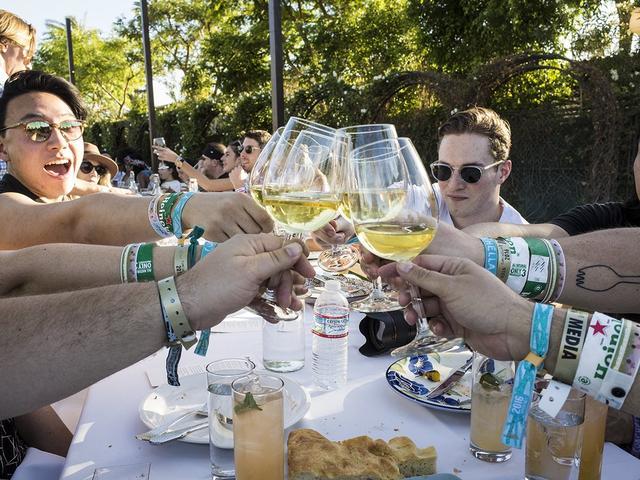 Outstanding in the Field at Coachella (Photo by Annie Lesser/LAist)

This October's Desert Trip festival in Indio may boast an impressive lineup of the elder statesmen of rock, but the newly unveiled food offerings aren't too shabby either. The festival will feature over 30 rock stars from the food world, including some L.A.'s best chefs.

As Bob Dylan, the Rolling Stones, Paul McCartney, Neil Young, and The Who & Roger Waters take the stage for the three-day fest—perhaps unfairly dubbed 'Old-chella'—fans and foodies will be treated to an impressive array of dining options, including pop-up restaurants, sit-down dinners and even beer, wine and cocktail pairings. And while Coachella had a pretty great food lineup, this one really turns things up to an 11.

Angelenos will recognize lots of familiar names in the chef roster from some of the top restaurants in town. There's Ludo Lefebvre of Trois Mec, Kris Morningstar of Terrine, Michael Voltaggio of ink, Chris Oh of Hanjip, Dakota Weiss of Estrella, Michael Hung of Viviane, Phillip Frankland Lee of Scratch Bar and Gadarene Swine, Curtis Stone of Maude, Jason Neroni of Rose Cafe, Duff Goldman of Duff's Cakemix, Steven Fretz of Church Key, Christian Page of the now-closed Short Order, Guy Turland of Bondi Harvest, Ilan Hall of Ramen Hood, and Marcel Vigneron of the recently opened Wolf. There will also be plenty of big name chefs coming in from New York, San Francisco and beyond, with more chefs expected to be added to the lineup as the weekend approaches.

Concert-goers will have the opportunity to sample dishes from many of the chefs at individual stalls, as well as from some pop-up restaurants. And similar to Coachella, you can purchase tickets to Outstanding in the Field dinners, which offer a sit-down, multi-course feast.

And lest we forget the booze, there will be extensive craft beer options curated by Greg Koch of Stone Brewing, wine selections and tastings from award-winning sommelier and winemaker Rajat Parr, and cocktails from L.A. nightlife impresarios Cedd Moses (Normandie Club, Seven Grand, etc.) and the Houston Brothers (Break Room 86, Good Times at Davey Wayne's, etc.). Each will also offer a curated food and drink pairing package, available by the day for each type of alcohol or bundled all together. They won't be cheap—think $129 to $179 plus fees per person per day—but hey, nobody said this trip to the desert would be a bargain.

More details and packages will be added in the coming weeks. To learn more and to purchase tickets beginning this Monday, go here.