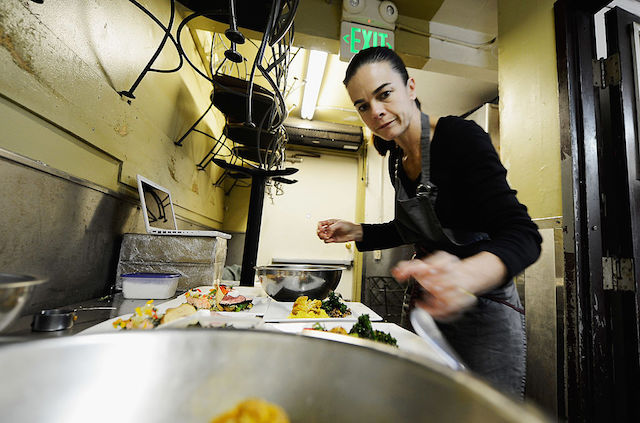 Los Angeles had a very good night at Monday's James Beard Awards. The national chef and restaurant awards, which are given out by the James Beard Foundation, are essentially the Oscars of the restaurant business.

According to the L.A. Times, last night's triumphant run "comes after last year's relative silence," when the region's only award went to Oaxacan restaurant Guelaguetza.

L.A. restaurateurs Michael Cimarusti of Providence and Rustic Canyon's Jeremy Fox were also nominated in the Best Chef: West category, and Jon & Vinny's was up for a design award (the honor ended up being awarded to two New York City restaurants, Bruno and Untitled).

Travis Lett was nominated for his Gjelina cookbook, but had the unfair disadvantage of being in the same category as chef and cookbook author Yotam Ottolenghi (Ottolenghi, Jerusalem, Plenty), who everyone and their mother is currently obsessed with, admittedly for good reason. In a shocker to no one, Ottelenghi won for his 2015 cookbook Nopi.

Homeboy Industries founder Father Gregory Boyle was awarded the James Beard Foundation's Humanitarian of the Year award earlier this year, and L.A. also received its fair share of love at the James Beard Foundation's media awards last month. Food evangelist, Everybody Loves Raymond creator and local Angeleno Phil Rosenthal's PBS show I’ll Have What Phil’s Having took home the award for best on-location television program. Netflix show Chef's Table, which is helmed by a quartet of L.A. directors (David Gelb, Clay Jeter, Brian McGinn, and Andrew Fried), was honored in the visual and technical excellence category. Full disclosure: I sublet Brian's apartment for four months in 2010, used up all his printer ink and didn't replace it, among other tenant failings. Brian, congratulations, and please consider this my public apology.

But back to the important business at hand. The James Beard Foundation was founded after cookbook author and teacher James Beard's death in 1985, and the awards were established in 1990. Last night's ceremony was held in Chicago for the second consecutive year after a long run in New York.

In a slightly awkward turn of events, our neighbors to the north in San Francisco took home a grand total of zero awards, further confirming L.A.'s dominance as the state's capital of food, culture and a bunch of other things that I will be able to remember after I have another cup of coffee.