Cafe Gratitude Owners Say They're Getting Death Threats From Vegans

The L.A. vegan scene is in turmoil after the proprietors of one of the most highly regarded vegan eateries were found to be eating and 'harvesting' animals at their farm in Northern California.

Bay Area couple Matthew and Terces Engelhart own Cafe Gratitude, which has long been revered by vegans and hated by people who don't like to order dishes by saying, "I am elevated." But even for non-vegans, the restaurant is considered a fine place to get a good, plant-based meal—even Beyonce has eaten there. The couple also founded Gracias Madre, and their daughter Mollie co-owns Sage Organic Vegan Bistro with actor Woody Harrelson.

The Engelharts had been vegetarians for 40 years and vegans since 2003, a year before the first Cafe Gratitude opened in San Francisco. In 2015, however, Terces wrote on the couple's Be Love Farm website that they had decided to abandon the vegan life and return to eating meat. One post from March 2015 shows Matthew eating his first burger in over 40 years. 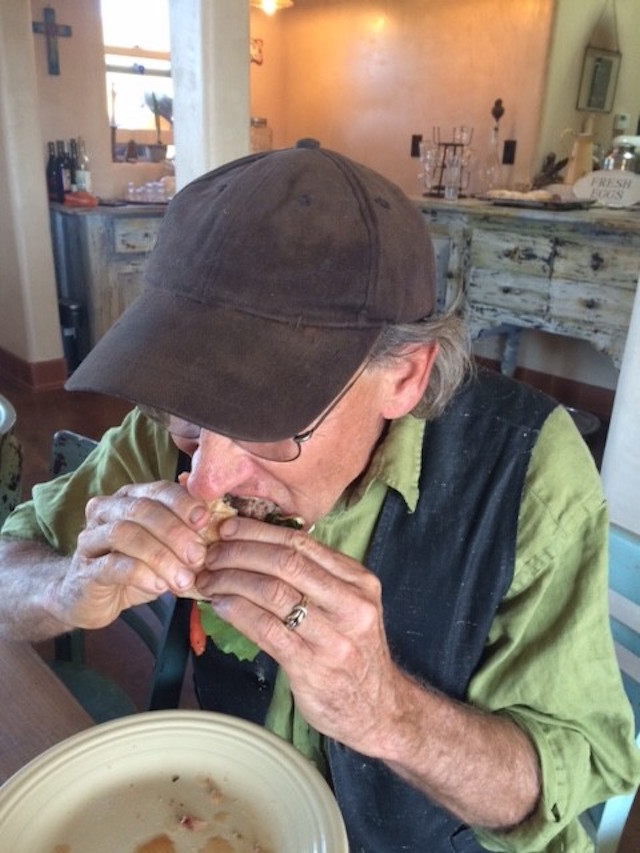 According to a release, the couple decided to change their diet after launching their private farm/residence in Vacaville and discovering that maintaining a sustainable, organic farm meant they needed animals to produce manure. Matthew also wrote further about their decision, explaining it's chill to eat cows now because Jesus:

Perhaps I've failed to explain adequately why I would pursue the path of eating flesh after 40 years of vegetarianism. The answer is non-violence but non-violence to the whole system, all species. Agriculture is most violent destructive force on the planet. It has caused the extinction of more species then any other activity. Earth balance margarine is made from Canadian canola. Organic or not this product required a plow to destroy Canadian prairie an act of violence against burrowing owls, ferrets, prairie dogs, dozens of insect and bird species. If that prairie had been maintained in grassland with well managed cows or buffalo those species would not be killed or displaced.

30% of the world’s surface is grasslands, Grasslands need herds of ruminants to thrive, when they are removed, the grasslands degenerate into desert. Desertification is violence against all species including humans. The conflict in Syria and Iraq can be easily tied to desertification, mismanaged soil. Herding ruminants are our best tool to restore fertility to the earth, keep the earth covered, and reverse desertification and climate change. If I knew of a better or even another solution, I would choose it. We need cows to keep the earth alive, cows make an extreme sacrifice for humanity but that is their position in God’s plan as food for the predators. Cows maintain the grass, predators maintain the herd by culling the weak and sick. We can be part of that sacrament. Sacrifice is part of life. As in the passion of Christ, we all have to spill our blood for humanity to know the Father. The cow’s sacrifice was been ordained, ours we must choose.

While the farm does occasionally supply seasonal fruits and veggies to the restaurants, it's considered a separate entity, and people who live and work there are free to eat whatever they like. Cafe Gratitude and Gracias Madre have continued to be entirely organic and plant-based.

Los Angeles' vegans, for the most part, went on eating at Cafe Gratitude and Gracias Madre none the wiser until last week, when the blog was rediscovered. Racecar driver and vegan Lelani Munter tweeted out the news to her over 25,000 followers:

Then the old-new news was posted on My Vegan Journal with the headline 'Cafe Gratitude and Gracias Madre Founders Send Animals to Slaughter,' and rapidly circulated around the vegan community, according to L.A. Magazine.

From My Vegan Journal:

Sadly, it seems that Matthew and Terces Engelhart, founders of Cafe Gratitude and Gracias Madre, have decided to do just that.  After being vegetarian for over 40 years, they’ve now decided to kill the animals on their farm, package them up, and eat their bits and pieces. On the very same land that grows produce for their vegan restaurants, and their daughter’s restaurant, Sage Vegan Bistro.

As one might imagine, this caused a real shitstorm of open letters, negative Yelp and Facebook reviews and, apparently, death threats. 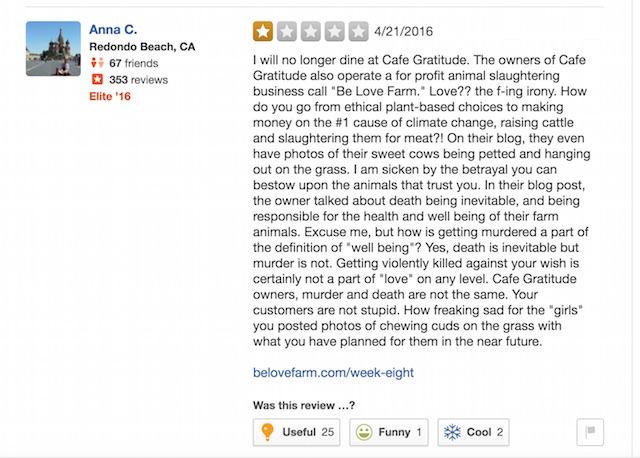 It's easy to understand how someone who is an ethical vegan (as opposed to someone who is a vegan for health or allergy reasons) would feel duped to find this out, even though it was posted over a year ago.

Carrie Christianson has started a Facebook boycott group, telling the Hollywood Reporter, "The reason we're so upset is that veganism is a belief system. You are patronizing a restaurant that you think has that philosophy and it turns out it doesn't. Vegans should know that this restaurant has a farm that slaughters animals."

It's harder to understand the death threats the Engelharts say they've been getting. If being a vegan means respecting all life, then threatening to kill a couple humans for their decision to reverse their diets seems pretty hypocritical.

"People have taken up the mob mentality," Engelhart told the Hollywood Reporter. "It saddens me that the choices we made in the privacy of our home would lead people to feel so betrayed that it's elevated to threats on our lives. I'm very discouraged."

The biggest gripe doesn't seem to be, however, that they're eating meat in their own homes. It's that they own a farm, so there's some concern that the couple is profiting on the slaughter and sale of animals, while pocketing the money of vegans who didn't realize that this was going on. Some have argued that their decision to abandon veganism should have been more transparent or publicly posted.

The first Cafe Gratitude in San Francisco in 2004. At that point, they had been vegetarians for 40 years and vegans for about a year. In 2011, they opened up in Larchmont Village, then Venice, the Arts District, San Diego and Newport Beach. Gracias Madre opened in 2014.