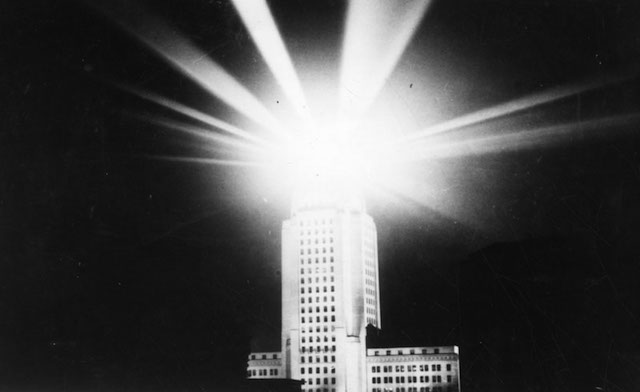 For decades, L.A.'s iconic City Hall towered over the rest of the city—and city leaders wanted to keep it that way.

The 28-story neoclassical building was dedicated on April 26, 1928—88 years ago today—and due to a municipal height ordinance, it held court high above the rest of the city until the early 1960s. City Hall remains one of L.A.'s most iconic structures, despite no longer being among its tallest. Here's a brief history of the building, and its reign. 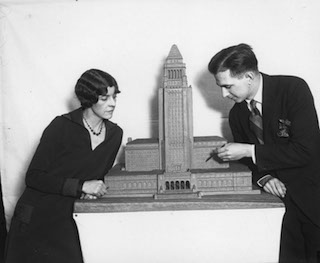 Model of Los Angeles City Hall. (Photo courtesy of the Los Angeles Public Library Photo Collection)
A municipal ordinance intended to give the city "harmonious lines" prohibited the construction of buildings taller than 13 stories or 150 feet in height until the late 1950s—making City Hall a rare, towering exception.

As John Pastier, a former L.A. Times architecture critic, wrote in 1973, "fifteen years ago, you couldn't see the Los Angeles skyline from the City Hall observation deck, because you were in it."

For most of the early 20th century, nothing in the flat skyline of yesteryear L.A. compared to City Hall.

The 1904 height limit was rigidly enforced with few exceptions, and "as a result, Los Angeles' sky line present[ed] a series of long, low lines instead of the rearing, jagged contours of most large American cities," according to Los Angeles in the 1930s: The WPA Guide to the City of Angels, a Depression-era guide to the city compiled by Works Progress Administration writers.

The height regulations were adopted for a number of reasons, but they were primarily aesthetic. The WPA guide puts particular emphasis on the city's growing reputation as "a health and resort center famed for fresh air and sunshine," positing that city leaders "felt it would be a mistake to erect tall buildings that would create traffic congestion and run the streets into dark, narrow canyons—conditions which people from the East were trying to escape."

According to Nathan Masters, the height limit, which was incorporated into the city's charter in 1911, "resonated with the then-ascendant City Beautiful movement."

Although Los Angeles' "tendency to spread and sprawl has been more or less unrestrained, the city has strangely enough denied itself the right to soar," as the WPA guide put it. The height ordinance wasn't overturned until 1958, and radical changes to the city's skyline didn't come until the late 1960s. 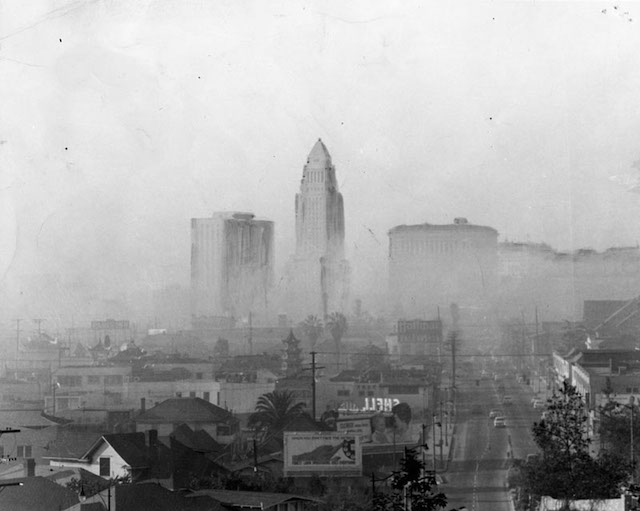 The building at 200 N Spring Street, which occupies an entire city block and is reputedly built on the former site of a Tongva village, is actually Los Angeles' fourth City Hall. 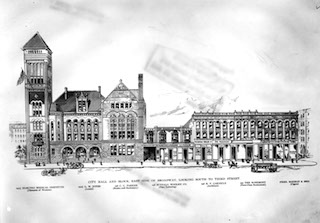 Rendering of the former City Hall on Broadway. (Photo courtesy of the Los Angeles Public Library Photo Collection)
When the city of Los Angeles was incorporated in 1850, it didn't have a single public building. City and county offices were originally located in a small adobe structure across the street from the present City Hall location. L.A.'s third—and penultimate—City Hall was a three-story Romanesque structure on Broadway, built in 1888 and torn down in 1929.

Construction on L.A.'s iconic (and fourth) City Hall was authorized through a bond issued in June 1923. Architects were commissioned in August 1925 and ground was broken on March 4, 1926, according to the July 1928 issue of Architectural Forum.

But back to the beginning: Civic leaders in the nascent L.A. of the 1920s were "keen to declare their city the most modern metropolis in the land." Los Angeles was their boomtown, and they were true-blue boosters. And what better way to announce their city's impending seriousness than with a soaring skyscraper? 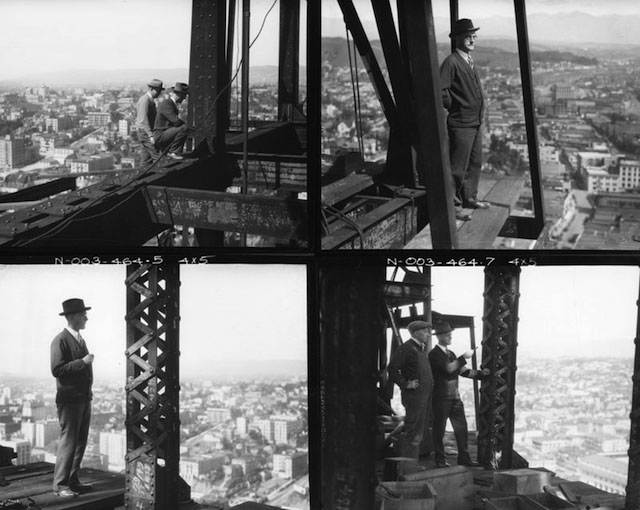 
[City leaders] pointed with pride to the amazing speed of its growth and development—its rise from a sleepy cow town of some ten thousand people in 1880 to an upstart city of one hundred thousand in 1900 and then to a bustling capital of the region in 1920, with upward of half a million residents. That number would double by decade's end. Everything was new in Los Angeles; the city seemingly contained little cultural or architectural baggage tying it to old ways of life... In 1928 a brand-new City Hall opened as fitting testament to all this forward thinking. Standing almost five hundred feet tall, the building may not have rivaled the skyscrapers of New York or Chicago, but its sleek white tower atop Bunker Hill soared above Los Angeles. Its modern art-deco-inspired style, brilliantly illuminated at night by the "Lindbergh beacon" that topped it, easily ascended as a visual status symbol for the metropolis. 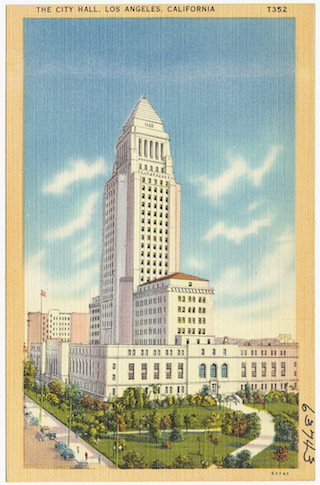 The structure's sleek terra-cotta tower was modeled on the Mausoleum of Mausolus, one of the seven wonders of the ancient world, and, as Starr wrote:


There was something deliberately Babylonian, an echo of the set built a decade earlier by D.W. Griffith for Intolerance on the corner of Sunset and Hollywood boulevards, in the way that the City Hall tower, at 464 feet the tallest structure in the city, tapered into an Halicarnassan ziggurat at its apex.

Even the materials evoked the mythos of the California dream: the concrete composing the tower was sourced from sand originating in each of California's 58 counties and water from its 21 historical missions, according to Eternal Spring Street: Los Angeles Architectural Reincarnation.

The original program from the opening day dedication read:


This monument symbolizes the soul of a struggling, fighting, building people, never knowing defeat and always climbing upward, until today it may be said of them:

This is their City. They have created it; they have transformed it from a sleepy Spanish-California pueblo to one of the mightiest communities of a continent.

Upon completion, Los Angeles City Hall had the largest lighting and power switchboard on the Pacific coast, with 129 miles of wire and a switchboard with capacity for 2,000 telephones, according to Architectural Forum.

The dedication of City Hall was commemorated with an elaborate three-day celebration that was produced by theater impresario Sid Grauman and billed as "the largest civic parade ever attempted by a city of western America," according to a 1928 L.A. Times story.

The parade procession was several miles long, and included 32,000 marchers, 34 bands, hundreds of floats and "the entire motion-picture industry."

From the White House, then-President Calvin Coolidge pressed an electric button to turn on the Lindbergh beacon atop City Hall via telegraph. As Starr wrote, the grand building "portent[ed] of the city-to-be."

The height ordinance was overturned in 1958, but City Hall wasn't officially dethroned until 1966, when the 516-foot Union Bank building opened its doors at Fifth and Figueroa. The Union Bank Building, which was also designed by A.C. Martin and Associates(!), was hailed as "Los Angeles' first modern skyscraper." 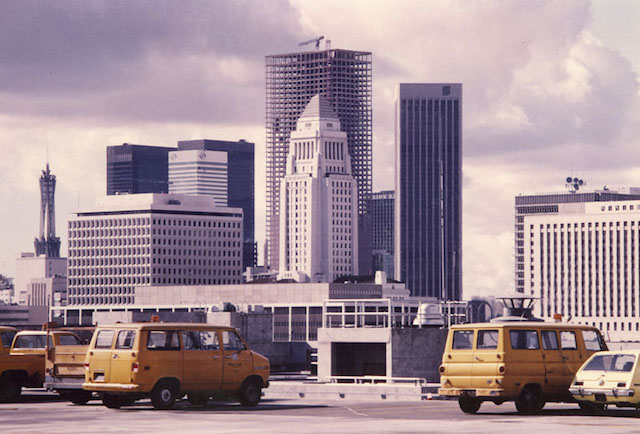 Los Angeles in the 1970s. (Photo by Tom LaBonge (!) and courtesy of the Los Angeles Public Library Photo Collection)

By 1973, the skyline status quo had changed spectacularly, due not just to the repealed ordinance, but also a "long building boom and advances in earthquake-resistant construction," according to Pastier. That same year also gave rise, quite literally, to a 62-story United California Bank building (now Aon Tower), which soared above the city at almost double the height of City Hall. According to Pastier, City Hall's height had already been beaten or equaled 15 times by the time the United California Bank building went up, and the still-sprawling metropolis suddenly had a downtown with a more "focused, urban look." The city's skyline has been remade several times over since then, and the 72-story Wilshire Grand Tower will soon reign as the city's tallest structure.

In the meantime, you can admire the city's glorious and ever-changing skyline from City Hall's own observation deck. The observation deck, which circles around the building's 27th floor, is free and open.

Related: Who Decides When City Hall Gets Lit Up For A Special Occasion?