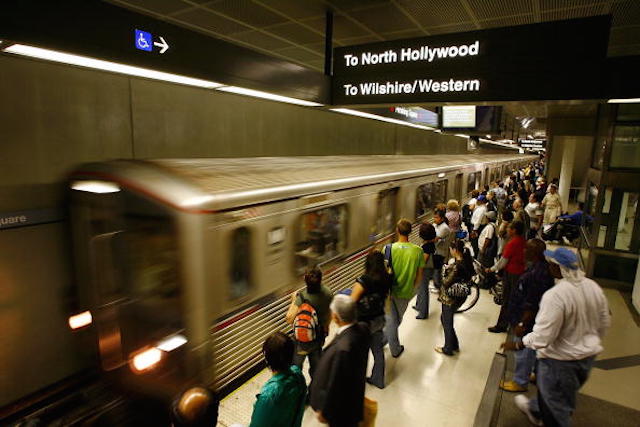 (Photo by David McNew/Getty Images)
The upper middle class trend blog formerly know as the New York Times has hit a new low in their inane coverage of the world's greatest city, which, considering the inanity of previous L.A. coverage, is really saying something.

Despite existing across the country from our fair city for the paper's entire 164-year-old existence, the New York Times only recently discovered Los Angeles. Now, they arrive with increasing frequency, like colonists in some strange land, here to cherry-pick cliches and make grand, misguided pronouncements about the natives. Recent dispatches have included inanity about breakfast, inanity about East Coast emigres, and inanity about pedestrianism, to just barely graze the surface. So much for all the news that's fit to print! Our friends (and friendly rivals) over at Curbed LA even created a bingo board for the very purpose of quantifying their scorn for the Gray Lady's western forays. We highly recommend taking it for a spin.

The latest affront began when travel writer Lucas Peterson set out to "marry the city’s organic cuisine and healthy, active lifestyle with something that it isn’t widely associated with — leaving a small carbon footprint — by ditching the car and creature comforts of regular hotels." He discovered that L.A. has a reliable public transportation, amidst all the yurts and kale:


I discovered that it’s possible to rely on the Metro, Los Angeles’s imperfect but quite functional public transportation system, which includes buses, a light rail system and, yes, even a subway. I was able to find a comfortable yurt — that’s right, the traditional Central Asian round tent — in a quiet, wooded part of the city accessible by light rail and just minutes from downtown. And all while saving some money in the process. 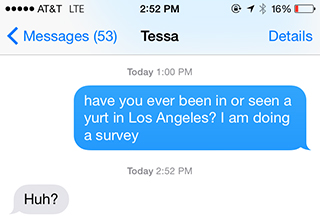 That's right, a yurt. In Mt. Washington. Found on Airbnb for $98 a night. As Peterson writes, "It turns out that while I find saying the word 'glamping' to be slightly nauseating, the actual act is very pleasant."

I, on the other hand, find this entire description nauseating:


The yurt is set on a raised platform in a quiet, hilly section of Mount Washington, a neighborhood in northeast Los Angeles known for its steep and winding streets. The owners left the keys and some lovely touches: tea and coffee, an electric kettle, a French press, even a bottle of inexpensive wine. There were travel books in the night stand, as well as a small portable heater. The back door led to the outdoor bathroom and shower area, with a dry composting toilet (and instructions for how to use it) as well as a sink and shower with a “gray water” system (it runs off and feeds the plants in the garden; the hosts provide all-natural soap). 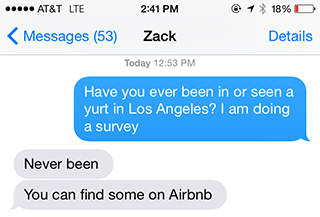 In an effort to counter my own subjective, ironic-yurt-hating view of the city, I informally surveyed a dozen other native Angelenos and found that not a single one had ever been in a yurt in the city, or used a dry composting toilet. My mother, who is not a native Angeleno, did say that she once saw a yurt in Topanga in the '70s.

When not busy dry-composting their own shit or finding authentic food and deals at Grand Central Market, he and his girlfriend Brette also found time to take the Red Line:


My girlfriend, Brette, and I rode the long escalator into the bowels of the subway station at Santa Monica Boulevard and Vermont Avenue. “Wow,” she said, “I can’t believe this exists.” It does feel strange to ride the subway in Los Angeles because it dispels the one huge stereotype nearly everyone subscribes to: that you need a car to get around. “And it’s so quiet and clean,” she said, touching her Metro Tap card to the turnstile (subtracting the $1.75 fare) and going through.

I am unfortunately not smart or funny enough to make this up.

At one point, Peterson and Brette embark on "an epic trip." They take the bus from downtown to Venice. They survive, and then make their requisite stop at a vegan, macrobiotic restaurant that specializes in bowls. "I was surprised by how flavorful it was," Peterson writes, adding that "the balsamic miso dressing certainly helped." And then things really get weird.

Embracing a phenomenon pulled directly from the celebrity interview playbook, Peterson and Brette go foraging. For food. Like all Angelenos do on the reg:


But why pay at all for your food when you can snack free on the plants and flowers that grow all around you? That’s the philosophy of Pascal Baudar, a Belgian-born forager and wild food consultant. He leads regular classes and excursions into Los Angeles’s forested areas in search of edible plants, mushrooms and flowers.

Brette and I paid $20 each to join him one morning close to the Tujunga Wash, near the Angeles National Forest in the far northern part of the city. Our group of six began a leisurely stroll through the forest, and Mr. Baudar stopped to point out dozens of plants that have culinary uses: bright yellow mustard flowers, elderberry, curling dock and watercress.


Later, we sipped on a homemade soda he had made from elderflowers and munched on our trove of wild plants. I was learning that Los Angeles’s sprawl and geographical diversity work for it in many ways. They yield an impressive breadth of eco-friendly activities, which, with a little work, can take place without spending one minute in a car.

Wow. Just wow. Like Twitter DMs from an ex or certain reality TV shows, these Times dispatches are objectively awful, and yet we can't help but kind of hate-savor them. Maybe we just like the attention?

Sidenote: A quick Google search reveals that Lucas Peterson actually lives in L.A., a fact which we are all still struggling to wrap our heads around.