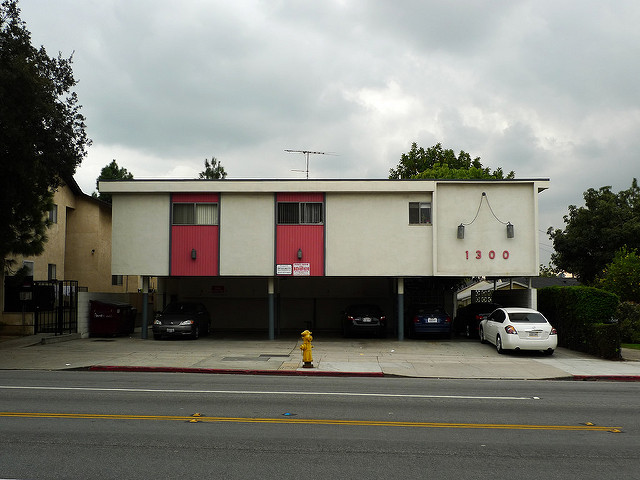 A dingbat in Glendale. (Photo by Britta Gustafson via the LAist Featured Photos pool on Flickr)

City inspectors have released a list of 13,500 apartment buildings across Los Angeles that are in need of earthquake retrofitting.

The L.A. Times reports that these wood-frame structures, called "soft-story" buildings, became popular in postwar L.A. Also known as "dingbats," these boxy, midcentury buildings described as "an inhabitable parking structure" were an inexpensive counter to Craftsmen-style homes and bungalows. But many of them were shoddily built, and might not be able to withstand The Big One (or, a not-so-Big One for that matter).

According to the Times, building officials "sifted through tens of thousands of city records and walked block-to-block to identify" dingbats they believed to be unsound, and informed the owners that they needed to retrofit their buildings.

"Tenants should know, if they're renting an apartment, how safe those apartments are," Larry Gross, executive director of the Coalition for Economic Survival, said.

But it ain't cheap, and some of those costs will be passed on to those tenants, too. In January, the L.A. City Council voted to allow landlords pass on half of the costs associated with seismically retrofitting a potentially unsafe building to their tenants.

You can find out if your building is on the list by entering in your address here on this handy graphic from the Times. Good luck.