Weather At Coachella Is Going To Be Gnarly This Weekend 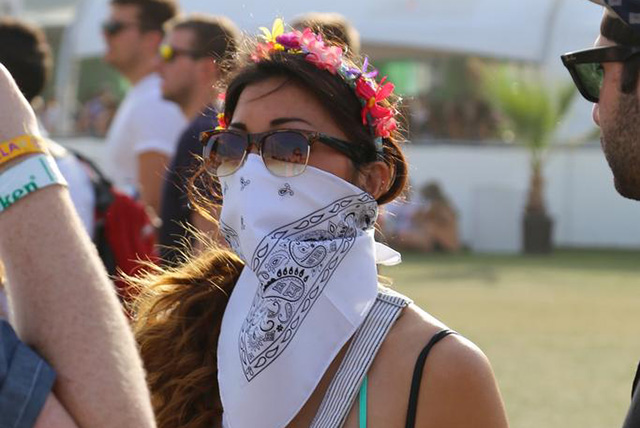 Angelenos heading inland today for weekend one of Coachella should brace themselves for high winds and a whole lot of dust.

The National Weather Service issued a high wind warning for the Coachella Valley and surrounding regions, predicting that wind speeds could reach 35 miles per hour with possible 60 miles per hour gusts. The advisory also warned of blowing dust and sand, which could reduce visibility to less than one quarter mile at times. An inside source told LAist that the upper portion of the festival's main stage will be lowered if winds exceed a certain speed, which is standard protocol and not unique to this year's festival.

Though every Coachella weekend is of course its own unique snowflake of an experience that can never be replicated—or even fully understood—by those who weren't out there on the polo field with you, we would be remiss in not mentioning the epic #windchella conditions of 2013 and 2014.

The good news? It will be hot this weekend, but not brutally so. Temperatures on Saturday and Sunday are expected to top out at 90 and 92, respectively.

According to the Desert Sun, music festival officials sent a notification to festival goers Thursday, reminding those who will be camping to secure their campsites and take the tops off pop-up tents. The advisory is expected to last until 11 a.m. Saturday.

The National Weather Service has also warned of potentially hazardous travel conditions on the I-15 and I-10, along with Highways 111, 247 and 395. All hold-on-to-your-flower-crown-jokes aside, we at LAist would like to remind you that driving during a wind advisory can actually be pretty scary.

Here's some advice from our friends at the DMV, per the ever-trusty California Driver's Handbook: