A Brief History Of The Iconic Bungalows Of L.A.

by Jen Carlson in Arts & Entertainment on April 15, 2016 12:00 AM
Tweet
The bungalow, one of the most iconic and desired housing units in Los Angeles, is—like the palm tree—not native to this land. Well, not exactly. The history of the rather simple structure is complex. Throughout time they've been beach homes, retreats, vacation pads, affordable housing, and eventually an L.A. idyll.

Adrian Scott Fine, of the Los Angeles Conservancy, tells us, “Perhaps no building type is more synonymous with early Los Angeles than the residential bungalow. It was largely a product of Southern California in response to our climate and the growing Arts and Crafts movement of the early 20th Century.” In fact, by the early 1900s companies like Sears "established themselves as purveyors of the ready-cut home," and were selling Bungalow kits! In addition, a 1912 catalog was put out by the Los Angeles Investment Company, who also jumped on "bungalow fever" by offering plans for "practical bungalows."

According to Arts & Crafts Homes, "The climate was perfect for a rambling 'natural' house with porches and patios... but there were sociological reasons for the American Bungalow’s birth in California. Los Angeles and upscale Pasadena, an 1890s resort town, were growing fast. By 1930, Los Angeles would have more single-family dwellings that any comparable city, with 94% of its families living in single-family homes! An essential part of this mass suburbanization was 'an innovative, small, single-family, simple but artistic dwelling; inexpensive, easily built, yet at the same time attractive to the new middle-class buyer.' Enter the California Bungalow, a term that was in use by 1905 if not before." 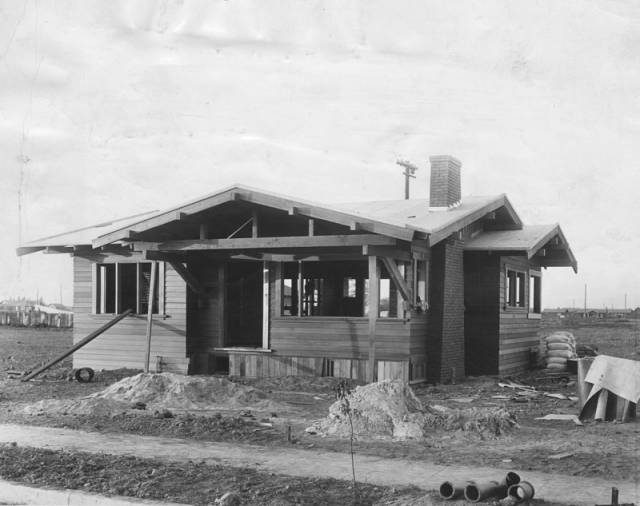 "One of five new bungalows built in one week on 83rd Street by the Southern California Home Builders." (Photo courtesy of the Los Angeles Public Library Photo Collection)

The California Bungalow is, of course, unique to these parts, but it's adapted from a previous design: the OG baṅgalo came from India. California's version added fresh features and took on a life of its own.

The earlier incarnation of what you probably think of when you think of an L.A. bungalow can be found in Pasadena, in an area that is referred to as Bungalow Heaven, which became Pasadena’s first historic Landmark District in 1989. According to the District's website:

The 16-block area, bordered by Orange Grove and Washington boulevards and Lake and Hill streets, is a historic gem set in the midst of Pasadena. Although the district includes residences from most periods of Pasadena’s history, the overwhelming majority of the homes are bungalows built during the Arts and Crafts period of the early 20th century.

The Arts and Crafts movement stood in opposition to the increasing industrialization of the time, emphasizing the artistry of the individual craftsman and the subtle beauty of nature. The bungalows of Bungalow Heaven reflect these principles through their unique architectural details and the wide use of natural and native materials. The typical bungalow is one-and-a-half stories high, with an open floor plan, wide verandas and a sloping roof. The interior features many built-ins, including cabinets, shelves and seats.

These were the average bungalows people were living in, which according to Los Angeles A to Z, "featured a simple one-story construction with wooden siding; a low-pitched, gabled roof and wide eaves; a front porch; and an airy interior. The style was more or less invented by the talented Greene brothers with the 1903 Bandini house in Pasadena. The most outstanding example is the more elaborate Gamble House (1908) in Pasadena." These examples are considered the "high art paradigm of the Arts and Crafts movement." The Greene brothers created what we can call the "ultimate bungalow," bringing the homes to a luxury level. 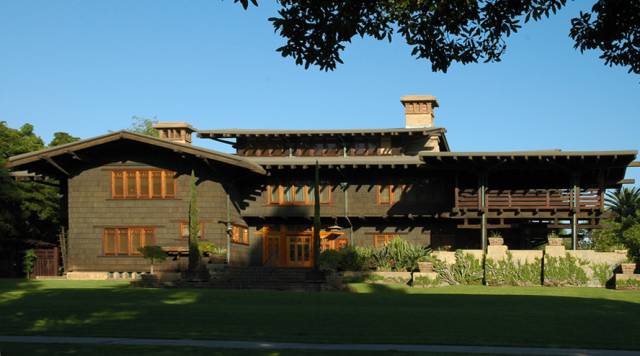 The Gamble House. (via Wikipedia)

The neighborhood was ground zero for the "Bungalow Boom" of the early 20th century, and it's also where Bungalow Courts first sprung up. That's because Pasadena's City Council passed "regulations requiring all multi-family housing in the city to be centered on a landscaped courtyard." In Charles Moore's book City Observed: Los Angeles, he writes: "The California Bungalow begat the bungalow court. As automobiles increased, the bungalow court begat the motel, but it also gave rise to a unique courtyard apartment scheme that began in Hollywood and flourished through the 1920s and '30s. Despite an increase in density, these residences allowed everyone from retired Midwesterners to movie stars to live year round in the warm climate."

By the 1930s, bungalows were no longer a popular option, and by the 1950s, many were razed and replaced with dingbats. But today the remaining ones are a desired housing option (and what many picture moving in to when they move to L.A.)

According to KCET, C.E. White, author of The Bungalow Book (1923), commented on the "numerous styles to fit under the 'bungalow' designation. This included the Prairie Style, produced by Frank Lloyd Wright and his followers between 1900 and 1930, and Spanish Colonial style, popularized by San Diego's 1915 Panama California Exposition, that quickly took off in popularity by the 1920s in California. For White it was the interior floor plan, committed to efficiency and flow, that defined the bungalow, rather than its exterior ornamentation and organization."

Here's a visual breakdown of what you mostly see around L.A. 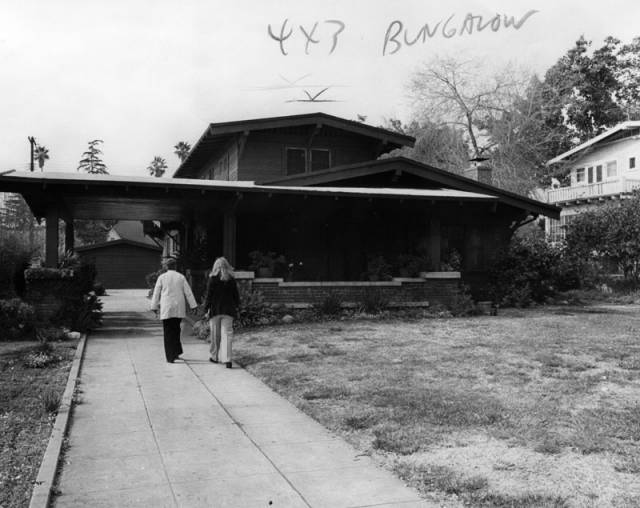 "This early 20th century Craftsman bungalow in a middle income neighborhood in Pasadena on February 16, 1976, is noted for its brick-and-wooden porch and pagoda-style roof. "(Photo courtesy of the Los Angeles Public Library Photo Collection) 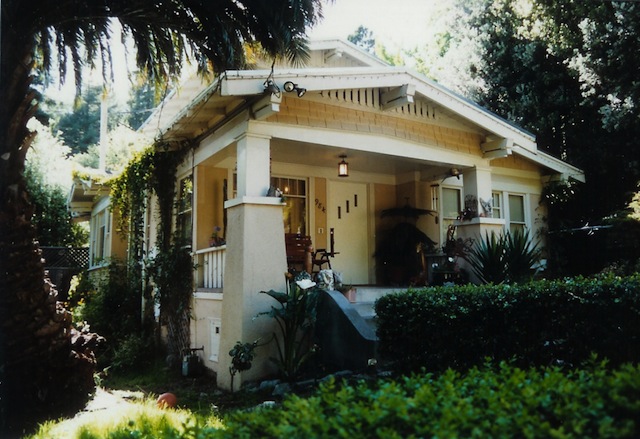 This one is from San Francisco, fittingly, as "many books list the first California house dubbed a bungalow as the one designed by the San Francisco architect A. Page Brown in the early 1890s." (via Wikipedia)

This was the California Bungalow that Sears offered in their kits: 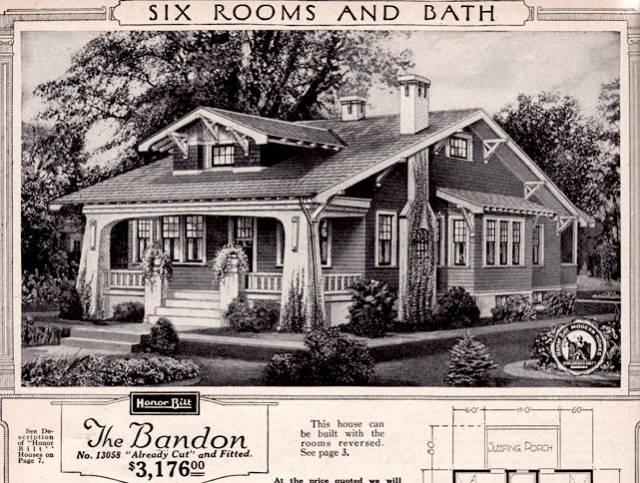 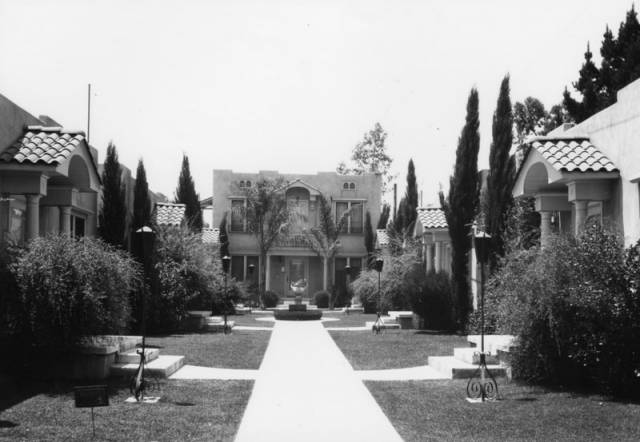 Click through the above gallery for some more examples, including a firehouse bungalow, and bungalows made of old street cars!