L.A. Taxi Trips Plummeted By Nearly A Third, Thanks To Uber And Lyft 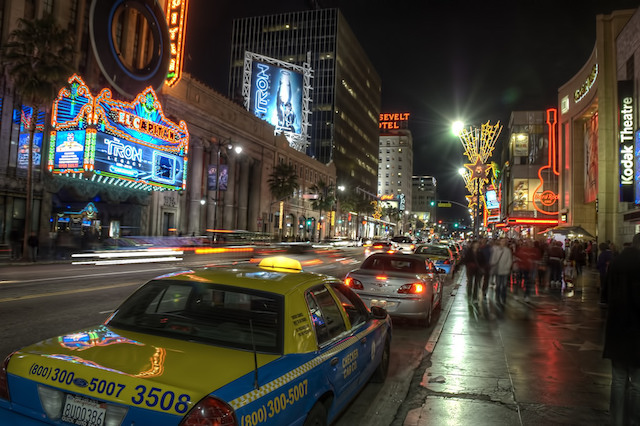 (Photo by Neil Kremer via the Creative Commons on Flickr)

It's not quite a technical knockout yet, but recent data confirms that Uber and Lyft have landed some heavy punches against the city's taxi industry. An L.A. Times analysis of city records shows that the number of L.A. taxi trips arranged in advance has fallen by nearly half since ridesharing services began operating in Southern California three years ago. The total trip count has also declined by almost a third. The city's taxi industry started feeling the hit almost immediately after low-cost ridesharing services appeared on the scene. According to data from the UCLA Labor Center, L.A.'s taxi industry saw a steady increase in rides after the recession, but began to decline in 2013. The New Yorker reports that in the first quarter of 2014, right after the lower-cost UberX began operating in Los Angeles, conventional taxi rides dropped by about 20%.

Taxi industry declines are by no means unique to L.A., but our city's sprawl dictates unique consumer-use patterns for ride-hire services that differ from other cities. L.A.'s taxi industry is roughly 85% dispatch-driven, according to Gabe Klein's Start-Up City (compare that with D.C., where approximately 90% of taxi business results from a traditional street hail). In a city spread out over 503 square miles, L.A. consumers are far more likely to call for a taxi than hail one, making our city's taxi industry potentially more vulnerable to hail-based ridesharing services than other cities, by design.

Some citygoers might cheer the slow-motion death of an industry that many see as outdated and over-regulated, but, as L.A. taxi commission president Eric Spiegelman told the Times, individual drivers have borne the brunt of the downturn, especially because many of them drive full-time (the majority of Uber and Lyft drivers drive part-time, supplementing income from other jobs). "The drivers are taking a hit, a big hit, and it’s really painful," Spiegelman said.

As the Times explains:


Although numbers can vary dramatically depending on where and how often drivers work, the typical taxi driver has traditionally taken home about $40,000 a year after taxes and fees, said Jeannine Brands, a city engineering associate who specializes in taxi data.

Like their start-up competitors, taxi drivers in L.A. are independent contractors, but they pay to rent their vehicles and dispatch systems from the city's nine licensed companies. Those rental fees have remained steady, even when the the number of trips they're making has dropped.

And despite being independent contractors, L.A. taxi drivers are still burdened by industry's onerous regulations, which many argue have left them unable to compete with agile start-ups (California law dictates that local governments regulate the taxi business as a public utility).

The UCLA Labor Center reports that in 2014, Los Angeles taxi cabs logged 1.4 million trips less than the previous year, resulting in $17.1 million revenue losses, which translates into an estimated loss of 221 taxi industry jobs for the city, and an overall loss of 319 jobs county-wide.

Paul Ezadjian, 56, a manager for LA Checker Cab, told the L.A. Times that many of his drivers have seen their trips fall by as much as 40%, a decline that means many taxi drivers now take home $400 to $500 per week, down from $800 a few years ago.

“For a consumer, Uber is very good, but for the driver, it’s very bad," Ezadjian told the Times.