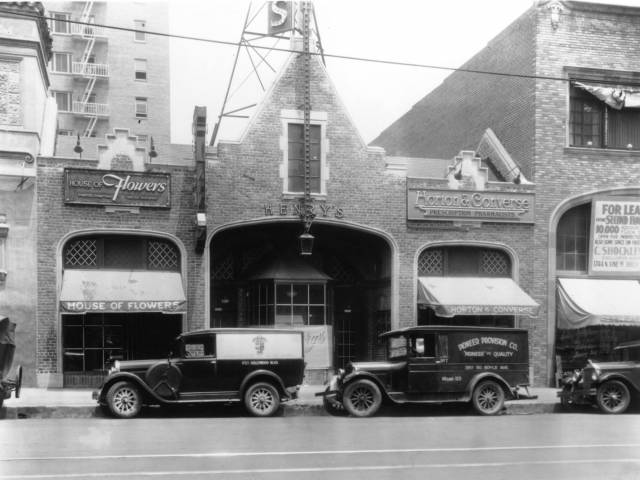 "Henry's restaurant on Hollywood Boulevard, which was financed by Charlie Chaplin when it first opened. circa 1930." (Getty)

Before the Rat Pack took up a booth at Dominick's (RIP), the stars of the 1920s and '30s were headed to Henry's. (This was just before the second Brown Derby—the most popular with celebrities due its proximity to studios—took off.) The restaurant, opened in the mid-1920s, was owned by silent film actor Henry Bergman, and financed by his fellow silent film star and friend Charlie Chaplin.

Bergman was said to have won over Chaplin by being a bit of a yes-man to the often moody star—according to Tramp: The Life of Charlie Chaplin, he "soon rewarded Berman's loyalty by setting him up in the restaurant business. Henry's grew from its origins as a coffee shop to become one of the most popular lunch spots in Hollywood." And from there, a late night hangout.

According to The Story of Hollywood, "Henry's, at Hollywood and Vine's new development on George Hoover property, had the distinction of being the first Hollywood restaurant to stay open after midnight. Financed by Charlie Chaplin, Henry Bergman ran it. A late night hangout for Hollywood celebrities, it was Al Jolson's favorite spot to eat after the Friday night fights at Legion Stadium." In a look back at Bergman's life, it's noted that "Henry would often go from table to table talking with customers, with his ever-present cigar dangling from his mouth. Charlie, who was fascinated by the success of the restaurant, was a regular customer. His favorite dishes were the lentil soup and coleslaw."

There's little information available on it, though apparently the food was "basic," as noted in You Must Remember This: Life and Style in Hollywood's Golden Age. One anecdote we found featuring the joint guest-starred Clark Gable, who had just arrived in Hollywood:

While at Henry's, Bellamy's co-star Gable came into the restaurant and sat next to him. After Gable ordered his meal, Bellamy, in his autobiography, When the Smoke Hit the Fan, says their exchange went like this: "What do you think of all this out here?" [asked Gable] "I don't know yet," I answered. "I haven't been here long enough to form an opinion." "I just got eleven thousand dollars for playing a heavy in a Bill Boyd Western," he exclaimed. "Eleven thousand dollars!" he went on, almost in disbelief. "No actor's worth that. This can't last." — from Dear Old Hollywood

Located at 6315 Hollywood Boulevard, the building that housed Henry's seems to have been since torn down (here's a current view of the strip). Myrna Loy was also a regular at Henry's, and once recalled, "That's when Hollywood was still quite nice. Hollywood was just a little town. It still is except it's terribly run down now. It was brighter then, with an easier quality about it, more like a little Spanish town."