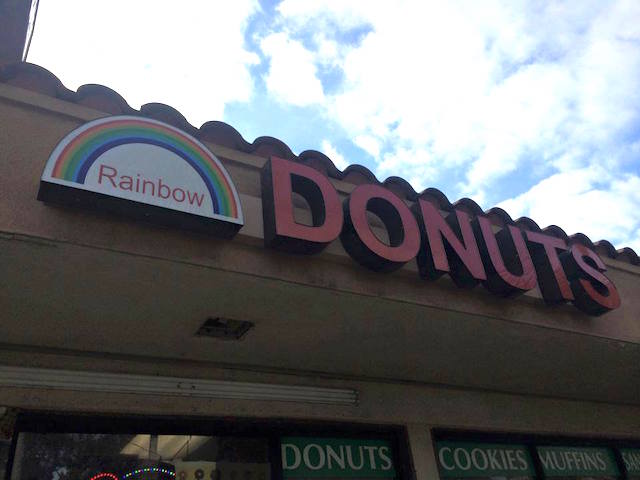 Remember when we got our Dunkin' Donuts in Santa Monica and everyone stood in really long lines? It seems so far removed, now that we have so many Dunkin' Donuts. But over in a West Covina strip mall known as South Hills Plaza, a little doughnut shop is standing up against the chain eatery, the L.A. Times reports.

In 2017, a Dunkin' Donuts will open near Rainbow Donuts, which has been in business for the past 28 years. Rainbow's dedicated fan base is rallying around the shop, signing a petition titled, "Say No To Dunkin Donuts!!!" They cite the delicious bakery treats and the kindly shop owner, Sing Yam, as reasons for coming in morning after morning.

Harry Jarvis told the Times that Yam has remembered his name since the first time he came in the shop and has a great rapport with regulars.

"She sees people pull into the parking lot and she has their coffee and donut ready for them when they walk in," he said.

Tom House, who has been going to the shop since 1988, said that Yam even helps him put his drops in his eyes.

Yam and her family were Cambodian refugees, first fleeing to Thailand, only to be returned to Cambodia. They went to Thailand again, this time successfully traveling from Thailand to California. Yam worked a series of odd jobs until she saved enough money to purchase a Yum Yum shop, then transformed it into Rainbow Donuts.

While Yam is being reserved about her feelings towards the chain competition, her supporters are taking up the cause. They plan to demonstrate at the planning commission and City Hall until Dunkin' goes somewhere else.