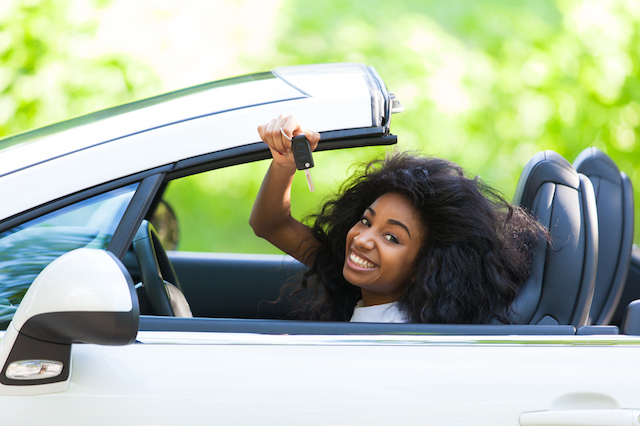 A new rideshare app for women drivers and women passengers is poised to launch nationwide. Naturally, some men are weirdly mad they have to continue using the same ol' ridesharing platforms they've been using.

Boston-based Chariot For Women was scheduled to launch on April 19, but that date has been pushed back to sign up more drivers, according to Fortune. Already over 4,000 women have already signed up to drive, while many women are waiting to give the no-surge-pricing app a try.

"By the time we launch, we will have tens of thousands of women signed up," founder Michael Pelletz told Forbes.

The app should launch in Boston this week, and in other cities soon after.

Pelletz, a former Uber driver, was inspired to create the app after a harrowing incident with a passenger and input from his wife. Pelletz, according to the app's website, became an Uber driver after his father was diagnosed with a brain tumor in 2013. Pelletz worked at his dad's business, but the business went under with his father's health, so Pelletz became an Uber driver to make cash on the side.

One night, a young man got into Pelletz's backseat and began incoherently mumbling about his grandmother's house, writhing around in the backseat and fading in and out of consciousness. Pelletz eventually located a police officer and got help, but found himself wondering what a woman might do in a dangerous situation. He also noted that when he first began driving and expressed how much he enjoyed it, his wife told him she might also like to drive, but was too nervous to do so. Pelletz's wife, Kelly Pelletz, is now President of Chariot for Women.

The way it works is fairly simple: only women are allowed to drive, and women and children under 13 are allowed to ride. Notably, the app is inclusive to transgender passengers.

When a rider makes a request, both she and the driver will receive a 'safe word.' The driver will say the word when she pulls up, and if the word matches, the passenger will know she's at the right car. The app, similar to other ridesharing platforms, will also show the user a photo of the driver, plus provide the car's make and license plate number.

Of course, some people—men, mostly—are already complaining about the service and accusing it of being discriminatory and possibly illegal. 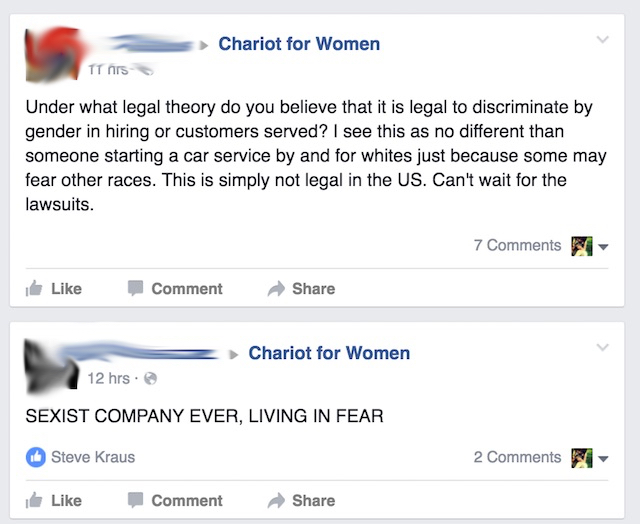 California-based attorney and National Coalition for Men VP Marc Angelucci told KTLA that the app "sends a very sexist message that men are creeps. It actually punishes men for what only a very small number of men do."

I suppose by 'punishes,' he means that men will have to continue to drive for or take Uber, Lyft or one of the other readily available ridesharing services that they've likely already been using without incident. So, basically, Chariot for Women will actually affect them in no way other than the knowledge that a thing exists that isn't for them.

When it comes to legitimate legal concerns, lawyer Dahlia C. Rudavsky told the Boston Globe that the app might run into trouble, especially when it come to the company's strict policy against hiring men:


To limit employees to one gender, you have to have what the law calls a bona fide occupational qualification. And that's a really strict standard. The law's really tough on that. For gender, it's not enough to say, 'we really just want to have a female here because our customers prefer that to feel safer.'

A similar app, SheTaxi, launched in New York City two years ago, but had to shut down because they were unable to meet customer demand and because of men alleging discrimination. They intend to relaunch, using the name SheHails, according to ABC News.


We want to show there's inequality in safety in our industry. We hope to go to the US Supreme Court to say that if there's safety involved, there's nothing wrong with providing a service for women.

But here's the real question:

Related: What It's Like To Drive Uber Or Lyft When You're A Woman