Located just on the border of Venice and Marina Del Rey, the new brewpub—known as "The Propagator"—features a restaurant, retail shop and, of course, a diverse range of Firestone Walker's celebrated beers, including some speciality pours that will only be available on tap in L.A. The location will also eventually include an onsite brewery—once permitting is finalized in the coming months—where they will brew and serve experimental rustic ales. These barrel-conditioned and unfiltered beers will offer an unrefined character distinct from Firestone Walker's offerings at their locations in Paso and Buellton.

"The whole idea is to propagate new beers, propagate new ideas and tell our story in a market where we sell most of our beers," David Walker—who founded the brewery in 1996 with his brother-in-law Adam Firestone—tells LAist. "You can come here and try 30 different beers from a range of different styles, yeasts, and disciplines."

At the bar, you'll find several beers making their first on-draught appearance in Los Angeles, including Unfiltered DBA, a variation on their flagship Double Barrel Ale, which is completely fermented in oak casks instead of only partially. You'll also find Hammersmith IPA, which has only been available at their other breweries, as well as the coveted Parabola Imperial Stout. You'll also encounter several of their Buellton-brewed Barrelworks Wild Ales, including Bretta Weisse and the brand new Feral One.

Unique to the L.A. location, you'll find cask-conditioned beers—the traditional style that doesn't use additional nitrogen or carbon dioxide pressure—available from two beer engines. The cask taps were custom built for the brewery by 21st Century, who designed and installed their entire tap system here and at their other location. You'll find beers like Dunkel Weizenbock, a collaboration with Pacific Gravity homebrew club, as well as Walker's Reserve, a bourbon-barrel smoked imperial porter. The beers are served in the same pub glasses in which you would traditionally be served a British ale. "What's great about this beer is that because it's not carbonated it has different flavors, some of them are more pronounced, some of them are less," explains bar manager Jay Sanders. 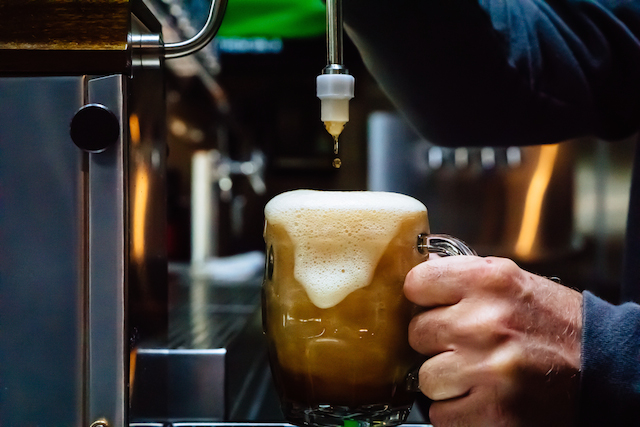 Good to the last drop, the cask pour (Photo by Lynn Millspaugh/LAist)

The Propagator restaurant also features a full menu, that includes a wide variety of options for carnivores and vegetarians alike to pair with their beer. You'll find pizzas, including a BBQ brisket and a broccoli ricotta variation, as well as a range of salads and shareable plates like jerk chicken wings and drunken shrimp. You'll also encounter taco options like DBA-braised pork belly or cauliflower, and then there are bigger bites like the tempeh bánh mì, the Bear's burger, and the Lion's fish and chips—each taking their name from the company's logo and ferocious spirit animals.

The design of the space will be familiar to those who have visited Firestone's other locations with Firestone's signature rustic, brewery-borrowed touches. "If you look at all three locations, it's like seeing someone's children: all three are different, but you've got the same DNA in all three of them," Walker tells LAist. There are stools made from steel barrel rings, walls adorned with barrel staves once used to age their beer, and barrel ends embedded in the wall just beneath a giant flat-screen TV. One of the biggest draws, so to speak, are what Walker calls the two "beer vortex" booths, circular seating crafted from stainless steel brew tanks from the Paso brewery meant to encourage a communal experience.

For those looking to take something home, the retail shop across the parking lot will offer bottles, cans and growler fills, along with plenty of Firestone Walker clothing and other gear. There you can pick up the brewery's signature beers, as well as hard-to-find special releases and limited runs. Once the onsite brewery is up and running—which Walker hopes will be before the end of the year—they also plan to collaborate with local brewers and homebrew clubs around Los Angeles to experiment with new ideas and develop special run beers.

Walker, who along with co-owner Firestone comes from a wine-making background, explains their focus on experimentation and development, "Our brewery is driven from the brewhouse, our brewers drive the beers, which is a winery gestalt." He goes on to tell us that the focus of the new L.A. location will likely evolve as they receive feedback from the local community. "You create the place and then you listen to the people who come for about, say six months, and then you tweak things. Some stuff you thought would work, doesn't work, some stuff you don't have, you've gotta find."

Firestone Walker Venice is located at 3205 W Washington Blvd, Marina del Rey. The restaurant is open 5 p.m. to 11 p.m. daily with extended hours for lunch coming in May. The brewery store is open 10 a.m. to 6 p.m. daily.