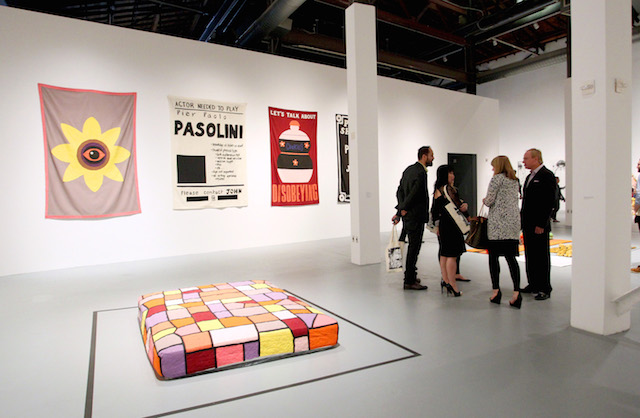 'Mike Kelley' exhibition at The Geffen Contemporary at MOCA on March 28, 2014. (Photo by Rachel Murray/Getty Images)

The Mike Kelley Foundation for the Arts announced its inaugural grant recipients Tuesday, and the soon-to-be-funded projects are nothing short of awesome, in the true sense of the word. Though we would expect nothing less, in keeping with Kelley’s legacy.

The critically acclaimed Kelley, who died in 2012, loomed large over the L.A. art scene, having lived and worked in the city since the mid-1970s. The foundation’s inaugural Artist Project Grants awarded a total of $310,000 to nine L.A. nonprofits. The nine projects will include an exhibition of political posters that explore police violence against people of color from the Center for the Study of Political Graphics, a Los Angeles Filmforum screening series developed by visiting international artists, and a playable miniature golf course addressing zoning issues on Skid Row, among others.

“Whereas some funders are risk-averse, we hope to be risk-friendly,” the foundation said in a press release. The foundation chose to focus their initial round of funding on the L.A. arts community because of Kelley’s “enormous influence” on a generation of L.A. artists, specifically seeking out work that otherwise might have been difficult to fund due to its content or complexity.

The miniature golf course project is a collaboration between artist Rosten Woo and the performance group Los Angeles Poverty Department. The interactive exhibition, entitled “The Back 9: Golf and Zoning Policy in Los Angeles,” will take up residence downtown at the Los Angeles Poverty Department's Skid Row History Museum and Archive in early 2017. The usual miniature golf landscape of windmills and waterfalls will be replaced by buildings and other symbols of current and historic zoning issues in the area, according to the L.A. Times.

The Los Angeles Filmforum series will highlight the work of significant but underseen international artists, many of whom have never before shown in Los Angeles because of cost and logistical difficulties. The screening series will take place in assorted venues around the city, ranging from traditional cinemas to university campuses, as well as galleries and artist-run spaces.

Mike Kelley Foundation executive director Mary Clare Stevens told the L.A. Times that the Artist Project Grants are “in line with Mike's concerns and an incredibly important part of his legacy.” Other recipients include the Echo Park Film Center, Frogtown’s Clockshop, the Mistake Room and Coaxial Arts Foundation in downtown L.A., Pasadena Arts Council/KNOWLEDGES, and the in-flux Santa Monica Museum of Art.