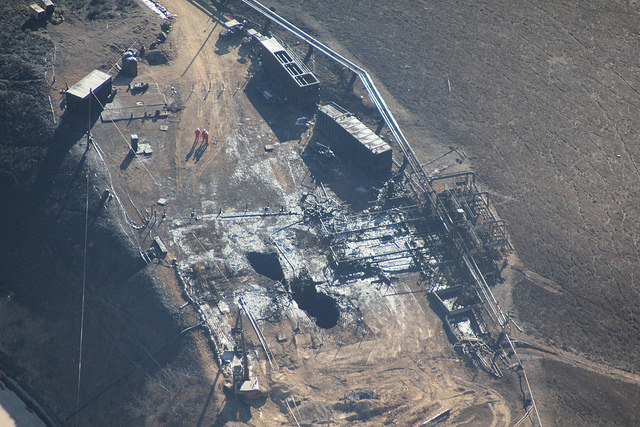 As a result of the disastrous Porter Ranch gas leak, Southern California might see up to 14 days of blackouts this summer.

According to an official report (.pdf) released Tuesday, officials warn that the shutdown of SoCalGas' Aliso Canyon facility could lead to the 14 scheduled power outages in the region this summer. "We do not anticipate rolling blackouts," Robert Weisenmiller, chair of the California Energy Commission, told the L.A. Times. "We do anticipate that we may have scheduled outages."

The report—authored by the California Public Utilities Commission, California Energy
Commission, the California Independent System Operator, the LADWP and SoCalGas—says the Aliso Canyon gas storage facility is operating at less than one-fifth of its 86.2 billion cubic feet capacity. Currently, only 15 billion cubic feet are in storage in Aliso Canyon, and no new gas is being allowed to be injected into the facility until all 114 wells are inspected for their safety, reports KTLA.

The gas is crucial for the summer months, when electricity demand spikes. The Aliso Canyon facility supplies gas to 17 power plants in Southern California, including two in Orange County. A particularly hot summer would increase the risk of a gas shortage, leading to the scheduled blackouts. "These pipelines also cannot transport gas fast enough to meet the hour-by-hour or changing demands of power plants during the summer when electricity demand peaks," Mark Rothleder, vice president of the California Independent System Operator, told the Times.

Millions of people in Los Angeles, Orange, San Diego, Riverside, and San Bernardino counties could be affected by the blackouts.

Officials also released a report on Tuesday that outlined 18 steps that could be taken in order to prevent scheduled blackouts from occurring. These include increasing public awareness of energy conservation and offering rebates.

"We can all help get through this tough period by conserving energy, making our buildings more efficient, and taking other actions that reduce our use of electricity and natural gas," Mayor Eric Garcetti said in a statement.

The gas leak at the Aliso Canyon facility released up to 100,000 metric tons of methane—a greenhouse gas—into the atmosphere and forced the evacuation of thousands of families from their homes in nearby Porter Ranch.