Amber Rayne, Adult Actress Who Spoke Out Against James Deen, Dies At 31 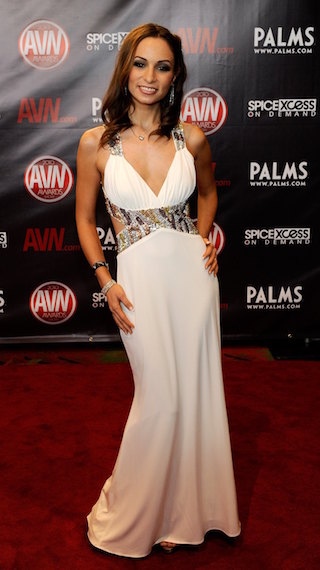 Amber Rayne arrives at the 27th annual Adult Video News Awards Show at the Palms Casino Resort January 9, 2010 in Las Vegas, Nevada. (Photo by Ethan Miller/Getty Images)
Amber Rayne, a semi-retired adult actress who worked for a decade in the adult film industry, died over the weekend in her Sun Valley home at age 31, authorities said.

Rayne, whose legal name was Meghan Wren, was pronounced dead at 3:15 p.m., Ed Winter, the assistant chief of the Los Angeles County coroner's office, told the Los Angeles Times. Paramedics were called to her home after a report that she had collapsed. A friend was with her at the time. An autopsy is pending, but her death is being investigated as a possible accident or overdose.

AVN reports that the Detroit native had previously acted in non-adult films before she entered the industry in 2005, racking up 500 credits. She won many AVN awards, including the 2009 award for AVN's "Unsung Starlet of the Year." She announced her retirement last April.

She still continued to perform, produce, edit and direct, especially with collaborator Stormy Daniels, but she also owned a horse farm and taught riding, according to AVN.

Last year Rayne was one of many women to come forward to say that they had been sexually assaulted by James Deen. She was clearly torn about whether to speak up, but she did so since so many other women had. She told The Daily Beast that she was able to befriend him afterward: "There's a friendship that's developed. I don't want to betray or lose that, but at the same time this did happen, and it happened to other people that I know and love."

Rayne said she did a scene with Deen that took a brutal turn in which he punched her twice in the face and sexually assaulted her in such a way that her rectum was ripped, bleeding and in need of stitches. Deen called this retelling "distorted," but Rayne says when she brings it up as a joke "you can see it makes him physically uncomfortable when I do, so he does realize something was wrong that day."

After news broke of Rayne's death, there was an outpouring of support from the adult film community:

Amber Rayne was a complex person. Full of passion. She brought me many joyful days over the decade I knew her. She will be missed.

Sad to hear about Amber Rayne passing. She always had a positive attitude and was a credit to our industry.