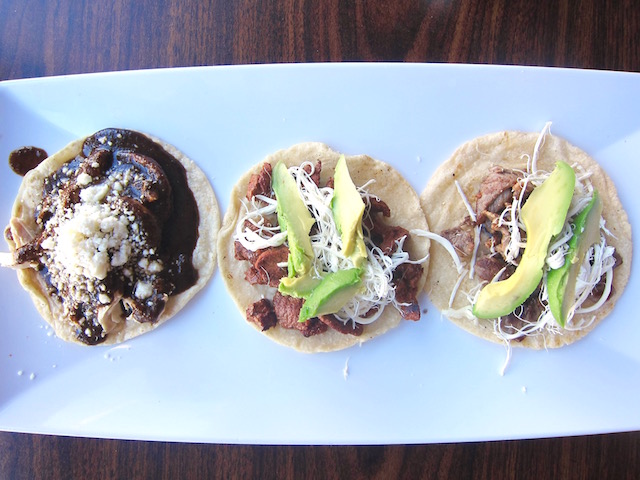 There's a very good chance that you could walk right past Tlayuda L.A. without realizing that there are some mouthwatering Oaxacan tacos being served inside.

The hole-in-the-wall eatery, which seats about 20, is situated on Santa Monica Boulevard near Western Avenue, next to other mom-and-pop shops. Tlayuda L.A. takes an elevated approach to their food. The tortillas are all handmade, the ingredients are fresh and there are many vegetarian-friendly options for customers. Even the black bean puree that is spread on some of their dishes doesn't contain lard, something that often gets added in Mexican beans. 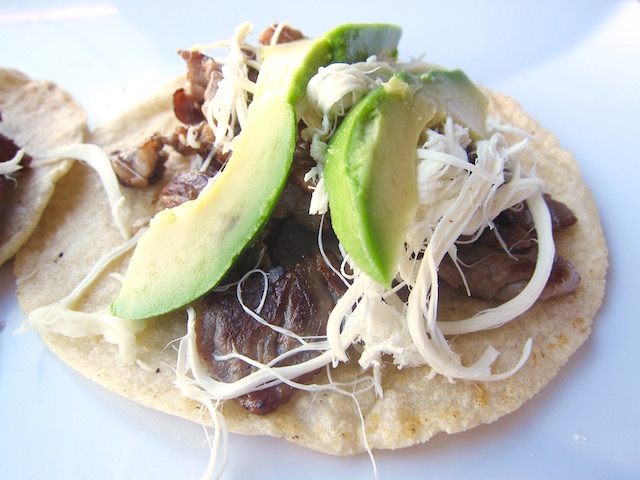 Their tacos have delicious Oaxacan-spiced meats that you might not find at your average taco spot, like tasajo (thinly sliced beef that's dried in sea salt) and cecina (pork marinated in chili powder). One of our favorites is the chicken mole, which has juicy chunks of chicken smothered in the thick mole sauce that has a perfect balance of chocolatey and savory flavors. There's also a veggie taco option, with a mix of bell peppers, onions and mushrooms. 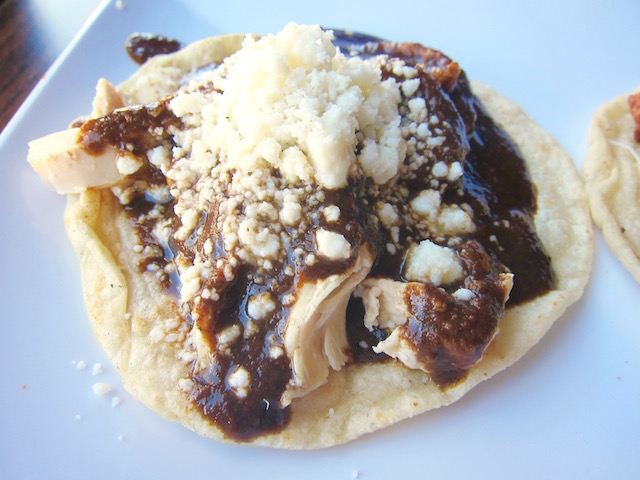 Many of the tacos are topped with slices of fresh avocado and a nice helping of shredded Oaxacan cheese. This cheese tastes like a saltier mozzarella, and has the texture of string cheese when you shred it. 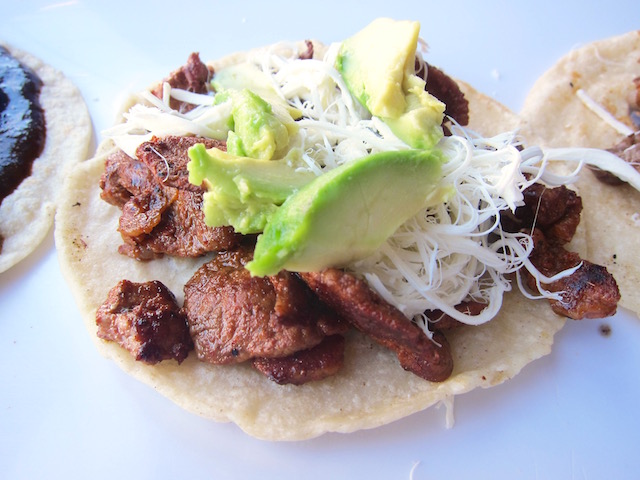 "[The Oaxacan cheese] is expensive and a lot of restaurants aren't as generous [as us] to put it on everything," owner Laura Guerrero tells LAist. She adds that some other restaurants will just cut the cheese, which starts off as a braided log, into slices. The bigger pieces come out super salty, and the fact that her restaurant shreds the cheese is a labor of love, since it's a strenuous process, she says. 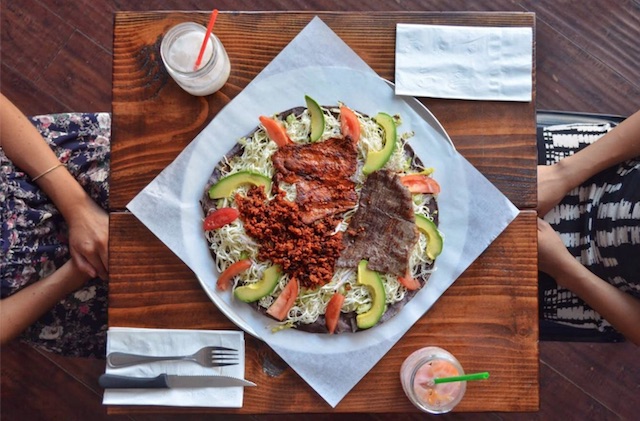 The tlayuda is like an Oaxacan pizza. This one comes with a trifecta of meats: cesina, tasajo and chorizo. (Photo courtesy of Tlayuda L.A.)

The restaurant takes its name after the tlayuda (pronounced tlah-yoo-dah), which is kind of like an Oaxacan pizza. They serve that, too. Theirs is a large toasted tortilla that has a thin spread of the black bean puree all over it, serving as the base sauce. It's topped with shredded lettuce, Oaxacan cheese, tomatoes, onions and avocado. Then comes the fun part: choosing the meat. While you can get single or double meat servings, we suggest going for the "supreme"—that's three kinds of meat—with tasajo, cesina and chorizo. You might as well go big or go home. The tasajo and cecina are arranged as large slices of meat on the tlayuda—don't expect the meat to be pre-cut into bite-size pieces. The tlayuda may seem plain at first, but drizzling the spicy salsas that accompany the dish add flavor to it. Cut it up and eat it like an open-faced pizza, or fold it in half like the New Yorkers do with pizza.

There's a vegetarian option of that, too. Guerrero says that since the dishes are made to order, they can easily take out non-vegan items like cheese per the customer's request.

Guerrero opened the restaurant with her family about 10 months ago. The restaurant they took over was already serving Oaxacan food, so they decided to follow in its tradition, but make it more contemporary. "Mexican food isn't so synonymous with healthy food," Guerrero says. "We wanted to change that and provide good food at affordable prices, and dishes that aren't very common in L.A." However, they also carry Mexican staples like burritos and tortas if you have a hankering for something more familiar.

Guerrero says that while there are a lot of Oaxacan restaurants in L.A., many of them aren't very inviting to the general public, unless you go to the very popular Gueleguetza in Koreatown. She's trying to make the food more accessible. Tlayuda L.A. has also meticulously tweaked the recipes from Oaxacan dishes in a way that they think would be more appealing to folks, like lightening up on the beans in some dishes. At the same time, they also try to make sure their cooks are either Oaxacan or trained by someone from Oaxaca, so they can keep with the traditional flavors.

If you're craving a heartier meal, they also offer larger classic Oaxacan plates. Guerrero says some of the must tries includes the carne encebollada—grilled meats with onions, rice, beans and tortillas—and the enchiladas, which you can get smothered in mole or green salsa.

Editor's Note: This story originally referred to the black bean puree as asiento. Asiento is actually unrefined pork lard. The story has been corrected.