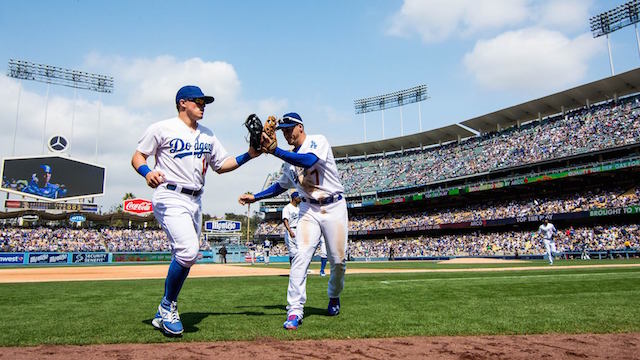 Bro did you hear, they caught the bat burglars! (Photo via Facebook)

Imagine you’re in a situation where a seemingly endless supply of marketable ‘collectible baseball memorabilia’ streams by your entrepreneurial eyes each day, likely headed for the dustbin after only one or two uses.

This is the situation Juan Prada and Fernando Sierra, a pair of long time Dodger Stadium security guards, found themselves in. Not seeing the harm, Prada and Sierra skimmed Dodger “memorabilia”—like bats, balls, jackets and gloves—from the stadium for more than a decade, and then resold the stolen items on eBay, according to TMZ.

All of this was uncovered after the team’s attorney, Chad Gunderson, was scrolling though the web and noticed items for sale on eBay that he knew shouldn’t have been there. Curious, Gunderson sent the offending account, Swinghard33, a message asking where they obtained the goods.

The seller replied clearly that he had “two very good sources at Dodger Stadium." For example, the seller said of a jersey worn by former team Manager Don Mattingly that “this jersey was pulled off the rack from Dodgers Stadium last week."

Gunderson pressed for more info. As the L.A. Times reports, Swinghard33 told him “My contact works at the stadium. [The items] were intercepted before making it down to the clubhouse.”

Gunderson decided it was high time to launch a quiet internal investigation. He set up secret cameras in the clubhouse and equipment room, and ordered the automatic light switches disabled.

What the cameras revealed after a few days were two masked men—incidentally wearing security guard apparel—paying a 3 a.m. visit to the Dodgers clubhouse. They left with bats, shoes, jackets, hats, and a box of balls.

Sierra, Prada, and the eBay seller, Jesse Dagnesses, were arrested a few weeks later by the Los Angeles Police Department, booked on suspicion of burglary and later charged with conspiracy to commit a crime. They have pled not guilty.