It may just only be the soft opening of actor Danny Trejo's new taco shop, but it's already creating a stir, with long lines circling around the Mid-Wilshire restaurant even way past lunchtime.

We can see why there's buzz; while we've seen Trejo swing machetes and wield machine guns on the screen, we hadn't seen him dish out tacos until now. And his Trejo's Tacos caters very much to the people of this city—from the taco and burrito lovers, to the organic-conscious, Kombucha-sipping crowd.

When you walk up to Trejo's Tacos, the large, shaded patio makes way to a large piece of artwork hanging on the eatery's outdoor wall, showing Trejo donning a blue apron and holding butcher knives across his chest. The piece is made by local Boyle Heights street artist Ernesto Yerena, who has also created other artwork that adorns the walls here, like a colorful calaca skull. Inside is a smaller space with simple, pale yellow and green striped walls, and behind the counter is a wall of white subway tiles. Trejo is everywhere, with the actor's face emblazoned across the Trejo's Tacos logo, on the backs of employees' shirts, and on clothing and bags of coffee you can buy both inside and outside the restaurant.

As for the food, Trejo tells LAist that it's important to him that his restaurant uses the best ingredients. Nearly everything is handmade. "Our tacos at Trejo's Tacos are all organic—everything is fresh. Nothing stays in the restaurant overnight. At the end of the day, we donate everything. It's a labor of love." 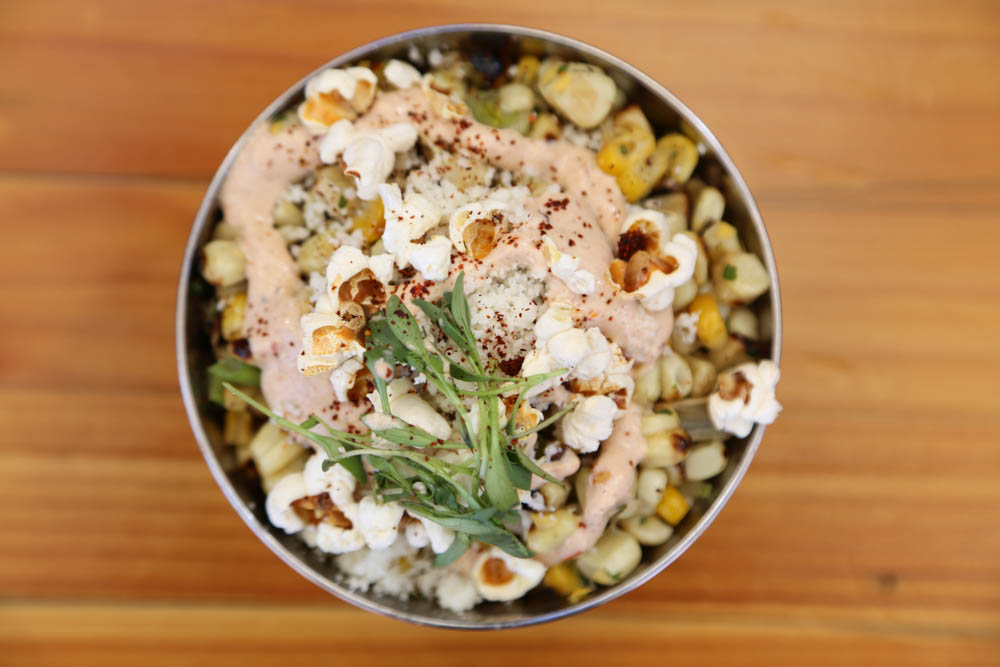 The organic street corn at Trejo's Tacos has the addition of popcorn in it. (Photo by Eugene Lee/LAist)

And while you can get your regular taco shop staples like carne asada and chips and salsa, a lot of dishes at this restaurant are amped up to be a little more gourmet. The guacamole is freshly made every day and topped with roasted pistachio nuts and slices of serrano peppers. The cheesy bean dip is made with heirloom beans straight from Rancho Gordo in Northern California. Their street corn uses a mix of white and yellow roasted organic corn off the cob, with a chipotle cream, cotija cheese, slices of green onions and a few kernels of popcorn. This version's lighter and healthier than your average street corn, and actually highlights the sweet flavors of the fresh corn. And of course, you can even get it vegan if you want.

There's a reason behind why Trejo's Tacos is catering to the vegan-vegetarian crowd (non-carnivores can opt to even get a black pepper tofu taco option). "I live in Los Angeles, and when you have more than five people going out to dinner together, inevitably somebody will be gluten-free or vegan," Trejo says. "So we made the restaurant vegan friendly, and we have gluten-free food. We wanted to take care of everybody."

But that doesn't mean there aren't meat options, which actually make up most of the taco menu. A new item that launched yesterday is the steak asada taco, which is by far our favorite of the lot. The chunks of steak are well-marinated and grilled, coming out moist with a bite that has a perfect chewiness to it. It's accompanied by a pepito pesto sauce and shredded cabbage on a fresh corn tortilla. 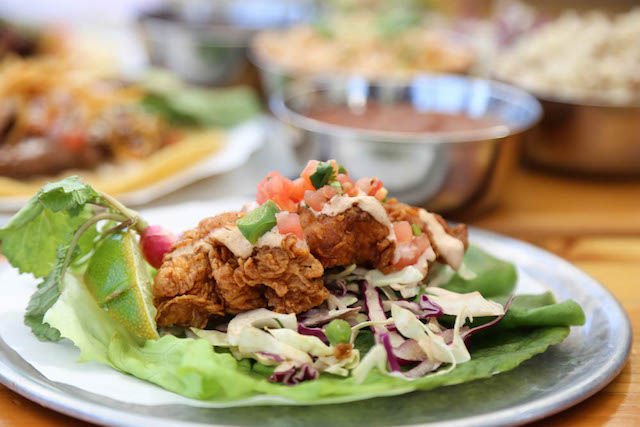 Another winner is the fried Jidori chicken lettuce wrap, accompanied by chipotle cream and a spicy slaw. The chunks of chicken are crispy on the outside and juicy on the inside. Having the chicken wrapped in lettuce instead of a tortilla actually makes it a lighter combo, and you might feel just a bit less guilty about eating fried chicken.

However, slightly underwhelming is the beef brisket. Even though it's topped with pico de gallo, the salsa isn't enough to pull up the meat, which isn't seasoned as much as we wish it would be. Though, it does have a fun texture of crunchy, thin slices of tortilla chips in the taco.

One thing we have to give credit to Trejo's Tacos for is that they don't shy away from the heat. Their slow roasted pork shoulder taco is topped with a fermented and house-made red chili hot sauce with Manzano peppers that might make you sweat a bit. They have house salsa bottles on the tables, bearing Trejo's mug on the label. The sauce is made with seven different kinds of chili peppers. Treat it like you would Tapatio. 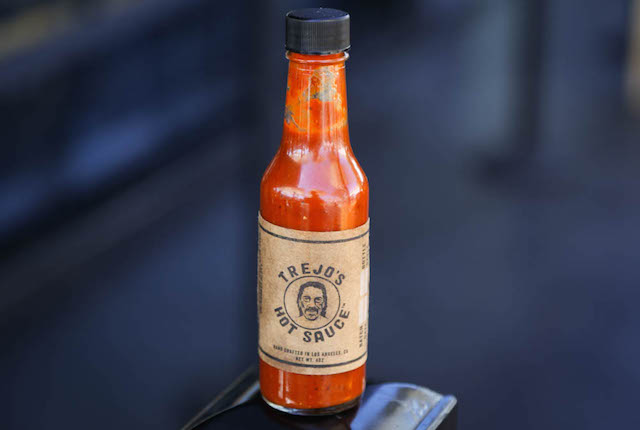 The recipes for the salsas are partly inspired by Trejo's mother's salsas. She was part of the reason Trejo was inspired to open the restaurant. "Having a restaurant was always my mom's dream," he says. "She was a great cook. But my mom came from the era where the man worked and the woman stayed at home. She used to make the best tacos in town and her salsa was amazing. She could make it mild, medium, hot and go-to-hell. So this is to honor her memory."

Trejo says he doesn't cook as much as he used to now that his kids are all grown up, but he does throw down some mean migas. The restaurant's menu was instead created by Daniel Mattern (Cook's County), and Corporate Chef Ramses Walker put some finishing touches on the dishes. Walker describes their food as "farm-to-table" and "seasonal."

Right now, Trejo's Tacos is serving a limited menu during its soft opening. As the weeks go on towards their grand opening (which doesn't have a set date yet), more dishes will roll out, like a Baja fish taco, an Austin-style fried avocado taco, and another vegan taco with roasted cauliflower and corn. Expect salads and burritos to join the menu as well.

Trejo co-owns the restaurant with his partners Ash Shah and Jeff Georgino. Shah produced the Bad Ass film franchise, in which Trejo starred. When the two would work on set together, Trejo says they "always ate well and talked about great food." When he mentioned to Shah that everyone was telling him that he should open a restaurant, and that if he did, he would call it "Trejo's Tacos," Shah joined forces with Trejo to make the dream come true. 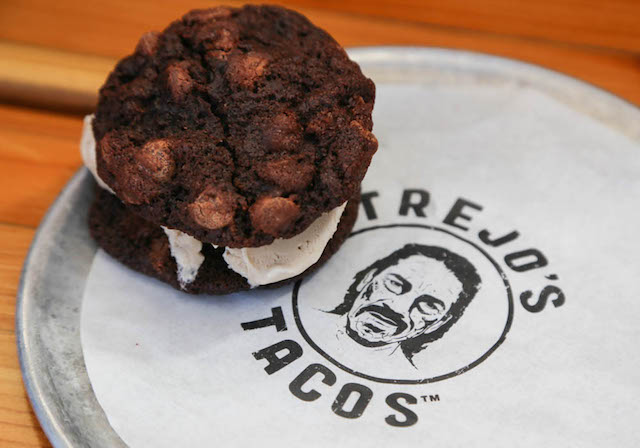 There's also a very local and Californian connection to the restaurant. Trejo's Tacos offers one dessert, an ice cream sandwich made with McConnell's churros con leche ice cream—specially made for the restaurant—and sandwiched between two soft and chewy Mexican chocolate chip cookies from local Cookie Casa. Trejo even has his own special blend of coffee beans roasted by Pasadena's Zona Rosa, who also makes the restaurant's cold brew on nitro. The rotating beer they have on tap comes from local breweries, and there's a "Trejo's Cerveca" Mexican-style craft lager brewed in the Arts District.

Even their house-made horchata is made with toasted white rice coming out of Lundberg farms in Northern California and almond milk, then sweetened with dates and topped with cinnamon. While you might be used to very sweet horchata from taco shops, Trejo's Tacos' version is lighter and not so sugary. You might be wishing it were a bit sweeter, like most horchatas you're used to. You'll also find house-made watermelon and pineapple frescas.

Expect a Trejo's Tacos expansion in the coming months. They'll be opening a new Hollywood location, which Trejo says should open in May. It'll have a bar menu, 30 beers and wines on tap, and will stay open much later than their current location. "We plan on tailoring our restaurants to fit whatever neighborhood that they are in," Trejo says. "We don't want cookie cutter places that feel out of place with their surroundings."

And if you want to check out the Mid-Wilshire location at this very moment from the comfort of your own home, you can share a moment with Trejo by eating tacos with him (virtually) through a 3D 360 VR video: