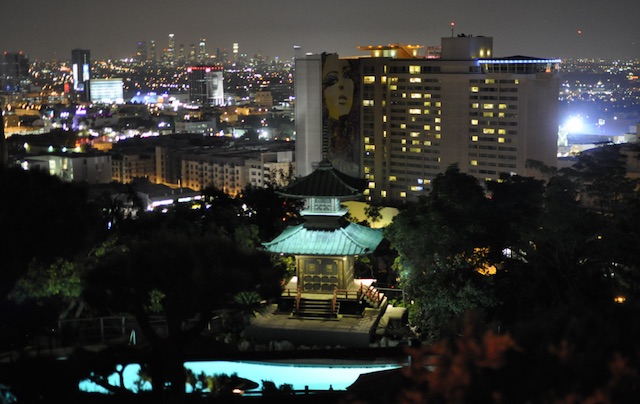 The view (Photo by a.rios via the LAist Featured Photos pool on Flickr)

The beautiful Yamashiro restaurant with its sweeping views has been sold, but luckily not to anyone who wants to shut it down.

The property that contains Yamashiro—one of our favorite classic L.A. restaurants—has been sold to JE Group, a hotel operator based in Beijing, for about $40 million, the L.A. Times reports.

Fortunately, JE chairman Kang Jianyi has stated that the only changes that will be made to the property will be updates to the buildings. These renovations will be made to Yamashiro as well as a few other structures on the seven-acre property. The Hollywood Hills Hotel and Apartments and Yamashiro will both be kept open, and there are no plans for any new construction on the site. However, there may be a new restaurant operator coming to Yamashiro.

JE owns seven hotels in China and is looking to expand into several major U.S. cities.

Other interested parties in the sale had previously included an Italian group that wanted to turn the property into a private club, and a tech company that was looking at turning the site into a think tank.

Yamashiro, which means “mountain palace” in Japanese, was built in 1914 and is located 250 feet above Hollywood Boulevard, according to its website. It wasn't a restaurant then, but an estate built for brothers Charles and Adolph Bernheimer, who were hoping to replicate a palace they had seen near Kyoto. In the 1920s, Yamashiro was frequented by Hollywood celebrities, and in 1948, it was purchased by Thomas O. Glover, according to KCET. Glover had originally imagined tearing the whole thing down and turning it into a hotel and apartments, but found himself taken with the home and restored it instead. Over the years, Yamashiro turned into the restaurant we know and love today.