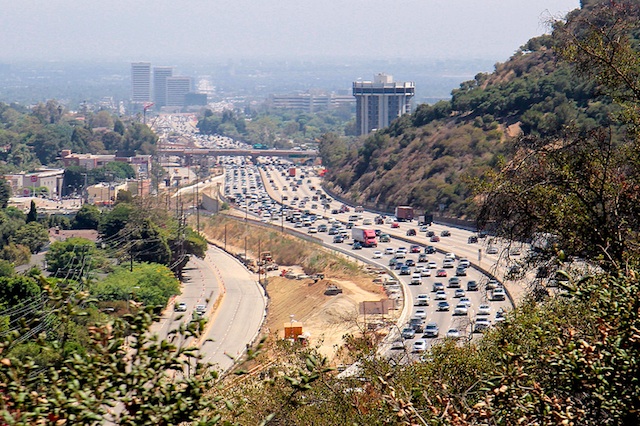 The Sepulveda Pass. (Photo by Karol Frank via Flickr)
Metro plans to unveil a list of projects it hopes to take on if a $120 billion ballot measure makes its way through in November, according to the Los Angeles Times.

The project list, obtained by the Times, touches nearly every corner of the county, east to west and north to south, with five new transit lines and six extensions of lines already in place.

The stand-out star on the list is a tunnel through the Sepulveda Pass, an option for those trying to escape notoriously awful 405 traffic. The tunnel could have a toll freeway and connected the Purple and Expo Lines with the Orange Line bus in the Valley. Of course such a hefty project could cost up to $10 billion, the Times said.

Sounds like they took inspiration from a nutty proposal from a few months back.

The Valley, long feeling neglected by public transportation, could up its transit game with either a light-rail or bus line along Van Nuys Boulevard, connecting the Orange Line bus with the Sylmar Metrolink station.

Other highlights on the wishlist (which Metro says isn't final yet):

The large-scale vision would connect wide swathes of the county but would likely have to answer to opponents of pouring more money in to the system, which has seen ridership drop 10 percent in the last decade.

"There's been a tremendous amount of work that went into this, keeping in mind that this is a regional system for everyone in the county," Metro spokeswoman Pauletta Tonilas told the Times. "What we've been saying is, everyone is going to get something, and no one is going to get everything."

The measure would hold onto a current half-cent sales tax, Measure R (approved in 2008), for more than 20 years and raise the county's sales tax rate by another half-cent for 40 years or more. Measure R helped the agency fund the extension of the Gold Line to Azusa and the Expo Line to Santa Monica. The agency's board of directors will decide in June whether to put the measure on the ballot in the fall.

It would take two-thirds majority approval for the measure to get through and would increase the county's base sales tax rate to 9.5 percent, the Times reported.