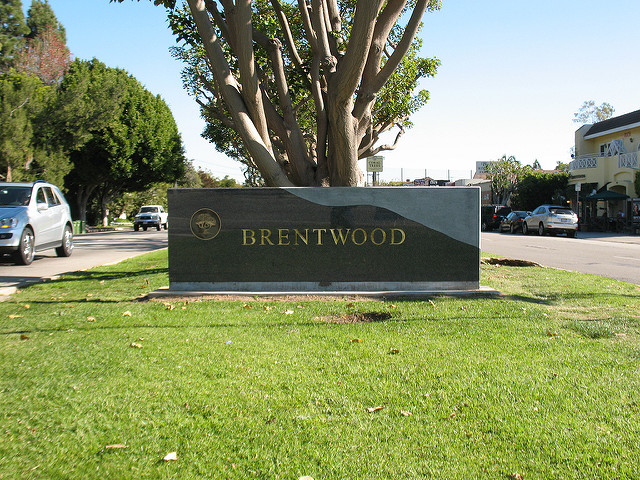 Welcome to Brentwood, folks. (Photo by Jorizaga via the Creative Commons on Flickr)
Neighbors of Brentwood's Sullivan Canyon aren't happy about a housing developer's removal of trees that were meant to be preserved—and they want him to pay for it, according to the Los Angeles Times.

The city gave real estate developer Sam Shakib permission to take out 56 trees in the canyon's hillsides for a development of two roughly 15,000 square-foot homes, the Times reports. But when his crews showed up, they took more than they should have, removing a sycamore and two oaks marked for preservation.

The neighbors want the developer to get more than a slap on the wrist for the mishap. They want the city to revoke his permits for the two estate-sized homes. The city of L.A. can halt construction for up to 10 years if they find developers violated rules regarding tree removal. According to opponents of the project, the trees were part of a pristine hillside rich with wildlife.

Staffers expect the city to make up its mind next week, the Times said. To figure out whether to enforce it, they'll look at the trees that were wrongly removed—their size and age—and whether the owner took them out on purpose.

Shakib's attorney Patrick Mitchell told the Times that it wasn't done intentionally. "There's no upside," for cutting the trees, he said. Shakib and his partner Sean Namvar offered to replant 14 trees but apparently the neighborhood isn't interested.

Sara Nichols, who lives near the site, argues taking out a sycamore tree was done purposefully to make way for a retaining wall in a driveway. "It was very deliberate," she said, according to the Times. "To willfully cut a tree like that, that gorgeous specimen... is a criminal act."