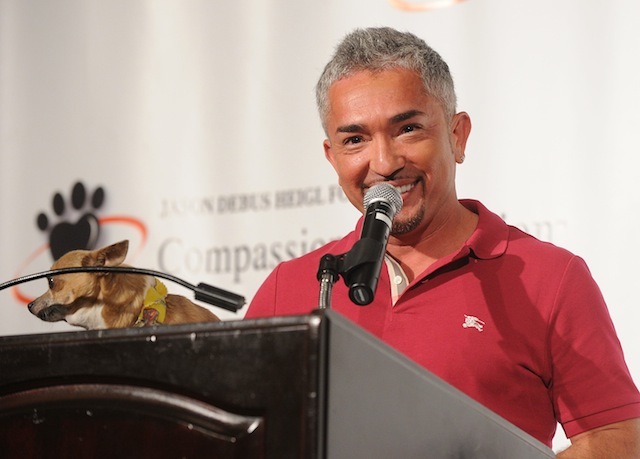 ‘Dog Whisperer’ Cesar Milan (Photo by Jason Merritt via Getty)
"Dog Whisperer" Cesar Millan is facing complaints of animal cruelty after a dog bit a pig on an episode of his show Cesar 911, according to NBC 4.

The February 26 episode shows Millan using a pig to help train a bulldog-terrier mix named Simon that had attacked pigs in the past, the Los Angeles Times reports. The dog ends up biting the pig's ear, drawing blood. People upset about the incident have posted online that they believe that the ear was actually bitten clear off, but the show's staff tells NBC 4 that's not what happened.

Nat Geo WILD officials have released the following clip of the episode in question "to provide missing context" and to show Millan "created a safe and controlled environment" at his facility:

"The pig that was nipped by Simon (the dog) was tended to immediately afterward, healed quickly and showed no lasting signs of distress," show officials said in a statement, according to People.

The incident reportedly happened at the Dog Psychology Center, a training facility Millan has in Santa Clarita. Los Angeles County Animal Control told NBC 4 the agency issued a 24-hour notice for Millan to contact the department, so that they can ask questions about the pig in the episode. Los Angeles County Sheriff's deputies and animal control officers went to the facility Thursday night but he wasn't there, the L.A. Times reports.

"Cesar Millan is and will continue to fully cooperate with authorities in any investigation...He is confident that the investigation will show there was no wrongdoing," the statement by show officials continued.

Millan is known for his books, seminars and TV shows, including Dog Whisperer with Cesar Millan, Leader of the Pack and Cesar 911, all focused on dog training. The center's website says he learned his affect on dogs while being a dog groomer shortly after moving to California from Mexico. He later trained dogs on a freelance basis and then opened his center in Santa Clarita, it says.