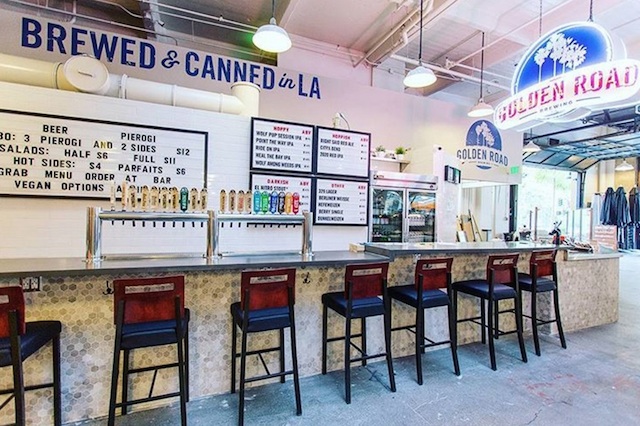 If you have a hankering for a cold beer and a hot pierogi, a just-opened counter at Grand Central Market is your newest destination.

In a sudden debut, Golden Road Brewery has just opened their long-awaited beer and food counter in the bustling and rapidly evolving downtown marketplace. According to Eater LA, the new spot started selling an extensive lineup of beers, including their popular IPAs, alongside meat-filled and vegan pierogi as of 2 p.m. today.

The beer selection ranges from the tart and bright Berliner Weisse to the hearty and spicy Back Home Stout, with plenty of variety in between from the local brewery recently acquired by beer giant AB InBev. Some of the Polish dumpling options include al pastor, bacon cheddar and duck confit, as well as wild mushroom and soyrizo, which can be loaded up with non-vegan or vegan toppings like roasted tomatillo sauce, sauerkraut, queso fresco or bacon. They'll also be offering hot sides like roasted cauliflower and Brussels sprouts, along with cold salads like curried quinoa and cherry tomato caprese. They also have non-alcoholic options as well.

While the official hours for the bright and airy, stool-lined counter haven't been announced, it looks like you can count on lunch service with a good chance of expanding into evening hours, according to Eater LA.