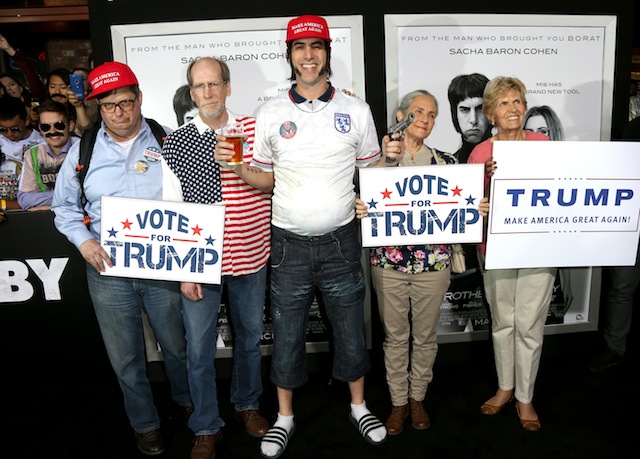 Sacha Baron Cohen, at the premiere of 'The Brothers Grimsby' in Westwood Village. (Photo by Frederick M. Brown/Getty Images)

Actor Sacha Baron Cohen arrived to the U.S. premiere of his latest film, The Brothers Grimsby, and was eager to promote "Donald Julio Trump" for president of the United States, according to the Hollywood Reporter.

The film is about a passionate English footballer's quest to find his long-lost brother, who is now an MI6 spy. Cohen showed up to the Regency Village Theatre in Westwood on Thursday as Nobby, wearing Trump's signature "Make America Great Again" red cap and a pin of the 2016 republican presidential candidate. Then he took to a podium where he praised "Donald Julio Trump."

"Initially I was going to endorse that crazy, liberal socialist, Ted Cruz," Cohen said as Nobby, according to the mag. "But it was Donald's rallies that won me over. It's like football matches in England: shouting, violence, abuse...I'm swearing allegiance to Trump. He is a fantastic bloke. And the great thing that history has shown is, getting a demagogue who speaks at rallies ...never leads to anything bad. It always works out."

It's not the first time we've heard Trump's name with the film, which is out on March 11. There's a subplot in the film where Harry Potter star Daniel Radcliffe, played by a another actor, gets HIV and eventually gives it to Trump, the U.K.'s Telegraph reports. A disclaimer at the end of the movie says neither were in the movie or have the disease, according to the Hollywood Reporter.

The film isn't out in the U.S. for a few days but apparently the Trump storyline is a hit in the U.K., getting loud cheers from the crowd, the Telegraph says.

The two stars have also had a run-in in the past.

In a 2003 episode of Da Ali G Show, Cohen as the titular character pitched his "ice cream gloves" idea to Trump. Trump walked out on the interview:

Trump later bragged about the incident:

I never fall for scams. I am the only person who immediately walked out of my ‘Ali G’ interview

He also said that Cohen deserved a beating after a stunt on Oscars red carpet in 2012:

@SachaBaronCohen is a moron who should have been pummeled by the weak and pathetic security person who stood (cont) http://t.co/XAYYf7I3

In December, Cohen, as Borat, went on Jimmy Kimmel Live! and said that Trump was clearly one of Cohen's "very, very offensive" characters. "The only person who would ban Muslims is someone with a brain like a female chicken," said Borat. "It is clearly a parody of a rich American racist... He do not even look real!" You can hear the bit in the video below, starting at 2:25