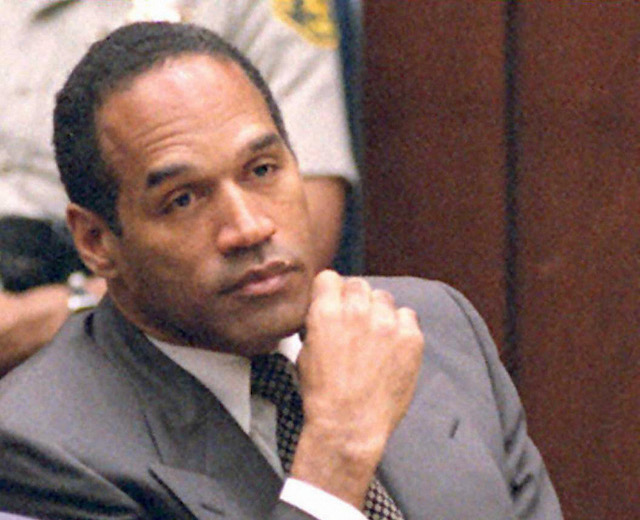 O.J. Simpson listens to testimony during the trial for the murders of Nicole Brown Simpson and Ron Goldman. (Photo by Dan Mircobich/AFP/Getty Images)

The Los Angeles Police Department is now looking into a knife that was reportedly found on the former property of O.J. Simpson, according to TMZ.

It's been more than two decades since the trial that had the nation glued to its television screens—when the former football star nicknamed "Juice" would be acquitted of the fatal stabbing his ex-wife, Nicole Brown Simpson and her friend Ronald Goldman. It's again capturing audiences in the new star-studded FX show, The People v. O.J. Simpson: American Crime Story.

The knife used in the stabbing was a key piece of evidence that police never locked down, said the L.A. Times.

The knife that detectives are looking at, a folding buck knife, was in an officer's possession, TMZ says. It was handed over by a construction worker that worked on the razing of the Brentwood estate to an off-duty police officer, according to TMZ. He found it buried on the perimeter of the property, the site says.

But the officer apparently kept the knife to himself for years. Up until recently.

At the end of January, the officer (now retired) called up a friend who worked in the robbery homicide division and asked for the departmental record number for Nicole Brown and Ronald Goldman murder—you know, so he could engrave it on the frame. He was going to mount the souvenir on his wall, TMZ says. The friend told his superiors and they demanded that the former officer turn over the knife and he did.

During a press conference on Friday morning, LAPD said it's unclear if the officer, who retired in the late '90s, was already retired from the department when the incident happened. Apparently he was working an off-duty job for a movie at the time.

The story of how the knife was found needs to be vetted by the department, Capt. Andrew Neiman said in the presser.

It will be processed like regular evidence, such as for hair and DNA, officials said.

Since Simpson was found not guilty, the case isn't closed, but he can't be prosecuted again because of double jeopardy said officials.

"It's my understanding that double jeopardy would be in place here," Neiman said in the presser. "We could not charge Mr. Simpson with the homicide charges because he's already been acquitted."

Simpson is currently serving time in a Reno prison for 12 counts, including felony kidnapping and armed robbery, according to the Las Vegas Sun. He's up for parole in 2017, according to ABC News.