If the earth laughs in flowers, as Ralph Waldo Emerson wrote, the epic blooms that carpet Death and Antelope Valleys must be the uncontrollable kind. But laughter comes in many forms—snickers, chuckles, shrieks, giggles, roars, snorts—and such mirth is found all over California's landscape, from its ocean vistas to desert fields, its rolling hills to farm fields. The following wildflower spots all put on playfully humorous routines throughout Southern California, but this lineup's schedule is at the whim of Mother Nature's comedic timing. Use the guide below to plan ahead. Enjoy your Golden State.

Note: As of March 23, 2016, bloom reports indicate really good conditions at Figueroa Mountain (and nearby Grass Mountain) and a very promising start at Carrizo Plain. The giant coreopsis blooms at Point Dume and Anacapa Island are still there but appear to be past peak and fading. There are reports of nice blooms to be found at Anza-Borrego and Carlsbad Ranch remains open through May 8. While Wind Wolves appears to not be blooming, nearby Tejon Ranch and surrounding area are receiving great reports. Tours of the private ranch can be booked here. 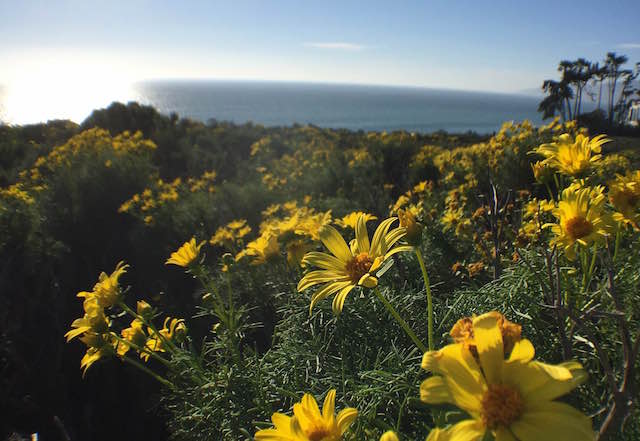 Above the sand and waves at Malibu's Point Dume State Beach sits its headlands with sweeping views up and down the coast. An important site to Chumash Indians and later the military during World War II, the tip of this promontory is now a small state preserve. During the spring, it can be lush with yellow giant coreopsis just like Anacapa Island (which can be seen across the Santa Barbara Channel). Take in those island views, but don't forget to look down: this is a popular spot for gray whales to stop by during migration.

Wildflowers in La Jolla Valley in spring 2015. (Photo by nthechang/Instagram)

While their proximity to L.A. helps attract throngs of hikers to Topanga and Malibu Creek state parks, Point Mugu's 15,000 acres on the western end of the Santa Monica Mountains remains quieter. It's an expansive park with some 70 miles of trails taking you through river canyons, grassy valleys, and up the backside of the extraordinary Boney Mountain. It's also home to the only designated wilderness area and backcountry campsites in the range. And it's those sites in La Jolla Valley where some great wildflower spreads can occur—pending good rains, of course. Even without the flowers, looking down upon La Jolla (and nearby Serrano Valley) as you hike down is an amazing site. It's a peek at what Southern California looked like before massive development. 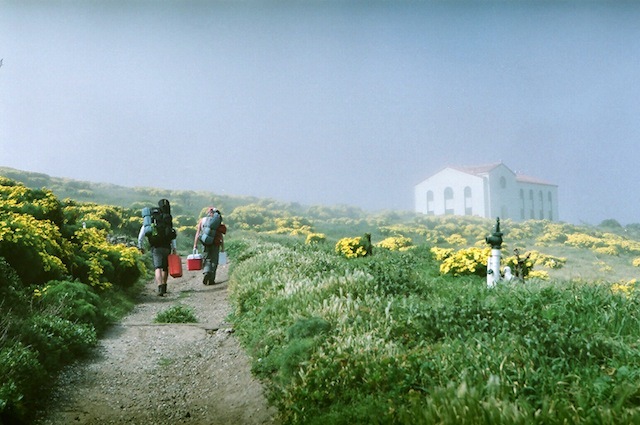 On a foggy day, campers head to the island's campsite through a field of flowers. (Photo by Shawn Nee/discarted)

The Channel Islands all put on great shows and, like most spots on this list, are worth visiting any time (you can travel to six of the eight islands). They are, however, harder to visit on a whim, namely due to the logistics of boat transit. One of the easier islands to get to and immediately see carpets of wildflowers is Anacapa in Channel Islands National Park. Anacapa Island is the second smallest island in the archipelago, but it's distinct profile—with its flat eastern end and towering western one (giving an awesome view like this)—makes it is easy to spot from the shores between Malibu and Santa Barbara. It hosts a variety of species that accent the big yellow showing of giant coreopsis, which can creep up in late winter or early spring. Anacapa is also a fantastic spot for sea cave kayaking. Boat transit is found via Island Packers in Oxnard and Ventura. 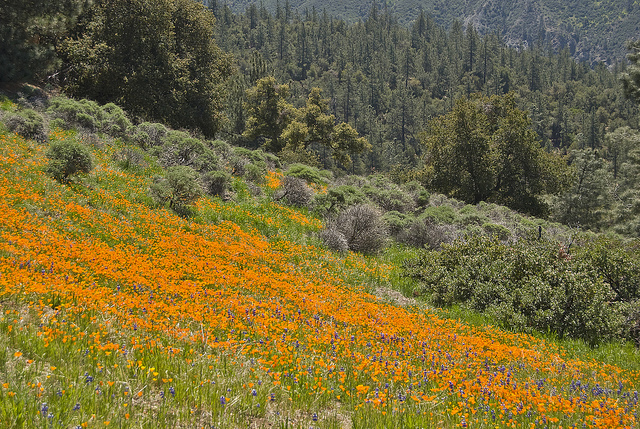 On a good year, Figueroa Mountain in Los Padres National Forest is like Antelope Valley's poppy reserve, but in a pine forest on hillside slopes. When peaking, it's quite a thrilling sight. It doesn't hurt that you're at the edge of Santa Barbara's wine country either. Make a nice long wildflower loop by leaving Los Olivos on Figueroa Mountain Road, passing by Michael Jackson's former Neverland Ranch, hitting up the awe-inspiring, carpeted slopes of Figueroa Mountain, and enjoying a diversity of wildflowers in smaller pockets as you continue to and then turn southward on Happy Canyon, driving through a pleasant countryside scene (and the multimillion dollar homes that dot landscape) before the road spits you back into the Santa Ynez Valley. If you want expert advice on where to see just about everything, Ranger Helen Tarbet leads an annual wildflower auto tour, which is announced on the Forest Service's website. I joined her several years ago and she brought us to a number of easy-to-miss special spots, including one where we saw numerous pagoda-like wildflowers known as Chinese houses. 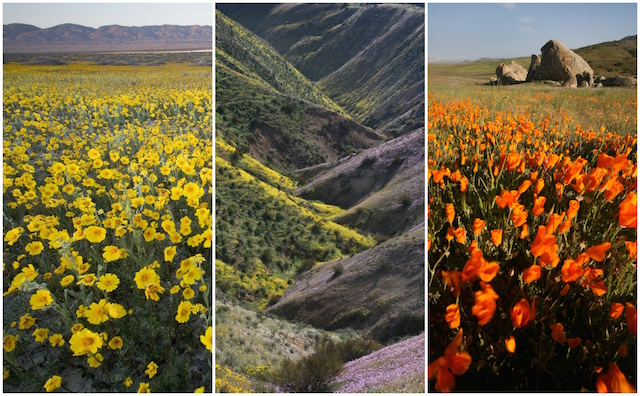 The wildflowers in abundance here don't make an appearance that often, but when they do, it's a true riot. And if it's happening, get ready for a road trip to one of those far flung places where the silence can feel deafening and the scars of the San Andreas Fault can be seen. Carrizo Plain National Monument sits on the border of Kern and San Luis Obispo Counties in California Valley, where dreams of development dried away thanks to the lack of water infrastructure. Civilization can feel far: there are no restaurants or gas stations here. Hopefully doesn't sound like a deterrent. Isolation is part of the draw and on a good wildflower year, none of that will matter anyway. If you're staying, there's one motel and camping available. 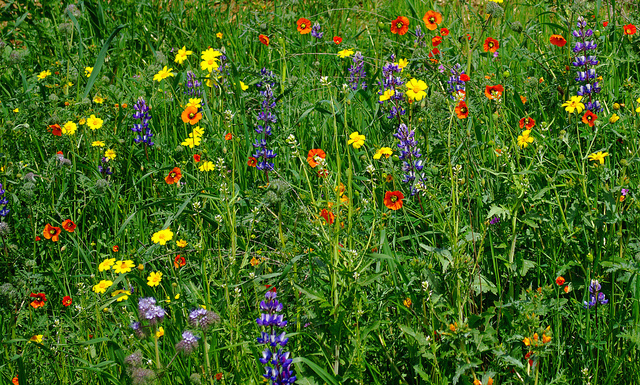 A nice bouquet of color at Wind Wolves Preserve. (Photo by Tom Hilton via Flickr)

Wildflowers in bloom or not, this is one of my favorite canyon hikes. Wind Wolves Preserve in Kern County is private open space operated by the Wildlands Conservancy, the group behind the massive lands donation that helped enable President Obama to establish Mojave Trails National Monument. The 95,000-acre preserve's main topographic feature is the wide San Emigdio Canyon (it's stunning), which can lead you some 6,000 feet up into eastern reaches of Los Padres National Forest. This is a great spot for camping and wildlife viewing. On a sunrise hike once, I saw my very first bobcat in the wild. There are also tule elk, kit foxes, and, if you're really lucky, mountain lions and bears. As for wildflowers, a good year can beget quite the bouquet: look out for monolopia, red maids, bloodroots, purple phacelia, blue-eyed gilia, wild hyacinth, grape sode lupine, and, of course, poppies. 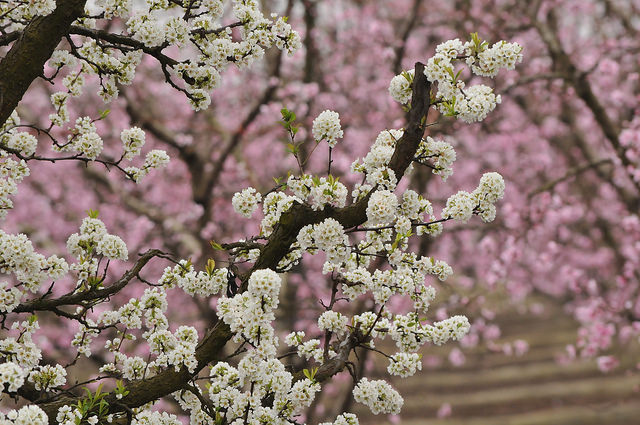 Okay, these are not officially wildflowers, so consider this a bonus. Every year, the farm fields of the Central Valley is ablossom, thanks to almond, citrus, apple, plum, peach, apricot, and nectarine trees. Why wouldn't the Fresno area capitalize on such a sight? Unlike other spots on this list, though, "trail" here doesn't mean hiking. Rather, it's a route great for biking or driving. In a way, it acts as a good appetizer for what's to come nearby in the Sierra Foothills. 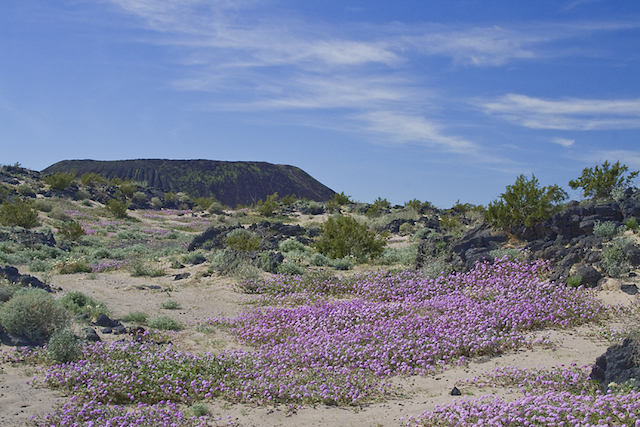 A patch of sand verbana near Amboy Crater. (Photo by Gregory "Slobirdr" Smith via Flickr)

There are probably dozens of amazing wildflower sites in the newly anointed Mojave Trails National Monument, but without such designation, the area has not gotten much attention in terms of tourism. That will likely change over the years. For now, Amboy Crater off Route 66 has been a traditional good spot for wildflowers. A three-mile round-trip hike from the trailhead will take you in and out of the crater. If it's a great wildflower year, you'll definitely get your kicks. And since you're near Mojave National Preserve, there are some great spots to explore to round out the trip, including Kelso Dunes, the lava tubes, and an awesome Joshua tree forest hike to the top of Teutonia Peak. 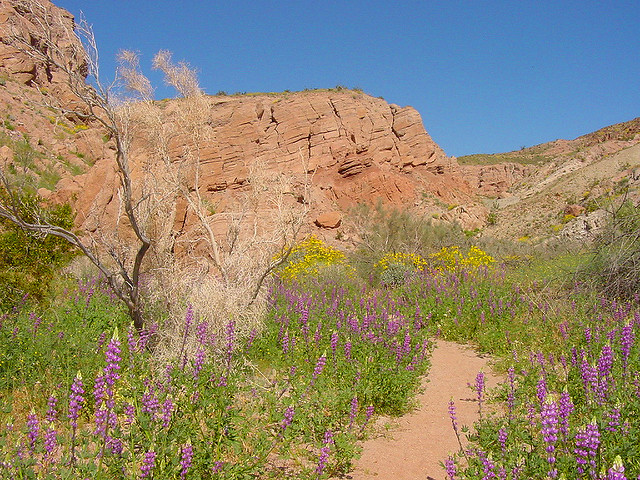 As a national park, Death Valley lays claim to a lot of cool stuff: it's one of the largest national parks, it has certifiable dark skies, and, as we all should know by now, amazing wildflower blooms. On the flip side of California's desert is an unsung hero of great desert parks: Anza-Borrego Dsert State Park. Like Death Valley, there are some parallels: Anza is our largest state park, its one community, Borrego Springs, is certifiably dark for nighttime viewing, and, yes, the wildflower blooms can be terrific. Valley-wide blooms can happen, but don't forget to enjoy how flowers dot the desert, accentuating earthy tones. One bloom in particular is especially unique to this park: ocotillo. Sometimes referred to as candlewood or a flaming sword, this low desert plant blooms red at the tips of its tall canes, some which can grow up to 20 feet. 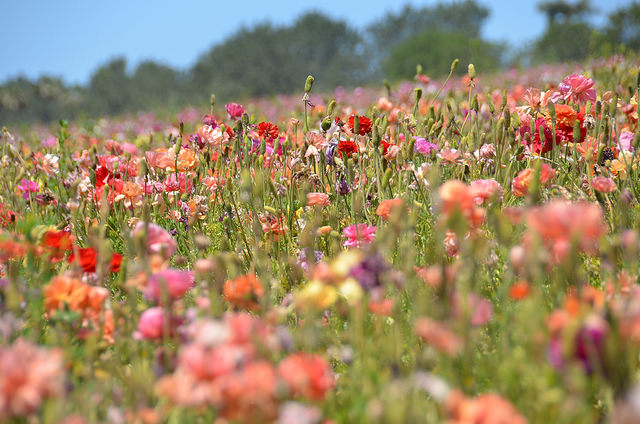 Again, cheating here. Consider this your second and last bonus. The rows of colorful giant tecolote ranunculus are not wildflowers, but for 85 years, the Carlsbad Ranch opens its gates and lets the public soak up its flower fields—for a cost. It's quite the spectacle.