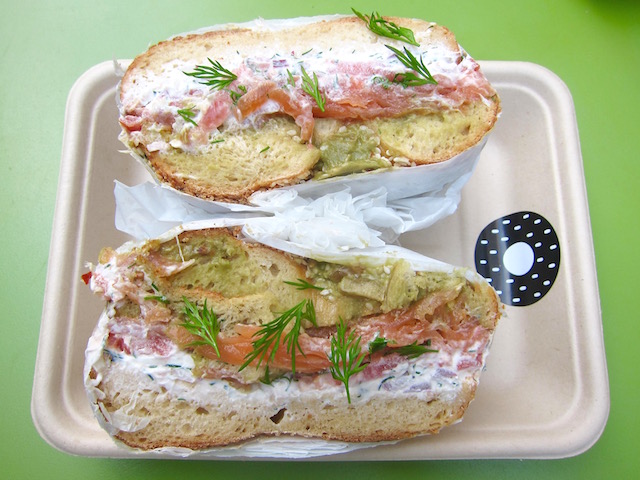 For the last couple of years, Yeastie Boys have been helping you fight for your right...for a fine, hand-rolled bagel. Now, the self-proclaimed #BAGELLORDS food truck purveyors have a space in a brick-and-mortar shop to call home now, along with some new, gourmet bagel sandwich creations.

Yeastie Boys now shares space with the Alfred Coffee {In The Alley} coffee shop in West Hollywood. When I was recently invited to check out the shop for breakfast, there was a crew working to install a pink neon Yeastie Boys sign in the window, further cementing their presence. It's situated in an alley next to a Cycle House, and the cyclists often make their way over to the coffee shop after a workout. Yeastie Boys owner Evan Fox, who lived in New York for two years, says many of the carb-conscious folks get their bagels scooped, which he feels is "pretty sacrilegious," but they'll do it anyway for the clientele. 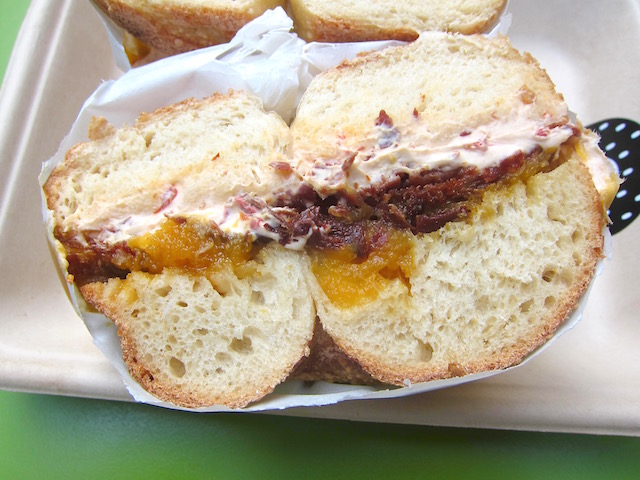 The difference between this brick-and-mortar location versus Yeastie Boys' food truck is that the bagel sandwiches here are for a "sophisticated palate," Fox says. And indeed they are. While you may be able to get beer cheese and jalapeno spread on a cheddar bagel at the truck, at this WeHo spot, you'll find sandwiches like the "#3," which is made with a maple-roasted butternut squash that they puree, house-made honey chipotle cream cheese and crispy prosciutto, sandwiched between hand-rolled plain bagel slices. This one is by far my favorite of the breakfast sandwiches—it's a sweet and savory bagel concoction with a nice crunch from the bits of prosciutto, and different than anything else you can get in town.

Fox recruited baker Codii Lopez (formerly of Milo & Olive and now a sous chef at Maple Block Meat Co.) to help create the menu for this location. The recipe and process for making the bagels has changed over the last few months since they first started slinging them. The bagels are still hand-rolled, but they're a lot thinner now. "I think what happened were the bagels were too plump," Fox says. "And that was my thing—I wanted that shit to be loud and crazy, but I think over time, [customers] can't even eat the sandwich [because] it's so fucking big."

He says it's all about the technique when it comes to making bagels (though he also notes that they don't add preservatives and use malt sugar instead of regular sugar). It's a process that takes two days, where they hand-roll the dough, proof it overnight in a walk-in fridge (where the dough rises over time), and then boil and bake them in the morning. "The hand-rolling is huge," Fox says. "There are these flavor pockets...when you hand-roll the bagels, you can cut the bagel open and see these little holes inside and then you're like, 'Yes, that's the hand-roll.'"

And whenever it comes to New York versus L.A. bagels (or pizza), the water added in the dough is always a point of contention. Fox says New York water is "100 percent better" than L.A.'s, mostly because of the Catskill Mountains that make the water cleaner, fresher and a lot softer. He believes L.A. water is hard and just plain horrible, but he's learned ways to work around it.

The bagels are indeed chewy, moist and plump, and you'll never find a day-old bagel because Fox says he throws out any of them that they don't sell by the end of the day. 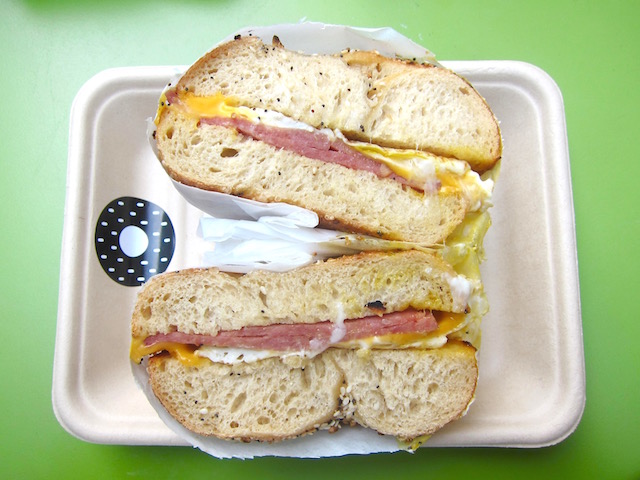 Some of the other other breakfast sandwiches you can find on their new menu include an homage to New Jersey, the "#1." It's a simple one served on an everything bagel, and made with Taylor Ham (aka pork roll), an oozing fried egg and melted American cheese. While it may taste like a regular, though well-made ham, egg and cheese sandwich to an L.A. native like myself, it may hold some nostalgia for East Coasters. "Taylor Ham is a Jersey thing and I grew up loving that shit, and I was like, 'That's what we need.' There's only one place in town where I could find Taylor Ham."

One of Yeastie Boys' fancier creations is the "#2," made with Michel Cordon Atlantic smoked salmon, with a lemon-chili-avocado spread, red onion cream cheese, sliced tomato and dill on a sesame bagel. It's a play on "The Lox" that they regularly serve at their truck, and has sort of a Mexican influence when compared to the other sandwich. 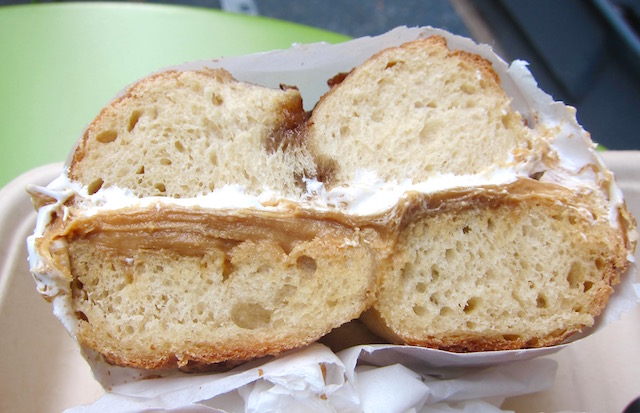 If savory's not your thing, Yeastie Boys also has the "#4," a hand-rolled cinnamon bagel with a house-made marshmallow fluff and a salted honey and peanut butter. It's a step up from your average PB&J. However, it's a sweet and large one, and I suggest sharing it with a friend or two.

When the lunchtime menu kicks in, you'll find heartier bagel sandwiches with pastrami or smoked turkey. There's also the "#8," made with salami, sopressata, prosciutto, a roasted garlic spread, chili olive tapenade, red onion and grilled endive on an everything bagel.

If you're a purist, you can just get one of their plain, poppy, sesame and everything bagels with house-made cream cheese.

As for why Fox got into the bagel business, it has to do with how he felt the bagels were lacking in L.A. When Fox went back home to New York to visit family and friends, he was eating bagels around the clock. "When I went there, I was sort of reaffirmed to the fact that L.A.'s bagels were really wack," he says. "There were a couple of spots in town that were OK but nothing really compared to what I had there... How did they miss this in L.A.? There are so many Jews here and that's my premier food growing up as a Jewish boy."

He and his former business partner, James Reamy, were previously in design and marketing before they ventured into bagel-making. They came up with the idea for the food truck, and the name "Yeastie Boys" when they were really stoned one night. The food truck, which Fox says is rundown and a "death trap" for him and his team, will still keep chugging along even though Yeastie Boys has a brick-and-mortar home now. Throughout the week, they'll still bring the truck out to their regular haunts: Dinosaur Coffee, Alfred Coffee, Stumptown and Verve. "The truck is our punk rock version of the bagel shop," Fox says. "It's always got to be around. It's like an institution on the weekends in Silver Lake." 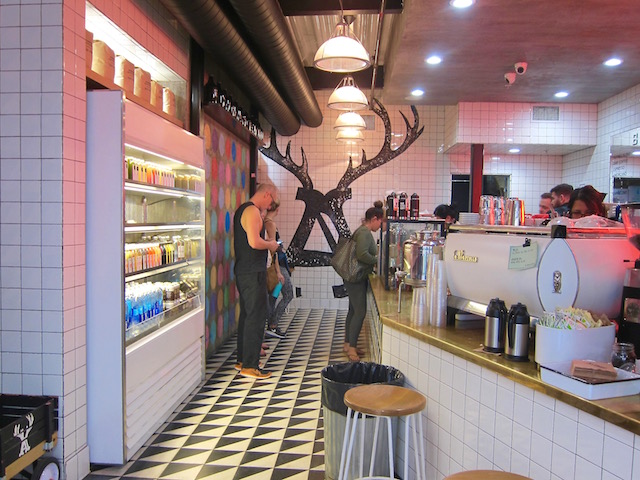 Editor's Note: An earlier version of this story said Fox was from New York, but he said he misspoke and meant he lived there for two years. We also added the name of his former business partner, James Reamy, to the story.