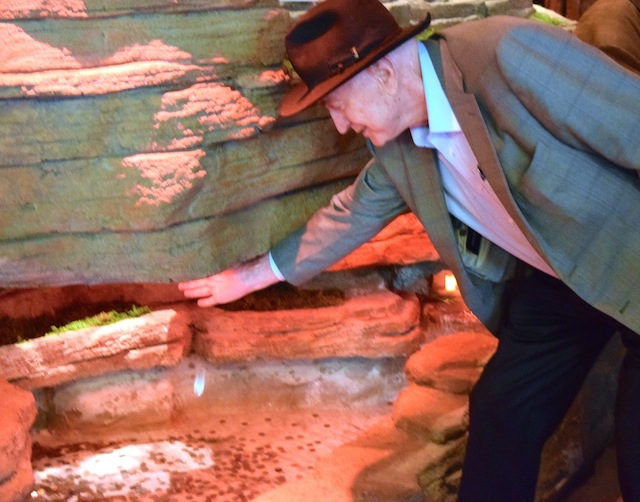 Willie Gordon returns the coins he once took from Clifton's wishing well (Photo by Danny Jensen/LAist.com)

Decades after 'borrowing' coins as a poor shoeshine boy from the wishing well of Clifton's Cafeteria, a now successful author and retired lawyer is returning what he took—and then some—to help those in need.

Beginning in 1944, a young William C. Gordon—better known as Willie—would shine shoes in downtown Los Angeles, not far from the recently re-opened Clifton's. After a day of work, the then six-year-old Willie would head over to Broadway and supplement his meager income courtesy of The Old Tree Wishing Well—a fountain feature like others found in the other Clifton's locations—where patrons could toss coins. The money would be later donated to charitable organizations, but Willie decided to take matters into his own hands. As he tells LAist:


I used to shine shoes on Main St. with a shoeshine box that I made myself and would charge a dime. By the end of the day, I would have a dollar. And then I would come up to Clifton's, which was known for its generosity. And there was a fountain there that said, "This is for the poor." So, I figured, "What the hell, I'm poor," so I would take some money and put it in my pocket. And I did that for three or four years, and I would eat there, too, because it was cheap—probably a hot dog and French fries. 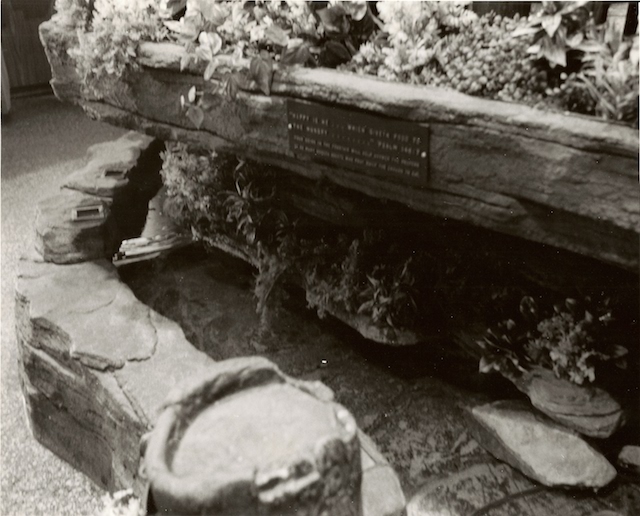 Before shining shoes and making his trips to Clifton's, Willie had traveled extensively with his father, William L. Gordon, a writer and a painter, who in his spare time invented a religion known as "The Infinite Plan." But the traveling ended when Gordon, Sr. passed away when Willie was six. Willie, along with his brother, sister and their mother Anna moved to 1st and Indiana Streets in East L.A., where a woman who was his father's partner in religious matters owned property. The woman was also his father's suspected mistress, and she was later arrested for allegedly practicing black magic. As Willie's mother grew depressed and largely cut off from the outside world, Willie and his siblings were largely left to their own devices, leaving Willie to spend time shining shoes as well as reading and learning Spanish in local libraries.

Willie's regular trips to Clifton's continued until 1947 when the family relocated to Whittier, though as he tells us, "On a few occasions as a teenager, I would come in and load up." 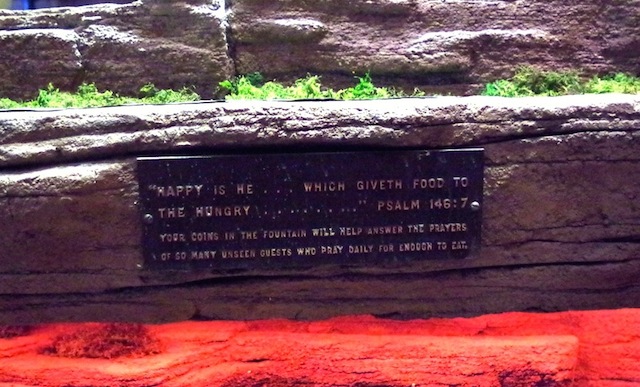 "Happy is he...which giveth food to the hungry." (Photo by Juliet Bennett Rylah/LAist)

After graduating from Whittier High in 1955, Willie headed north to major in English literature at UC Berkeley. He would later go on to serve as a lieutenant in the Army, but his service ended just before the Vietnam War. He then caught the wanderlust bug his father seemed to have had and spent an entire year circumnavigating the globe by hitchhiking—saving money by sleeping in cemeteries and spending just $1,400.

Upon returning, Willie attended Hastings College of Law and would go on to represent men and women throughout California who had been injured on the job, particularly assisting those from poor Latino communities where he was able to put his bilingual skills to good use.

In 1987, he met and soon married Isabel Allende, the famous Chilean-American author. Allende would eventually write a novel inspired by Willie's life, which borrowed the title of his father's invented religion and book of the same name, The Infinite Plan. She also inspired Willie to also write and when he retired from practicing law in 2002, he took up writing detective novels, primarily set in San Francisco in the 1960s.

Then, nearly 70 years later, Willie was suddenly reminded of his days swiping coins from the wishing well of Clifton's and was inspired to return what he had long ago "borrowed."

"Last year, I was telling a friend of mine my L.A. stories and he told me that [Andrew Meieran] had purchased Clifton's and rebuilt it just like it was before," Gordon tells LAist. "And then he sent me a picture of the wishing well, and it was empty. So, I told him, 'I've got a great idea. I'd like to give him a thousand bucks, which is with interest for all the money I stole.'" 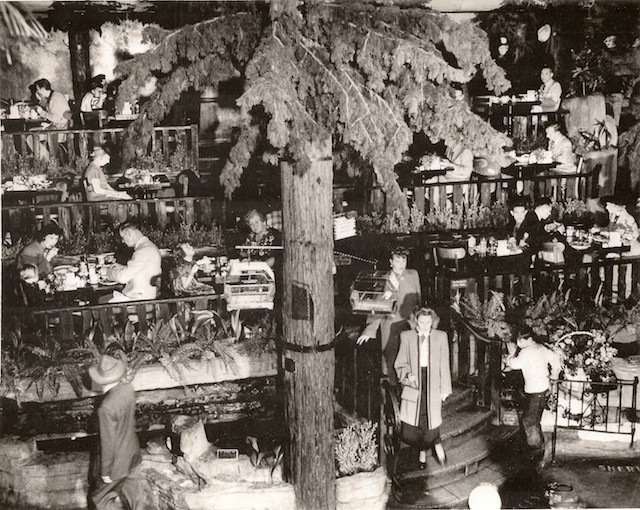 Ultimately, Willie's donation amounted to over $1,500, which he brought to Clifton's entirely in coins this past Saturday—with a few helping hands to carry the weight and toss the coins back into the fountain. Willie's contribution will go towards the Midnight Mission, which offers emergency services, addiction recovery, job training and work programs to the homeless of L.A.

Meieran, who was already working with the Midnight Mission to employ over 30 current and former individuals from the program, was thrilled by the idea of Willie returning the money for charitable efforts. He tells LAist:


Willie actually cut out the middleman—a rather ingenious way of handling it—but the idea for the well was to literally help people. And it was to be an inspiration for people to find what they need in their lives now, but to also go on and do great things within their lives. And this is a success story all around and it comes full circle, the money coming back to put the money back into the community for positive projects and do the same thing for future generations.

Founded in 1914, the Midnight Mission actually has a long history of working with Clifton's—known for never turning away the hungry or homeless, even during the Depression.


The Mission started over 101 years ago, and has dedicated itself to providing the assistance necessary to return people back to self-sufficiency in our community. And Clifton's was really even a partner back in our early days. During the Depression we were Federal Relief Station, and Clifton's assisted in making sure that people were able to eat. In those days, it was tens of thousands of people in the streets and really struggling. So, we provided the housing and Clifton's helped feed those people. There's been a very strong link that goes back at different times throughout our history. 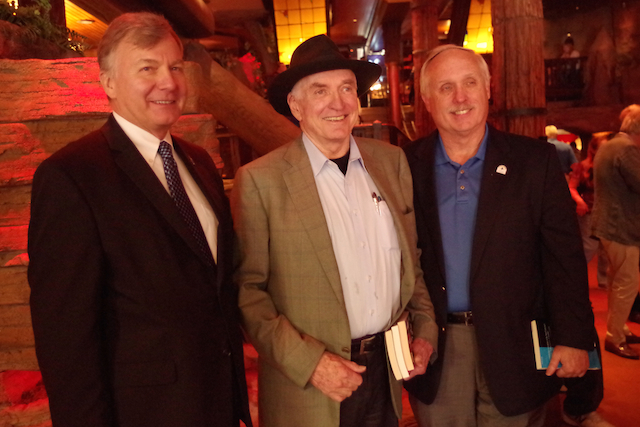 Meieran, Adamson, and the Midnight Mission's new president and CEO, G. Michael Arnold, all hope that Willie's gesture will serve as inspiration for others to give back to the community. Willie has also contributed significantly to several libraries that also served as refuge and inspiration for him at an early age, including those at Whittier High and the city of Santa Fe Springs.

"Hopefully, 55 years from now we can see somebody come back who benefited from this example," Meieran tells us. "One of the great things about downtown is that it's an economically diverse community, and I think that it's important for a business to be fully integrated within a community and recognize both its problems and its benefits. And that's taking the opportunity that there is a boom, but there's also a bunch of people that need help."