For the past three years, Robert Petersen has been schooling his Hidden History of Los Angeles podcast listeners on L.A.'s past, covering everything from city planning (why does the 2 Freeway come to an abrupt end in Echo Park?) to how L.A. got its name. His podcast installments (listen here) are never more than 20 minutes long, and serve as a basic 101 introduction course to the city's history.

Recently we asked Petersen a little bit about his podcast, and some of L.A.'s more intriguing bits of history.

What inspired you to start a podcast about L.A.’s history? Both sides of my family have resided in the Los Angeles area since the 1930s so I have been hearing stories of L.A.’s past since I was little—like my dad seeing the Hollywood Stars play at Gilmore Field or my grandmother taking the streetcar to visit the Bullocks Wilshire Tea Room. In college, I started studying L.A. history and wrote a thesis comparing the historical development of different Los Angeles neighborhoods. I have been obsessed with L.A. history ever since. The podcast has been a great outlet and allowed me to share my love for this city and its history.

You’ve been doing the monthly podcast since 2013, what has been your personal favorite episode to work on? My favorite episode was the Colonel Griffith episode where I created the scene where Griffith, the namesake for Griffith Park, shot his wife in the face after accusing her of conspiring with the Pope to poison him. After being shot in the face, the wife jumped out the window but, luckily, landed on a veranda one floor below and was pulled to safety. You can’t make this stuff up. The voiceovers were done by my wife, Sarosh Qaiser, and my friends, Amad Jackson and Justin Sarno.

Are there any history mysteries you’ve come across? One of the most interesting mysteries is the dispute about the original name of Los Angeles back in 1781 when it was founded. Was it “El Pueblo de la Reyna de los Angeles,” or “El Pueblo de Nuestra Senora de los Angeles de Porciuncula,” or something else? Take a close look at the various plaques and historical markers downtown and you will see a variety of different names.

Two noted historians, Doyce Nunis and Francis Weber, attempted to definitively answer the question, but they came up with different answers. So the mystery remains. It’s somehow fitting that a city that is known for forgetting its past doesn’t even know its own name. 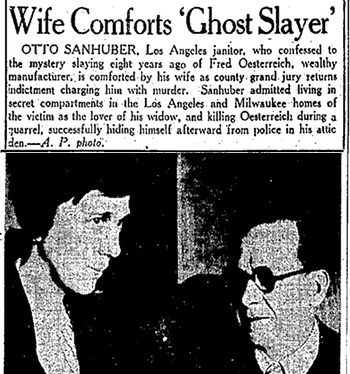 What is the strangest thing you’ve learned about L.A.’s history? There is a lot of “strange” in L.A. history, but what first comes to mind is the Bat Man Case, when a 1920s Silver Lake woman [Walburga "Dolly" Oesterreich] kept a young man, Otto Sanhuber, as a sex slave in her attic for years. Her husband had no idea. Then one night during an argument Sanhuber came out of the attic, shot and killed the husband, staged a fake robbery with the wife to cover up the murder, and then went back in the attic to hide. And they almost got away with it. But the wife’s continuing sexual affairs with multiple other men caught up with her when some of her lovers began revealing details of the crime to the police.

The house where the murder took place still stands on Lafayette Park Place in Silver Lake. I would be interested to know if the current inhabitants know what happened inside their house.

What are the top three things everyone should know about L.A.’s past? First, L.A.’s connection with its Native American past. When you look at where we live, the routes we travel, and place names we use everyday, you will find many influences from the Native Americans who used to call this place home.

Second, cultural diversity has always been a part of our city’s history. The original settlers from 1781 were a mix of Spanish, African and Native American descent. L.A. was first a Native American village, then a Spanish town, and then a Mexican town, before becoming an American city. And there have been Angelenos of Mexican, African, Chinese, Japanese and European descent for over a hundred years.

Third, the city that we know today as Los Angeles was made—it was created. In 1870, there was little to indicate that this 5,700-person town would become a world class city. But within 100 years, it grew almost 500 fold to become the third biggest city in the country. And now it’s the second largest. The city didn’t have enough water so William Mulholland built a 200-mile aqueduct to the Owens Valley. The city lacked a natural harbor so it built one. Images of oranges and rose floats sold the city to millions of potential residents. And then needing to get all these new residents to and from the new real estate developments, Henry Huntington built an enormous transit system of streetcars that covered 25 percent more track mileage than New York City's current subway system. Los Angeles was not necessarily born to be a world class metropolis. Angelenos made it into one. 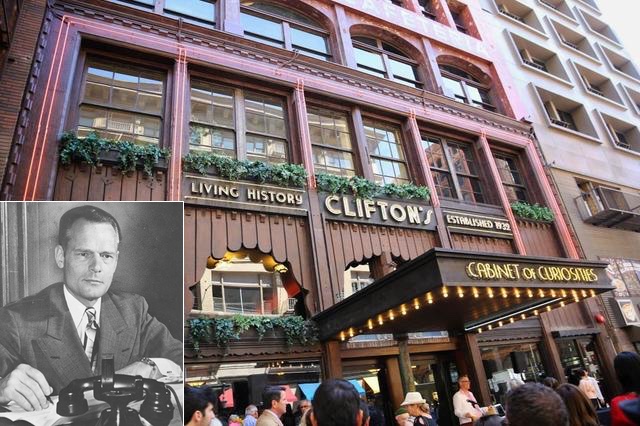 Who are the most interesting people in the city’s history? This city has been, and continues to be, full of interesting people. A few that come to mind are Clifford Clinton, the founder of Clifton’s Cafeteria. He began an unlikely crusade against corruption in Los Angeles in the 1930s and in the process brought down the mayor and police chief, but not before the LAPD bombed his house in Los Feliz.

Or Biddy Mason, who was born a slave, came to Los Angeles where she petitioned a court for and gained her freedom, built a career as a nurse and a midwife, bought property near Spring and Third Streets in 1866, and used her business skills to become one of the wealthiest black women in the country. She also helped found a school for black children and the city's first black church.

Or Aimee Semple McPherson, an evangelist and media celebrity who founded Angelus Temple across the street from Echo Park in 1923. She was a pioneer in the use of modern media and used radio to broadcast her colorful sermons, which often included elaborate sets and costumes, or even her riding a motorcycle. Angelenos were riveted when she mysteriously disappeared while swimming off a beach in Venice. She appeared weeks later in Mexico saying she had been kidnapped though many doubted her story.
Alexander Pantages, Clara Shortridge Foltz, Jackie and Mack Robinson, Harrison Gray Otis, Griffith J. Griffith, the list of interesting Angelenos goes on and on. 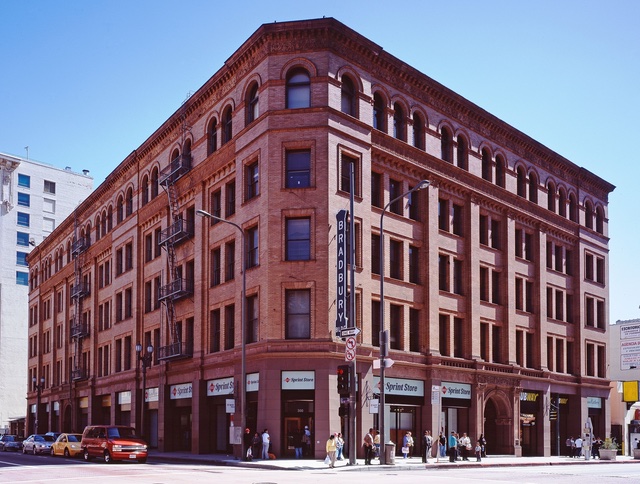 Bradbury Building. (Photo courtesy of the Library of Congress)

Do you have any favorite historic buildings in L.A.? I love the variety of buildings and architecture in L.A.—the good, the bad, and the ugly. If I had to pick a favorite, I would say the Bradbury Building, built in 1893. Nothing that remarkable from the outside, but the interior of the building features a beautiful natural light-filled atrium with an extremely high ceiling, two open cage elevators run by a human operators, marble stairs, and beautiful iron railings. It is a frequent location for movies and commercials, notably Blade Runner and 500 Days of Summer. I also love the backstory of the building. It was designed by George Wyman, who had no formal training as an architect. When initially offered the job, he wasn’t sure if he should accept. So he and his wife consulted a “ouija-like” board and received a message from his dead brother indicating that he would be successful if he took the job. So we need to give some thanks to the spirit world for this beautiful building.

Are there any other L.A.-centric podcasts you’d recommend? Several great radio shows or segments are available as podcasts: KPCC’s Off Ramp, LA Observed with Kevin Roderick, Which Way L.A. with Warren Olney. L.A. Public Library’s ALOUD podcast has some great programs. And although it hasn’t been active recently, You Can’t Eat the Sunshine features interviews with some fascinating Angelenos, and the hosts, Kim and Richard, provide weekly updates on history related issues in L.A. And while not a podcast, I would also recommend the web series “Tom Explores Los Angeles.”