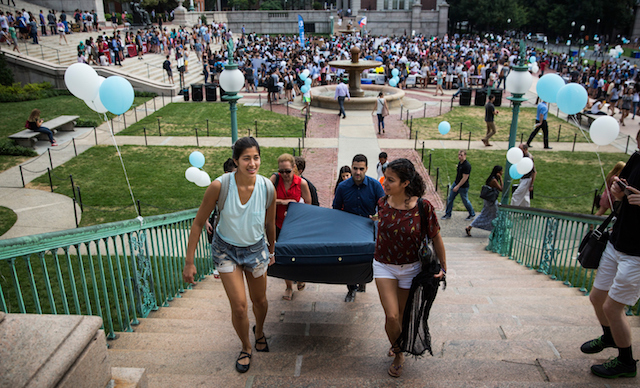 Emma Sulkowicz, the Columbia University graduate who carried her dorm room mattress around her university to protest the way the school handled her rape claim against another student, is having her first solo art show at a gallery in Chinatown.

Sulkowicz, 23, created a controversial art piece that went, as they say, viral during her senior year as a visual arts student. Starting in September of 2014, she carried a mattress with her around campus everywhere she went. The mattress weighed 50 pounds, just like the kind used by Columbia in the dormitories. Sulkowicz said that in 2012, she was raped by a fellow student. She said it began consensually, but he became violent. She stated she would carry the mattress until her alleged attacker left the university or was expelled through disciplinary action. Neither happened, and ultimately, the two students both graduated in May of 2015 and Sulkowicz carried the mattress, aided by other classmates, to her graduation.

Sulkowicz's first solo show opens on Feb. 27 at Coagula Curatorial in Chinatown. There are two distinct artworks in the show, she told LAist.

The first, and perhaps simplest, is called In-Action Figure. She used a 3-D printer to create 10 replicas of herself, each about 14 inches tall. The idea behind the figures is the "commodification of my image," Sulkowicz explained. The figures created by a 3-D printer are easy to replicate in large numbers. 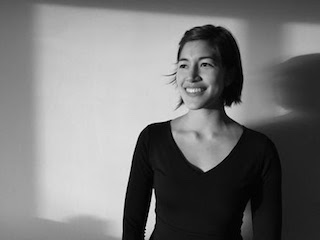 Emma Sulkowicz (Photo courtesy of Coagula Curatorial)
"The idea is that I've been so widely publicized in the media, which was completely unexpected and unprecedented for me," she said. "I've seen my image become so mass-produced. Now, if anyone wants to mention anything about campus rape, they'll invoke my name even if I'm only marginally related to what they're talking about. My image has sort of become this currency that you use if you want to talk about anything related to these topics."

The second part of the show—Self Portrait: Performance of Object—will involve either interacting with her or a proxy. She will stand on a pedestal about a foot off the ground, and on a nearby pedestal of the same height, you will find Emmatron. Emmatron is a life-size rubber replica of Sulkowicz, made via a mold of Sulkowicz. Emmatron has a speaker inside of her throat and she can 'talk.' You can stand on pedestals in front of both Sulkowicz and Emmatron that will raise you to their level as you attempt to communicate with them.

One might begin by talking to the flesh-and-blood Sulkowicz.

"I'll be there during gallery hours every day that it's open, and I'll just be doing my thing," she said. "You can come talk with me. You can ask me whatever you want."

But there's a catch. There are certain questions that Sulkowicz has been asked so many times that she's just not interested in verbalizing her response anymore. These questions she has pre-recorded for Emmatron to answer, so you may be redirected from Sulkowicz to Emmatron during your conversation. To communicate with Emmatron, guests will use an iPad to scroll through an app that contains a list of said questions.

"It's a separation between me as a human being versus this sort of way that people can treat me as if I'm a robot when they ask me very repetitive, insensitive questions," she said.

These questions are ones that pry into Sulkowicz's allegations of assault, or how she dealt with the negative side of media attention.

"The truth is that I was never able to cope," she said, referring to the Internet harassment that comes with 'going viral.' "It's not like any amount of support was going to cancel out that people were Facebook messaging me to kill myself."

Many of the questions are ones that were posed to her via the Internet in comment threads on articles or elsewhere. In one particular instance, she said that her alleged attacker spread a number of lies about her, including one that she had asked him to perform a particular sex act with her via Facebook messages. Those commenters probably never expected Sulkowicz to actually answer their questions about the topic, but Emmatron will.

"It's been interesting to respond to those weird things that have spun out of control," she said.

One shouldn't necessarily feel bad about being directed to Emmatron, should it happen unintentionally.

"It's been fun to record these questions for Emmatron, and I think that she'll be fun to play with, if you know what I mean," she said. "She'll have fun things to say. Hopefully, the end result is lively and entertaining, but I'm also trying to drive home a serious point."

Emmatron's questions may also change throughout the show. If Sulkowicz is asked certain questions several times during her time at the gallery, she may pre-record answers to those questions and add them to Emmatron's repertoire.

Sulkowicz will be present in the gallery from Feb. 27 to March 18 during the gallery's operating hours. Emmatron and the In-Action figures will be at the gallery, sans Sulkowicz, for an additional two weeks.