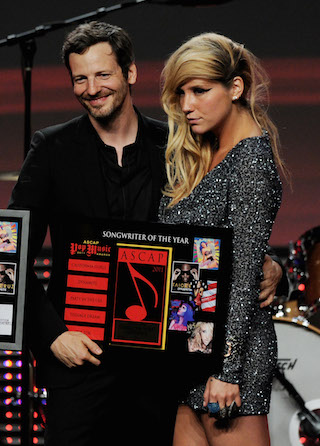 Kesha and Dr. Luke at the ASCAP Pop Music Awards in 2011 (Photo by Kevin Winter/Getty Images)
Pop star Kesha wept in court today as her request for an injunction that would release her from her contract with Sony Music and the producer she claims abused her for a decade was denied.

Kesha Sebart, 28, who rose to fame as Ke$ha with pop party anthems like "Tik Tok" and "Blah Blah Blah" sued her producer, Lukasz Gottwald (better known as Dr. Luke), in 2014, alleging that he had sexually and emotionally abused her over their 10 years of working together. In 2015, Sebert and her lawyer, Mark Geragos, began pushing for an injunction that would allow her out of her contract with Gottwald's label—Kemosabe Records, owned by Sony Music—and to record new music with someone else. Her contract has her signed on for another six records with the label, according to New York Daily News.

New York Supreme Court Justice Shirley Kornreich today told Sebert's attorney, Mark Geragos, "You're asking the court to decimate a contract that was heavily negotiated and typical of the industry."

Former Universal Music Group Distribution CEO Jim Urie wrote in an affidavit submitted with the injunction request that if "Kesha cannot immediately resume recording and having her music promoted, marketed, and distributed by a major label, her career is effectively over," according to The Verge.

Gottwald has denied Sebert's allegations and claims this is a ploy on her part to be released from her contract, claiming she's upset about a stalled career. Gottwald's lawyer, Christine Lepera, said in a statement, "It was Kesha who chose to file a lawsuit falsely alleging abuse to gain advantage in contract negotiations, and now she must accept the consequences of her improper actions."

Lawyers for Gottwald argued that he had invested $60 million into Sebert's career, and that he had also agreed to let her record without his presence or involvement. Sebert, who wept in court as her request was denied, has expressed concern that Sony would not promote her music if she worked with a different producer. Geragos has called Gottwald's promise "illusory" and believes that Sony is protecting Gottwald because he makes them more money, an argument that Kornreich called "speculative."

In Sebert's suit against Gottwald, she alleged that he once drugged her and then forced himself onto her on a plane. She said another time, she woke up naked in his bed with no idea how she got there after Gottwald had offered her some "sober pills." Sebert would have been 18 at the time, and her lawsuit states she did not come forward because Gottwald had threatened her career and family if she didn't stay quiet.

In another instance, she claimed that he began "violently thrashing his arms at her" in his Malibu home, and that to escape him, she ran down PCH barefoot and hid in the mountains. At one point, she alleged he told her, "You are not that pretty, you are not that talented, you are just lucky to have me." She said he also once called her a "fat f*cking refrigerator," according to the Daily Beast. She said the abuse led to her developing an eating disorder, for which she checked into a treatment center.

Sebert has also complained about a lack of creative control, telling Rolling Stone that "what's been put out as singles have just perpetuated a particular image that may or may not be entirely accurate," and that she didn't want to just keep "putting out the same song and becoming a parody [of] myself."

Kornreich delayed making a decision on whether or not to dismiss Sebert's lawsuit against Gottwald, but did say that Sebert has not provided hospital records or other evidence to support her allegations.

There is currently an online petition with over 120,000 signatures from Kesha supports who hope that she can be freed from her contract and having to ever work with her alleged abuser again.