Lautner-Designed House From 'The Big Lebowski' Donated To LACMA 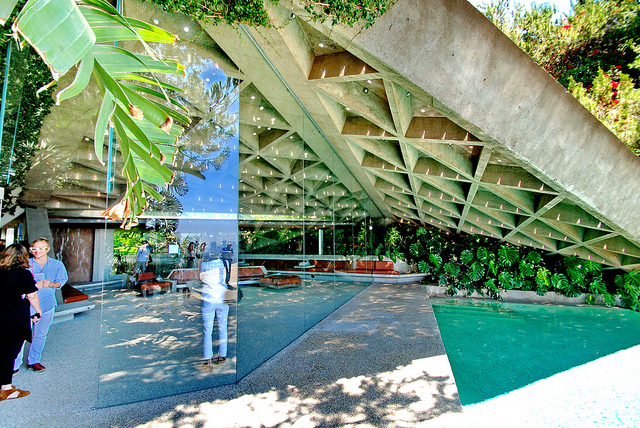 You know the house in The Big Lebowski where Jackie Treehorn (Ben Gazzara, R.I.P.), the pornographer and loan-shark, drugs The Dude before catapulting him out onto Pacific Coast Highway? The one that, like so many Angeleno homes, blends modernist architecture and brutalism together in a way seemingly only fit for a Hollywood villain?

Well, its owner, James F. Goldstein, has agreed to donate the John Lautner-designed Sheats-Goldstein House to LACMA, according to the L.A. Times. The house, located in Benedict Canyon just north of Beverly Hills, represents the first of what we can only hope will be many eventual donations to the museum, intent upon preserving smart examples of distinctly Angeleno architecture, and perhaps saving them from the annals of redevelopment.

The donation includes the house, a $17 million endowment for maintenance, as well as several other adjacent properties (and improvements) also owned by Goldstein, according to Artforum. According to the L.A. Times, Goldstein will allow limited tours while he is still living in the house.

"For me it ranks as one of the most important houses in all of L.A.," says Michael Govan, LACMA' director and chief executive, to the L.A. Times. "And as one of the most L.A. houses, because of its connection to the view, that long view toward the ocean."

When Govan took his post at the museum, he expressed interest in acquiring examples of L.A.'s residential architecture, preserving them and opening them to the public as satellites of LACMA. When he first announced his intention, several homeowners offered to sell their significant houses to the museum, but Govan was holding out for a donation.

Goldstein's donation comes nearly a decade into Govan's tenure at the LACMA, but represents a significant acquisition for the museum; LACMA estimates the total value somewhere around $40 million.

The house itself was built in 1963, but it wasn't until Goldstein purchased the home for $185,000 in 1972 that the home was gutted and rebuilt under Launter's supervision to create a purer vision of the architect's plans. Goldstein wanted to make the home "perfect," allowing Lautner to go wild and built a modernist paradise of man-made materials.

Watch the house appear in The Big Lebowski below. We scoured the internet and couldn't find a version in English, but we figure you're clicking to look at the house anyway. Now's a good time to test your Italian: