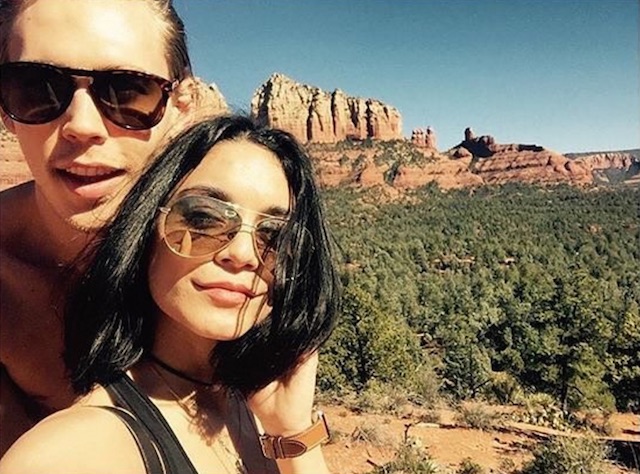 Vanessa Hudgens and her boyfriend are being investigated for possible vandalism after the High School Musical star posted a particular photo to her Instagram account.

Hudgens and her boyfriend, actor Austin Butler, apparently went to Arizona for Valentine's Day. Hudgens posted several photos of their trip to her Instagram account, but the one that may potentially get her in hot water is one taken in Coconino National Forest in Sedona. The picture, which appeared to show a heart, reading 'Austin + Vanessa' inside, scratched into red rock, TMZ reports.

Defacing nature on federal property is a big no-no, and could lead to a $5,000 fine or six months behind bars.

Hudgens has since deleted the post, but the screen shot lives on.

.@VanessaHudgens could be in legal trouble after leaving this memento of their trip to Sedona behind! Thoughts?! pic.twitter.com/4N9WTYPd6p

A casual glance at the other trip photos on her Instagram reveals the typical Internet excoriation and debate. "You horrible, stupid waste of oxygen," remarks one commenter. Another defends Hudgens by saying, "Its (sic) just a stupid rock."

It's not just a stupid rock in the eyes of many, though, and for some bizarre reason, people just don't seem to realize that you can't go around writing all over protected nature reserves and national parks. The case is still open when it comes to artist Casey Nocket allegedly vandalized eight different national parks. Additionally, Street artist André Saraiva drew ire after posting photos to Instagram indicating that he tagged a boulder in Joshua Tree National Park.