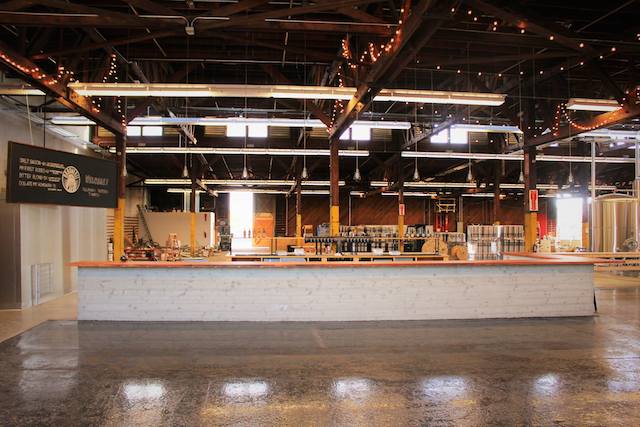 A new craft brewery is opening its tasting room doors at the Port of Los Angeles later this month.

Brouwerij West has been treating beer lovers to their artfully-labelled, Belgian-inspired ales at craft beer destinations around L.A. and beyond since 2010. But since then, they haven't had place to call home, instead using the equipment at other breweries across the country and in Belgium for production. That will all change on February 27, when they open their production brewery and tasting room, according to the L.A. Times.

The Brouwerij West tasting room will feature new brews, as well as existing ones, including their farmhouse ale, My First Rodeo, and the Dog Ate My Homework, which is a saison made with blackberries. Some of the new offerings will include a Belgian-style white ale made with Seville oranges, and a bitter blonde ale.

Founder Brian Mercer tells LAist that they plan to source locally for many of the raw ingredients, including some unconventional ones. Much of their grains are sourced from two small farms, one in Oregon and one in Washington, but they'll also include some nearby farms including one in Palos Verdes, which is growing hops, barley and citrus for them. The brewery will also use a diverse array of yeasts and bacterias, as well as specialized equipment usually seen in large European breweries. They also just added a new, high-end water filtration system. Bottling at the brewery will start next month and they'll soon be offering a unique aged buckwheat beer with plenty of sour notes.

"We're just really interested in learning to make great beer," Mercer tells LAist. "We have a great love of process and we want to become great brewers."

The 8,000 square foot tasting room and event space will be located in a massive, high-ceilinged warehouse, which will include a long bar built with reclaimed wood and communal tables, with the production equipment visible behind. The huge building, known as Warehouse No. 9, was built by the U.S. Navy at the end of World War II. And with the help of landlord Wayne Blank, Brouwerij West has restored the space and built out the brewery, while maintaining as much of the historical grandeur of the space as possible.

They also plan to eventually open a beer garden in the building's 10,000 square foot courtyard with Sycamore trees. They're also permitted for live music outdoors every night of the week with plenty of parking. Eventually they hope to add a large restaurant with the help of Birch's chef Brendan Collins, but those plans have been pushed further down the road for logistical reasons.

The grand opening for Brouwerij West will take place on Saturday, February 27 from 12 p.m. to 9 p.m. and feature food trucks, live music, brewery tours and more, according to their Facebook page. After that, they'll be open Fridays, 4 p.m. to 8 p.m., and Saturdays and Sundays from noon to 8 p.m.