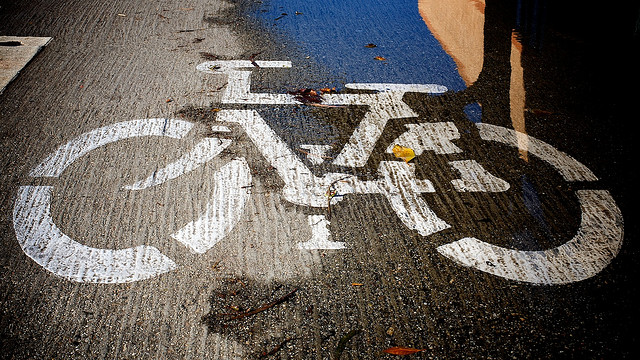 L.A. City Council's decision to approve Mobility Plan 2035 last August made lots of people—who apparently think cars are the future—angry. For this reason, the City Planning Commission held a special meeting this morning to determine whether or not proposed bike lanes on two streets, Westwood Boulevard and S. Central Avenue, would be removed from the plan, as several folks and two City Councilman want.

Following hours of public comment from community representatives and stakeholders alike, the Planning Commission decided the lanes should stay, according to Streetsblog Los Angeles.

This choice goes against the wishes of L.A. City Councilman Curren Price, from South L.A., and Paul Koretz, from West L.A. Both Price and Koretz argue that the proposed lanes should, on the streets in their respective districts, be eliminated from the Mobility Plan.

Koretz argues, according to the L.A. Times, that adding lanes will make the streets less safe for people on bikes, saying that more riders means more collisions. Of course, this argument completely overlooks that the Westwood Boulevard (similar to Central Avenue) is already a heavily used biking-corridor, close to UCLA, with no current infrastructure.

Price echoes this logic, and said in an email to Streetsblog how "as a grandfather of small children," he "would feel uneasy riding our bikes along this busy thoroughfare knowing the dangerous implications."

Dangerous implications, like riding totally unprotected in high-speed traffic? Or like riding adjacent that traffic in a designated lane?

Per Price's reasoning, the street is simply too unsafe for bicycles, and therefore, despite being the most heavily bicycle-trafficked street in all of Los Angeles, the bike lanes will lead to more trouble.

This is malarkey, given designating space on the street specifically for people on bikes only makes the street safer. Over the past decade, Central Avenue has seen more than 300 reported collisions between bicycles and vehicles. Westwood Boulevard is, likewise, the site of 52 collisions.

Mobility Plan 2035 is an attempt by the city of Los Angeles to help people move themselves around the city more easily. The City Planning department believes that the best way to do this is by prioritizing the development of public transportation, and encouraging people to walk or ride a bike. At the same time, prioritizing transit and other non-car options means appropriating some street-space currently used by private vehicles and handing it over to bikes and buses.

Consequently, as admitted by the Department of Planning, traffic in some locations will get worse. The trade-off is that these neighborhoods will have vastly better transportation infrastructure, giving Angelenos the option to really use public transportation in a way they haven't been able to in decades.

The bike lanes will stay.