Food Writers Fooled By Gourmet Meal Made With McDonald's Ingredients 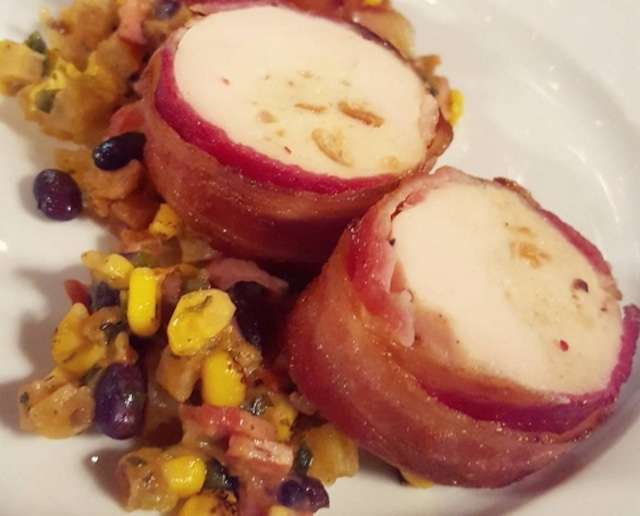 A celebrated L.A. chef tricked a group of food writers by serving an elaborate five-course meal that was secretly made with ingredients from McDonald's.

Neal Fraser has drawn extensive praise for his cooking at local hotspots like Redbird and the recently opened Fritzi at the Arts District Brewery, and last night a select group of writers were lovin' it with his own interpretations using the fast food giant's fare. According to the OC Register, around 40 writers were invited to a private dinner at the historic Carondelet House, where the former Top Chef Masters contestant informed them he would be "cooking with experimental" and "fresh" ingredients, and promised guests that there was "nothing sneaky". But they wouldn't find out until after the meal that those "fresh" items actually came from McD's suppliers.

A chilled and peppery avocado soup made by @nealfraser. But this isn't made with ingredients from @Redbird, it's @McDonalds.

Seated at a table with gold flatware and stylishly rustic decor, the writers made their way through the menu, which included chilled avocado soup, a buttermilk dressed romaine salad with bacon bits, spicy meatballs and bacon-wrapped chicken. But little did they know, they were chowing on ingredients typically used for McWraps, Egg McMuffins, and Quarter Pounders. Meanwhile, hidden cameras and microphones enabled McDonald's marketing officials to secretly observe the reactions to the meal.

"Unfortunately the perception is that it (our food) comes through the back door processed," Clay Paschen III, president of the McDonald's Operators' Association of Southern California, told the Register. "But we cook. We have a kitchen. Starbucks doesn't."

At the "Not @nealfraser Dinner cuz it's Really McDonalds" dinner and this came my way. Not sure if these were meatballs or just rounded quarter pounders with cheese but without buns and veggies, and the cheese.

According to the Register, Fraser had initially declined McDonald's pitch for the surprise meal, but ultimately agreed. Fraser was also reportedly paid an undisclosed amount of money for his services, which likely had something to do with him agreeing to peddle their wares.

A photo posted by Chef Eric Crowley (@chefericsculinaryclassroom) on Feb 3, 2016 at 9:51pm PST

Once the source of the ingredients were revealed following the coffee custard dessert, reactions varied from shock to laughter to disturbed looks. And, of course, plenty of Instagram posts.

Reached for comment, Fraser responded through his publicist to Eater LA, "It was an intriguing experiment. The challenge was the draw. Is it controversial? Sure. But this is also a means to keep the conversation going."