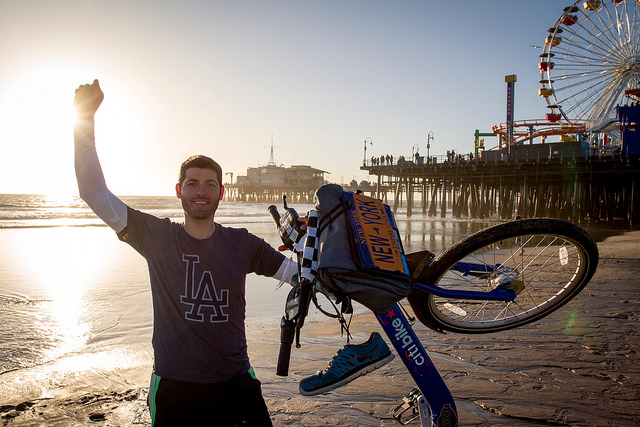 Two weeks ago, Jeffrey Tanenhaus pedaled his New York City Bike Share “Citi Bike” down to the end of Santa Monica Pier, and declared his cross-country trek, dubbed Countri Bike, over. It took him five months, but the native New Yorker finally managed to push the heavy, three-geared, bike-share bicycle across the entire United States, and arrive at the Pacific Ocean.

Like everybody else, I was undoubtedly curious to know the “why” behind Tanenhaus’ decision to snitch a shared-bicycle (he's since paid the $1,200 fine for doing so), and pedal more than 3,000 miles west from New York to Los Angeles.

Tanenhaus, 35, said he felt deprived by his job, working as a corporate events planner out of a dim windowless office in Manhattan. He always looked forward to his six-o’clock escape on the big and heavy Citi Bike. While other New Yorkers jammed themselves into subways, Tanenhaus pedaled for about 40 minutes through Manhattan, across the East River to his home in Brooklyn.

“I did it in almost any weather,” he recalled. “I remember coasting up First Avenue, bone cold, thinking about just how freeing it was to be outside on a machine that went where I told it to, and moved when I made it move.” 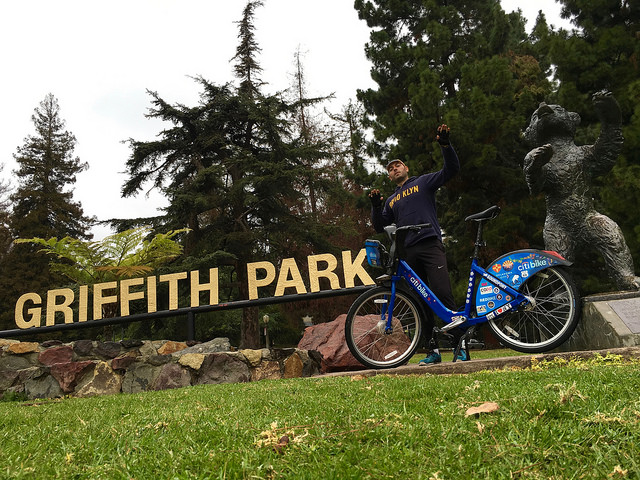 New York was getting to him, and the need for everyone to “make it,” as he says, was wearing him down.

“I feel like tourists are the ones who know how to do New York. They come in for a few days, see the sights, eat the food and leave before it really starts getting to them,” he explained. “New Yorkers don’t ever get out to experience their city. It’s like ‘oh yeah, we have this great museum. I’ll go visit it sometime, it’s just a quick train ride away, but not right now because I’m busy.’”

And Tanenhaus would know: he used to work as a guide for tourists in New York, and he also authored the app NYC Essential Guide. In November 2014, he quit his job. He focused on rewriting and updating his app, and then he began traveling around the world to places like Chile and even the infamous Death Road, in Bolivia. But when he returned home, he still wasn't ready to settle down. Though he has traveled through more than 50 countries, the voyager had never really traveled extensively through his own.

“I thought why not combine my bike commuting with something bigger. A trip across the country would be more of a travel than a bike ride, but I’d be doing it on something very familiar to me.”

Gesturing the holey running shoes he wore for the entire trek, he explained how he did the trip with little preparation. When he left New York in August of 2015 he did so with a laptop computer and a modest trailer attached to the bicycle, packed with some toiletries, a few changes of clothes, a one-man tent, a mattress pad, and no tools. He hoped he'd make it past Jersey.

“The bike is a magnificent way to travel. It opens up a whole different set of circumstances and constraints, that force you to stop at places you ordinarily wouldn't stop at if you were traveling in a car, or a train, or a plane.”

He logged about 40 miles each day, traveling on country roads where America opened up before him. 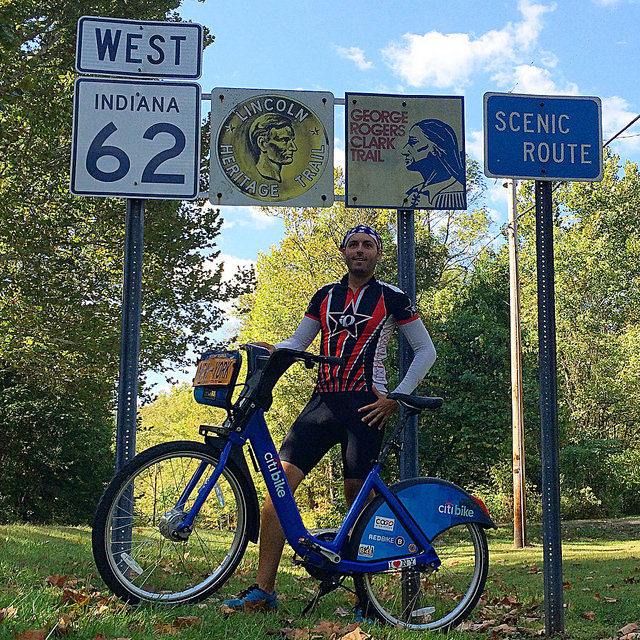 But sometimes he'd linger. For instance, he spent a little longer than he anticipated when he rolled up to New Albany, Indiana and stopped at a brewery. “It was just kind of serendipitous, I went to the brewery, got delayed, found this bed and breakfast, and ended up spending two days in this little town I never even planned to stop at.” 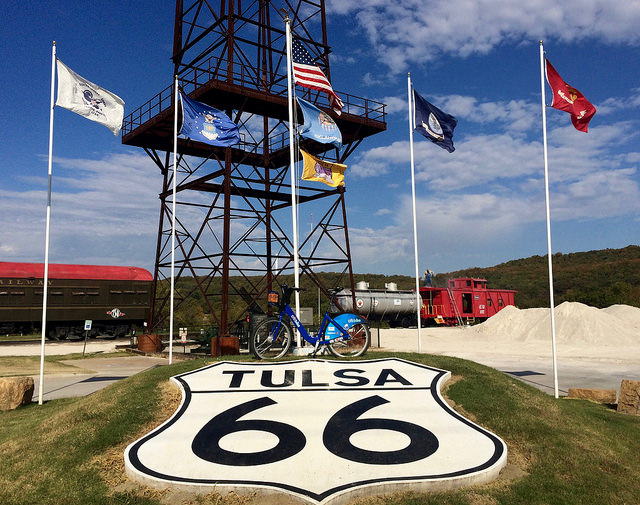 Again and again, Tanenhaus found himself drawn to smaller cities, finding that though they lack the sort of cosmopolitan reputation of his hometown, they have vibrant local cultures he liked as much, if not more, than his home. Where Angelenos and New Yorkers may look towards the middle with pity, Tanenhaus thinks the coasts could stand to learn something from the American interior. Some of his favorite places were Pittsburgh, Cincinnati, Flagstaff and Redlands. His absolute favorite was Tulsa, Oklahoma.

“It was kind of surprising. There is no ocean and there are no mountains,” he said of Tulsa. “It’s big enough to be a city, but small enough to feel like a community, and cool enough to attract a progressive crowd of young professionals.”

Incidentally, it was on his way out of Oklahoma that he had his only really bad experience with someone, when he was punched by a driver, apparently enraged that Tanenhaus had the audacity to ride his bicycle on a road. Tanenhaus found out later that the man who attacked him was arrested the same day after he tried to kill one of his neighbors with an axe. 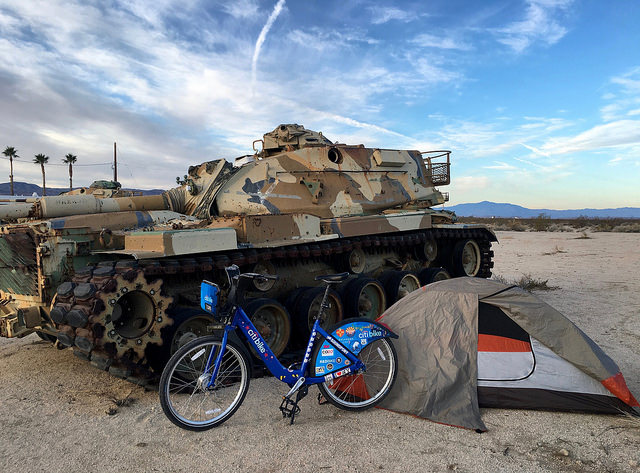 Using a bicycle as his travel vehicle required Tanenhaus to rely upon the charity of strangers often, and through these connections he managed to get to know locals more quickly than if, say, he was just driving through. Bike shops along the way, as well as locals contacted through Warmshowers.org (think Couch Surfing but for bike-touring), all supported him along his journey.

As he headed further west, however, the traveling got harder, especially as he found himself in some truly desolate parts of the Southwest. At a few points he hitched some short rides, but for the most part he managed to make it across even some of the more isolated parts of New Mexico, Arizona, and California on his own.

Upon reaching Los Angeles, Tanenhaus found himself welcomed in more ways than one. Los Angeles County Metro had been waiting for him, following his journey on Instagram, and invited him to see a preview of Los Angeles’ soon to debut bike share program of its own. Caltrans also called him up and barraged him with questions about riding on state highways outside the built-up parts of Southern California. 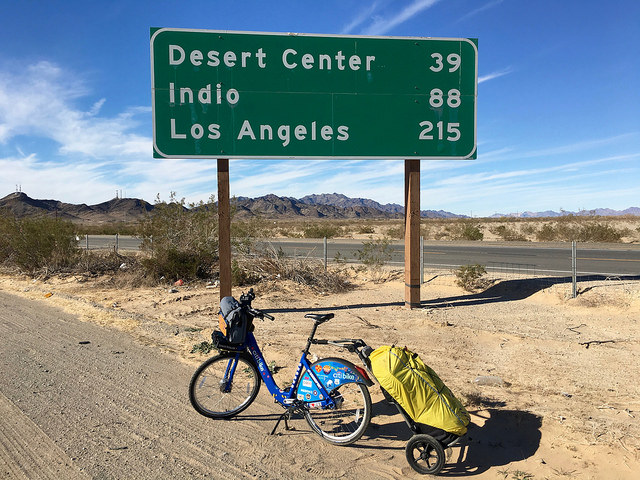 Riding on the shoulder of I-10 through the Mojave was, err, not so great. (Courtesy Jeffrey Tanenhaus)

Though some of the worst roads he faced were in California, notably when he had to ride on the 10 through the Mojave Desert, he’s found Los Angeles to be surprisingly bike-friendly, even when compared to New York.

“You always hear the bad things. L.A.’s full of cars, the drivers are crazy,” he explained. “But I’ve found drivers here are more courteous. In New York, a lot of the drivers are driving for work, so you’re in their way, Here, people seem to be more courteous. Maybe it’s because they spend so much time sitting in traffic they’re beaten down, but it’s a very noticeable difference.”

The disadvantage of riding in L.A. compared to N.Y.C. is its dearth of infrastructure. Where New York has plenty of protected bike lanes and separate signals for cyclists, Los Angeles is struggling to even get one fully protected lane built.

As for what's next, Tanenhaus plans on returning the bicycle to Citi Bike dock in New York City, through the shipping help of Santa Monica Breeze Bike Share. After a quick trip to San Francisco, he will return to New York for a some time while exploring the possibility of a more permanent move to Tulsa.

“I think the thing that surprises me most about L.A. is how complex its bike culture is,” he said. “I like L.A. It’s got a sort of grittiness to it that I didn’t expect. Riding through the city made me appreciate it much more than I had when I’d visited it in the past when I just passed through in a car.”

You and me alike. Enjoy your stay! 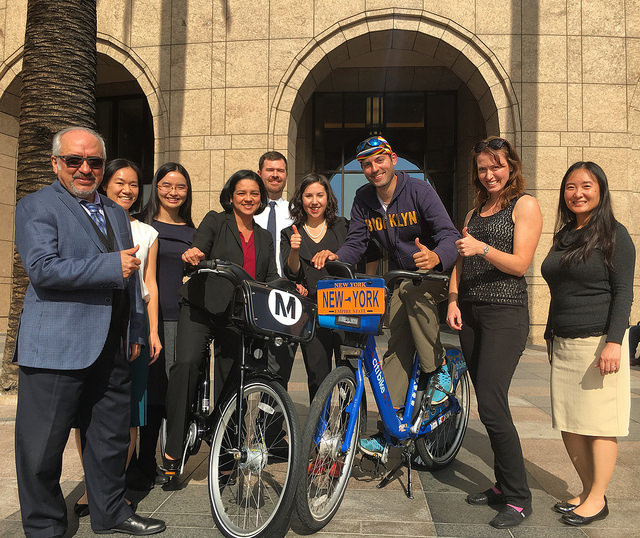