Los Angeles is well known for producing plenty of racy on-screen entertainment, but we also have our fair share of risqué live performances if you're so inclined. From impressive pole routines at fun and rowdy bikini bars to intimate private dances at sprawling topless and nude clubs, there are lots of options for anyone looking to make it rain dollars. Here are our favorite strip clubs in L.A. 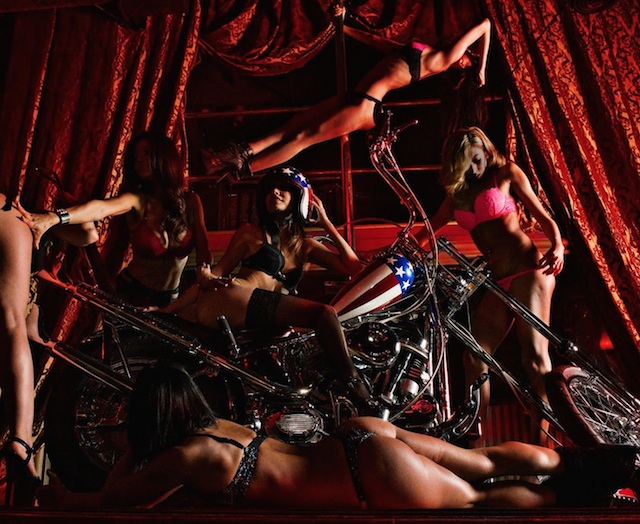 No guarantees on the motorcycle at 4Play (via Facebook)

Considered one of the best strip clubs in the country and L.A. by many, 4Play offers a premium experience, but it doesn't come cheaply. This all-nude spot is definitely the place to go for very attractive dancers, many of which are likely models by day, and a classy, upscale decor (White linens! Chandeliers! "Art" on the walls!). There's also a good chance you'll spot a celeb on a busy weekend night. There's typically a $20 cover, but you can save your singles if you use their "VIP" mobile pass, admission is free daily until 9 p.m. and half-off Sunday to Wednesday 9 p.m. to closing. As with every all-nude club in town, there's no alcohol, but be prepared for a non-alcoholic drink minimum. As an added bonus, the food at 4Play is actually pretty decent with sandwiches, salads and even breakfast for a late-night fix. You may be perfectly content to enjoy the impressive choreographed pole routines on the main stage. But if you're looking for something more intimate, be prepared to spend. Private chair dances go for $25 here, but big spenders head upstairs to the "champagne court" where 15 minutes will set you back $200, 30 minutes will cost $400.00, and $800.00 earns you an hour of time. There's also a more secluded option that involves a bed if you've got $1000+ to spare. Who needs to pay rent anyway? 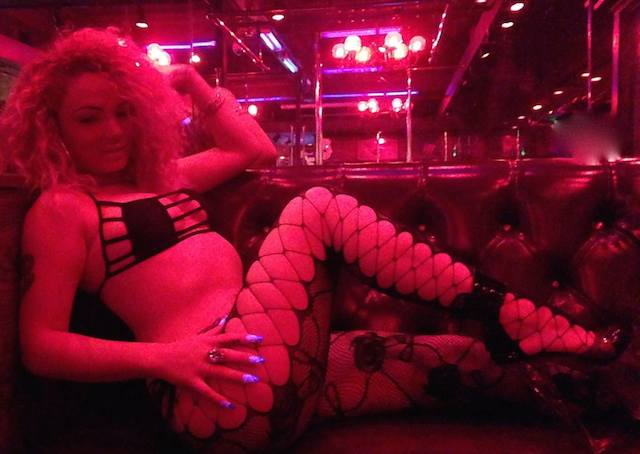 Long before places like Bestia and Church & State began drawing foodie crowds nearby to the Arts District, Sam's was the place to eat, drink and, oh right, see topless dancers in the area. What the place may lack in style and grace, it makes up for with plenty of charm and fun. With multiple poles and often numerous dancers on the center stage, things can get pretty crowded and chaotic, but nobody seems to really mind. The pole dancing is usually far from the best in town, but there's still plenty of enthusiasm, twerking and often costumes involved. And if you need a break from the action, you can usually catch a game or a fight on TV or shoot a round of pool. And Sam's has an impressively huge menu with everything from burgers to burritos, salads to steaks, though we'd recommend the buffalo wings. Their beer selection is fairly extensive and they offer a wide liquor selection, but we definitely recommend the $3 drink special that rotates daily. The cover charge recently went up to $20, but you can avoid it before 7 p.m. during the week. Plus, $10 for a lap dance is a pretty good deal and table dances at your booth go for $20. And if you're looking to extend the party after 2 a.m. when Sam's closes up, you can head just south of the 10 freeway to the sister club, Sam's After Dark, which stays open until 6 a.m. with a slightly more upscale vibe and all-nude dancers (though no booze).

While Canoga Park is not really the sexiest of locations, XPosed really covers the bases, so to speak, when it comes to strip club offerings. The fully-nude gentleman's club features a wide variety of female dancers taking turns on the stage, while the others mill about looking for those interested in a lap dance ($20 for a topless one and $40 for the full monty). The club is well-kept and manages to avoid a seedy vibe for the most part. And while they don't serve alcohol here, you can easily stroll next door to The Wet Spot—their cover-free bikini bar featuring many of the same dancers—and enjoy a few beers or cocktails. Just make sure you get your hand-stamped once you pay the $20 cover at XPosed, so you can go back-and-forth between the two. As an added bonus, there's no cover on Thursday nights for couples, and your date can receive free lap dances all night. The offer (and club in general) is LGBTQ-friendly, though they've been known to ask some couples to kiss to prove that they're not just trying to game the system. And should things really heat up for you and your date, you can stop in next door to Private Moments and pick up everything from sex toys and lingerie, to adult DVDs and bongs. Have fun! 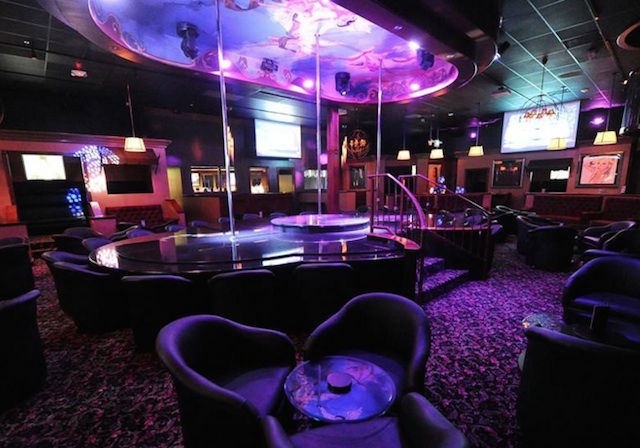 If you're a sports fan who also enjoys watching topless dancers, we have a hunch this spot is for you. With two locations—downtown and the recently opened Van Nuys—Dames 'N Games offers a sprawling space (22,000 and 10,000 square feet respectively) with plenty of fairly comfy seats, and tons of flatscreen TVs. There's a main stage with three poles, all of which are usually occupied on a busy night. What's refreshing is that the dancers aren't usually as pushy about lap dances as they can be in some places, and instead will usually invest time flirting before going in for the ask. Of course, the lap dances take place on couches where you're sometimes sitting uncomfortably close to other patrons on busy nights, but hey, after a few drinks you may not notice. Dames 'N Games also offers a really extensive menu of pretty decent food, including burgers, wings and nachos. And on Tuesday nights you can score a steak dinner for $2, along with well drinks and domestic beers for the same price. It may not be the best steak in town, but hey, $2! 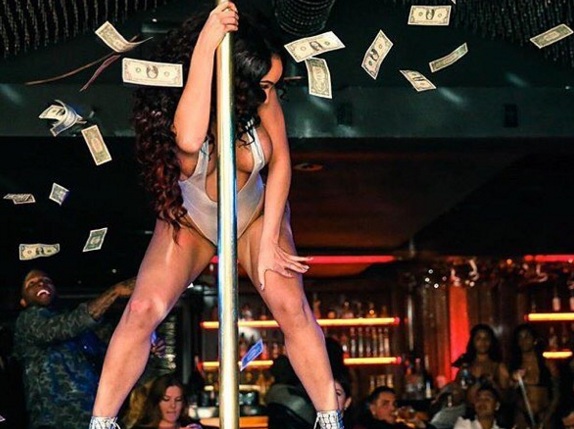 This Hollywood bikini bar got pretty sketchy over the years, but after David Arquette bought the place in 2014 and the place got a bit of polish around the poles, Crazy Girls is much more enjoyable. With one large main stage and a couple of small, circular stages with poles, there's plenty of places to catch a show, and the carved woodwork and leather booths add a touch of class. Though, be prepared to spend, as the cover is typically $20, and private lap dances go for $30. To be fair, you'll be in Hollywood. You also never know when a celebrity might pop in for a show and sometimes even a performance, which can usually add to the fun. And you can save some cash if you go during their daily happy hour from 6 p.m. to 9 p.m. when drinks are half off, and admission is free for ladies on Tuesday nights. 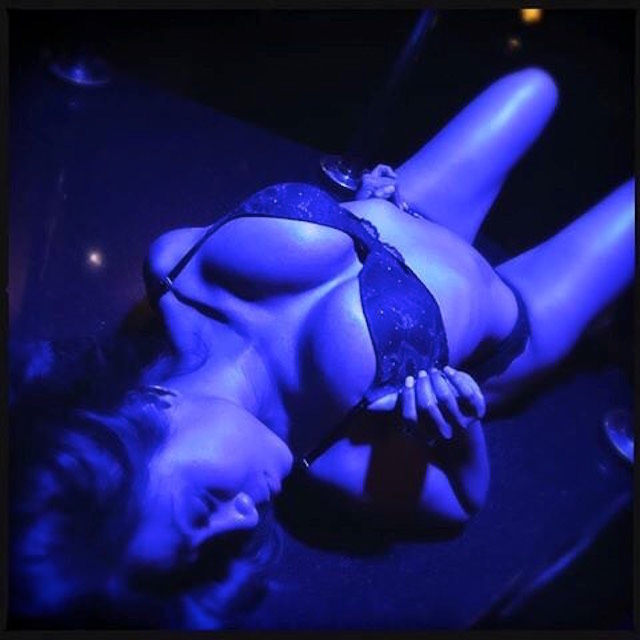 The Spearmint Rhino has outposts in several cities, including Vegas, of course. Los Angeles' Rhino is downtown, and opens Monday through Friday at noon. As such, it offers a lunch buffet, which seems like a real George Constanza thing to do. However, the Spearmint is fully nude, meaning no alcohol is served. There's no cover until 6 p.m. as long as you purchase a drink. After 6 p.m., it's $16 Sunday through Wednesday, $21 on Thursday, and $26 on Friday and Saturday. However, Thursday through Saturday there are deals on cover between 6 p.m. and 7:30 p.m. On Sundays, you can score three nude dances for $100; and cab rides from anywhere in the downtown area are free to the club by calling one of the numbers listed on their website. There are several other Spearmint Rhinos around SoCal, and you can check the club's Facebook page to see when certain adult performers might be making the rounds as feature dancers.—Juliet Bennett Rylah

Jumbo's Clown Room is a great place to go for some scintillating entertainment, a drink and a conversation. While some claim to read Playboy for the articles, we claim we like to go to Jumbo's for more reasons than just the beautiful, often tattooed, talented woman who dance here. Find this black-and-red joint in a Thai Town strip mall, agree not to take any photos or act a fool and you'll get in without paying a cover. The drinks are relatively cheap compared to other bikini bars, and the dancers will choose their own songs from a jukebox—typically rock, alternative, metal and the occasional jazz hit. It's not odd to hear Tom Waits, Judas Priest, NIN and cuts from musicals all in one night. If you're wondering about the clown thing, the bar was once owned by an actual circus clown. The dancers usually aren't in clown garb themselves, but there is a lot of clown ephemera around the bar. The crowd here isn't all salivating dudes either; you'll find plenty of women at the rail, making it rain. You can totally come here for a birthday, on a Tuesday or for a Tinder date without feeling any of the sleaze factor you might be accustomed to at other bikini bars or strip clubs.—Juliet Bennett Rylah 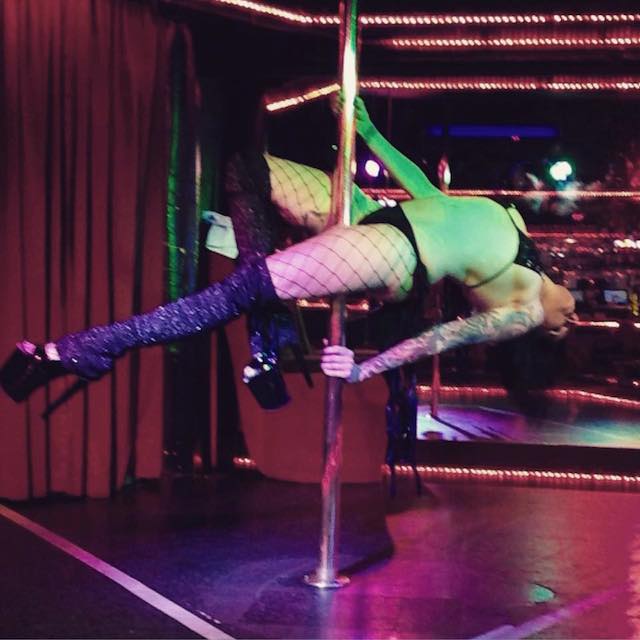 With a rock 'n roll, dive bar sensibility, Star Garden is North Hollywood's answer to Jumbo's Clown Room, only here the dancers go topless. Run by a husband and wife duo, the place feels more like a neighborhood bar and offers a laid-back vibe not often found in most topless spots. While the on-stage performances can vary from impressive feats to lackluster shimmies, the dancers usually take a refreshingly cool and casual approach to soliciting $20 lap dances without the usual pressure. There's also a lot less silicone and more tattoos to be found here than many other places. And you'd be hard-pressed to find a better beer selection at any clubs around town, as Star Garden offers nearly 60 varieties, including 28 on tap, with decently priced craft options and pitchers available for all of them. And you may even get challenged to a game of pool by one of the dancers. 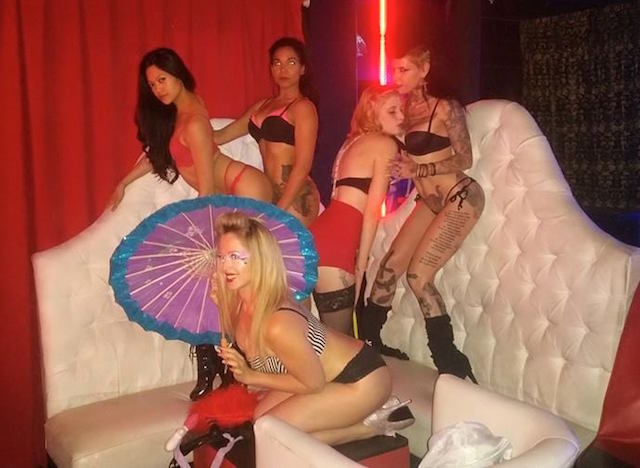 Cheetahs is a bad decision bikini bar where you can expect, like Jumbo's, tattooed dancers with great hair and an edge. However, it still has a very strip club feel, from the white booths to the long runway the dancers utilize. It also has $20 lap dances, and is conveniently close to the Red Line, which is important considering this isn't a fully nude club, but does have a full bar. They'll do the occasional theme night, featuring only '80s music or rock 'n roll—often with no cover—so keep up with their events on Facebook. It's open daily from 8 p.m. to 2 a.m.—Juliet Bennett Rylah 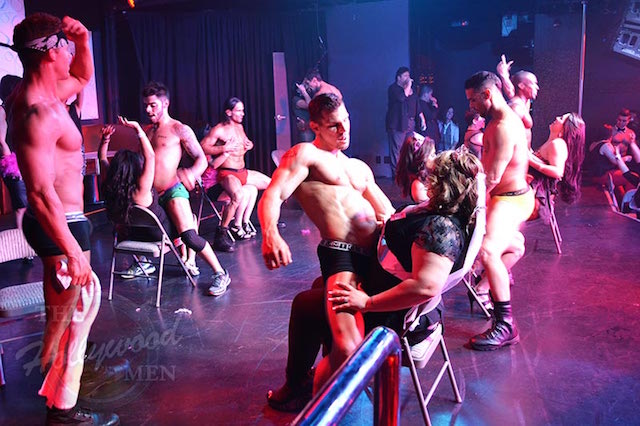 "My Pony" is probably playing (Photo via Hollywood Men)

This is for the Magic Mike fans. While you can certainly see gorgeous men in very little dancing it up by simply walking down Santa Monica Boulevard in WeHo on a Saturday night, there's also a male revue known as Hollywood Men that might strike your fancy. Catch these strapping fellows nearly every weekend at OHM Nightclub (or one of their occasional alternate venues), and expect to see a lot of washboard abs, torn tank tops, bouncing pecs and some very intimate lap dances. These shows are highly choreographed and last about two hours. Tickets are $25, or $40 if you feel the need to be super close to the gyrating.—JBR 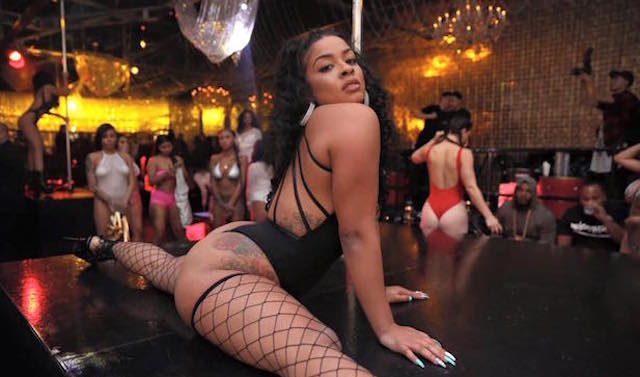 This young West Hollywood club is headed to a TV near you, as it was announced late last year that there's a reality show in the works about the dancers and the famous musicians and personalities who frequent the joint. It's open every Monday from 10 p.m. until 3 a.m., and it's highly advised you show up early if you want to gain entry and catch the parade of beautiful dancers. Most of the performers are women of color, and they have a very robust Instagram account, too.