Video: Facebook Is Expanding Into This Massive Playa Vista Compound 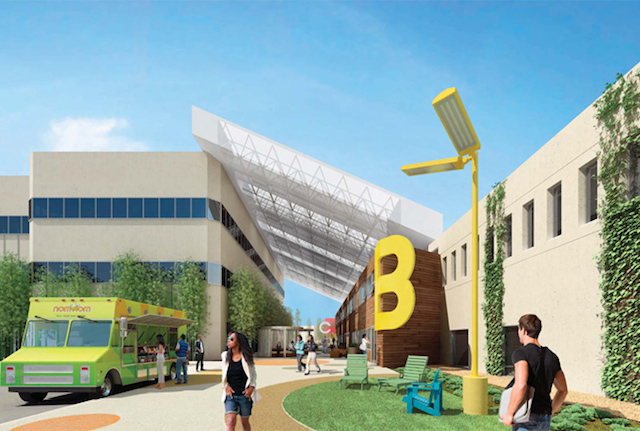 Renderings for the new Facebook home in L.A. (Photo by Fotoworks, via Playa Jefferson)

Facebook is planning to move into a sprawling new office space in Los Angeles sometime later this year.

The omnipresent social media giant, based in Menlo Park, has just signed a lease for 35,000 square feet of space at a creative office campus in Playa Vista, according to The Real Deal. The company's new L.A. home, known as Playa Jefferson and located at 12777 West Jefferson Boulevard, is still under construction, but the Zuckerberg squad is expected to move in sometime in the spring or by summer. They'll be leaving behind their much smaller digs at The Campus, a nearby facility that is home to several tech companies.

According to the Playa Jefferson website, the entire campus—designed by architecture firm Gensler—will feature four large buildings, 200,000 square feet of overall office space, a 50′ glass atrium, and green-friendly landscaping. There will also be plenty of indoor and outdoor common space, bike racks, and, of course, room for food trucks.

The Real Deal estimates the lease for Facebook's new setup will be somewhere below $1.5 million a year. The rent is lightly less than the current asking price, as they signed the deal before the new year and now space is at more of a premium on the campus. We suspect they'll be able to make ends meet.

You can see more renderings of the new campus on the Playa Jefferson site and in this video with a sweet soundtrack: