The Best Nachos In Los Angeles

Whether we're sharing a plate with friends, getting ready to watch a game or soaking up a night of drinking, a towering plate of nachos is always a winner. From cheese-drenched, old school versions with jalapeños and guacamole to creative new twists like kimchi, L.A. has plenty of excellent options for one of our favorite feasts. Here are our favorite nachos around town, and as always, feel free to share yours in the comments. 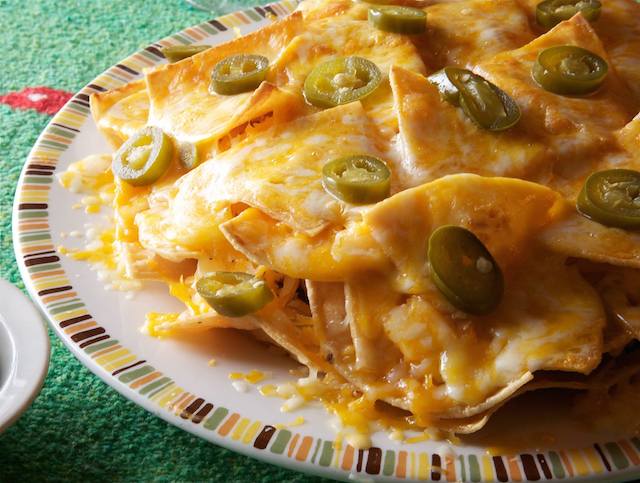 Considered by many as the granddaddy of nachos, the historic El Cholo, which first opened in 1923, claims to have introduced Los Angeles to nachos back in 1959. The story goes that longtime waitress Carmen Rocha, who passed away in 2009, brought an old recipe for the now-ubiquitous dish from her hometown of San Antonio, Texas. "Carmen's Original Nachos (1959)" features tortilla chips doused with plenty of melted, shredded cheese, and topped with jalapeños and the optional—but encouraged—house salsa and sour cream. You can also opt for the "Sonora Style Nachos (1983)" with the added bonus of beans and guacamole.

This old-school, no frills taco stalwart serves up a mean plate styrofoam box of super cheesy nachos. For the Super Nachos, crispy tortilla chips are drenched in molten cheese, which can be topped with a variety of meats—though we definitely recommend carne asada. We also suggest topping it off with the pickled carrots and jalapeños for a spicy kick, and for a refreshing bite ask for the cilantro and onions. If you're taking the order to go, definitely ask for the cheese on the side to avoid a soggy mess. If you're looking to mix things up, order the Papas Nachos where french fries take the place of the chips. 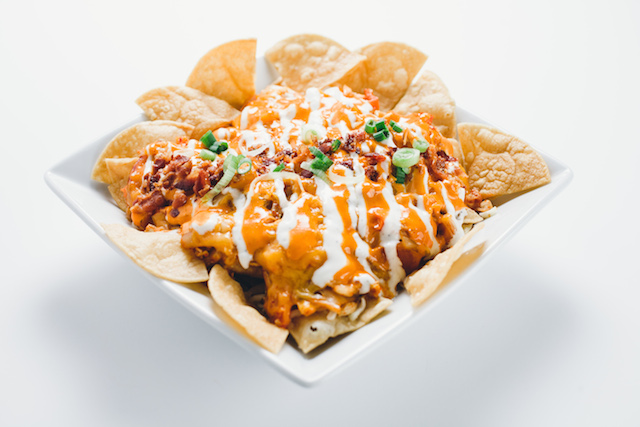 If you weren't already won over by Komodo's Asian-inspired mash-ups, like their ramen burrito or the recent, limited-time return of their phoritto, you're definitely going to want to check out their Kimichi Nachos. These bad boys are stacked with fried corn tortilla nachos, topped with melted mozzarella and cheddar cheese, and then covered with hot kimchi, bacon, chicken, green onions, sour cream, jalapeños and, of course, sriracha aioli for good measure. If you're a kimchi fan, get in here.

This family-run, vibrantly-decorated Highland Park taco spot has made a name for itself with their barbacoa de borrego, which features super tender and beautifully spiced lamb, as well as their addictive carne asada fries. You can go with the small or large version (go large!) of their nachos, which are topped with a healthy dose of melted nacho cheese, sour cream, beans, tomato, and guacamole, and your choice of a wide variety of meats if you wish. While carnitas, carne asada and chorizo are all solid choices, we definitely recommend the lamb. With chef Jorge Garduño, a Cordon Bleu grad, at the helm, you're in good hands. 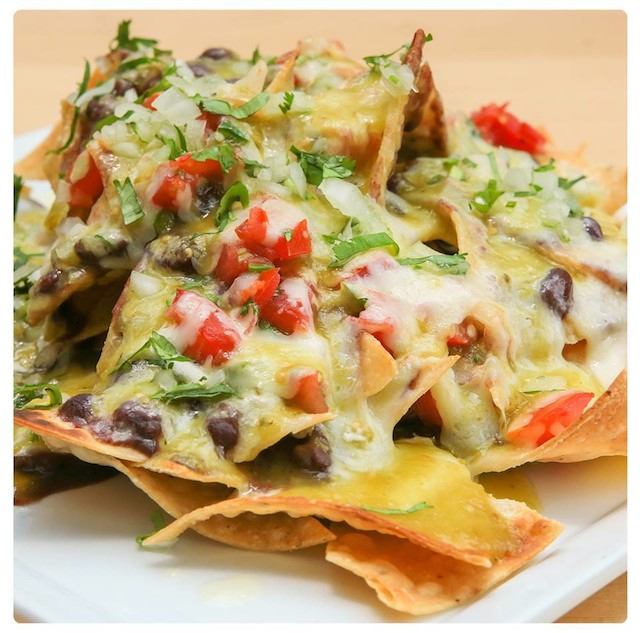 We've been big fans of Loteria Grill ever since their start at the Original Farmers Market. And now that they've expanded to multiple locations around town, we're happy to report they haven't lost their flavor, charm or their reliable nacho recipe. Grab a seat with your nacho-loving friends and order up a plate of their house-made, crispy tortilla chips, topped with black beans, pico de gallo, tomatillo salsa, jack cheese, onions and cilantro. And for a heartier feast, add shredded beef or chicken. We also recommend taking advantage of their house salsas, particularly the fiery and flavorful chipotle.

With mixed-dietary-needs company late at night? Hard to go wrong with Swingers' vegan nachos: blue corn chips topped with all the usual fixings (black beans, house-made guac, pico de gallo and green onions) but capped off with soy cheese and soyrizo. They're so satisfying that even a hardcore carnivore won't mind or even notice the difference. You can still order steak & eggs and their wonderful peanut butter & banana shake, no one's stopping you. —Carman Tse 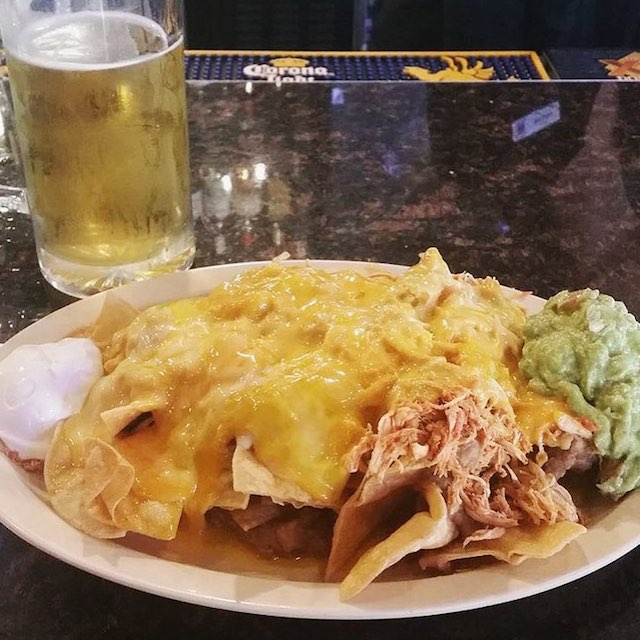 While most crowds gather for the famous Hollenbeck burrito or the hulking, five-pound "Manuel's Special," the nachos at this classic Boyle Heights (and City of Industry) institution are not to be missed. The house chips are doused with your choice of melted cheddar or jack cheese (or both!) and beans, and served with huge scoops of guacamole and sour cream. Take things up a few notches by adding the pork chile verde, carne asada or chicken. Manny, the legendary owner who passed away in 2013, would be proud. 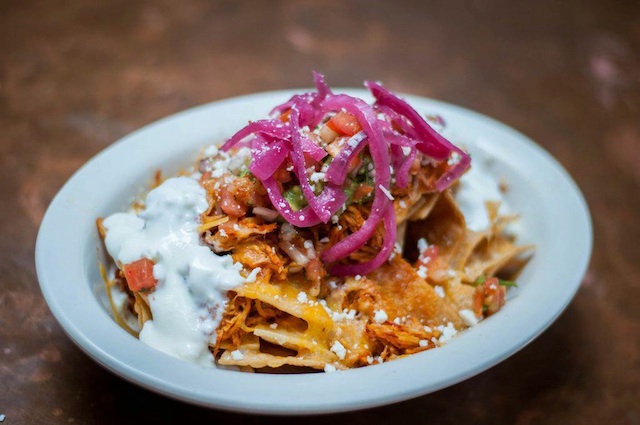 Tinga brings a welcome, artisanal-twist to the standard nacho equation and their Cochinita Pibil nachos are some of our favorite. Topped with orange and achiote-marinated pork that is sweet, smoky and spicy all at once, these nachos are covered with habanero salsa, Monterrey jack, guacamole, pico de gallo, pickled red onions and queso fresco. The Chicken Tinga version is a respectable option as well, and if you're looking for the vegetarian version, check out the Black Bean and Goat Cheese.

Since 1946, Gus's has been winning hearts with their delicious, pecan wood-smoked BBQ and comfort classics, and they bring a killer smoked meat game to the nacho party. Their pulled pork nachos are no mere appetizer, despite being listed on the menu as such. They top crispy, house-made tortilla chips with pulled pork, BBQ baked beans, a molten four-cheese sauce, smoked mozzarella, jack cheese, and then heavily garnish it with guac, tomatoes, red onions, pickled jalapeño, and plenty of house BBQ sauce. The whole thing is fired up in a cast-iron skillet and is always a crowd pleaser. If you're looking to mix things up, ask to swap out the pulled pork for their super tender brisket. 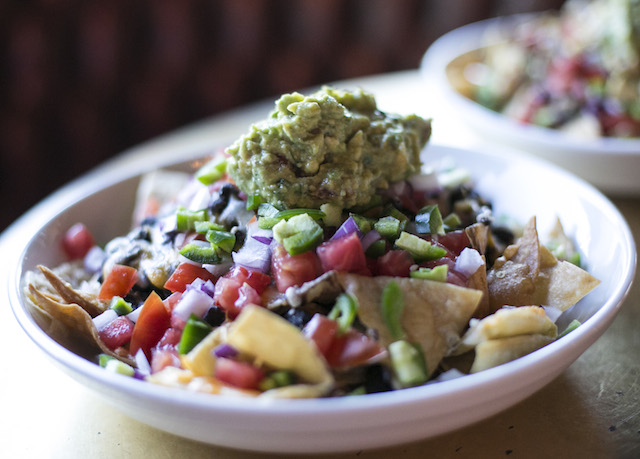 This Echo Park diner is perfect for a late-night fix after a show at the Echo, so it shouldn't come as a surprise that they've refined their nacho game. Their veggie version features freshly chopped tomatoes, onion, jalapeño and cilantro, as well black beans, cheddar, sour cream, and an excellent house-made guacamole. For a couple bucks more you can make them un-veggie by adding chicken. And don't forget to order a slice (or two) of their amazing house-made pie.

Located in a Burbank strip mall, this Mexican eatery offers hefty plates of nachos with all the toppings. The popular choice is the carne asada nachos which, in addition to the steak, comes abundantly topped with cheese, guac, sour cream and pico de gallo. Might seem simple enough, but you're going to have to bring a few friends because these plates are huge. —Juliet Bennett Rylah 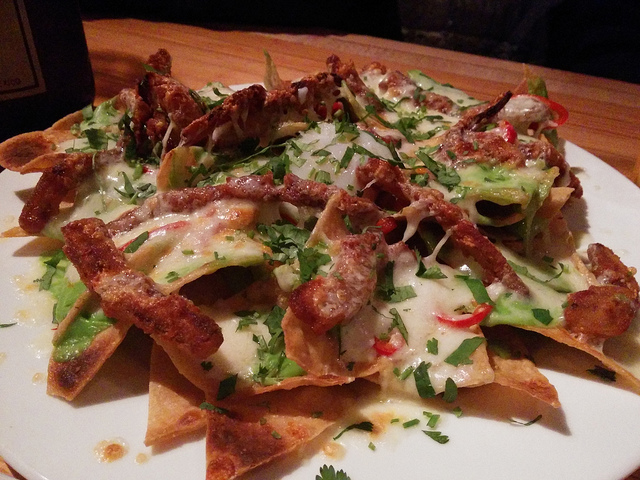 Petty Cash offers two bold twists on the typical nacho platter, both for meat-eaters and veggie-lovers alike. You've likely heard about their deservedly headline-grabbing Pig Ear Nachos, topped with crema poblana, Fresno chilies, a runny egg and, yes, crispy pig ears. But if that's not to your liking, both of their locations also feature their refreshing and satisfying Roasted Cauliflower Nachos with crema poblana, jack cheese, rainbow cauliflower, kale, and pickled fresno chilies. You also can't go wrong with one of their signature margaritas or one of their craft cocktails to help wash down your nachos.

Nestled into a strip mall in Pico Rivera, this tiny outpost has earned a decidedly reverent following for their signature Chile Verde Nachos. Loaded up with incredibly tender chile verde pork, tons of shredded jack cheese, beans, sour cream and a heaping scoop of guac, these nachos are a delicious force to be reckoned with. You're also definitely going to want to hit them up with a healthy dose of their bright red house salsa.