Aggressive Driver Defends His Close Call With Cyclists In Glendale 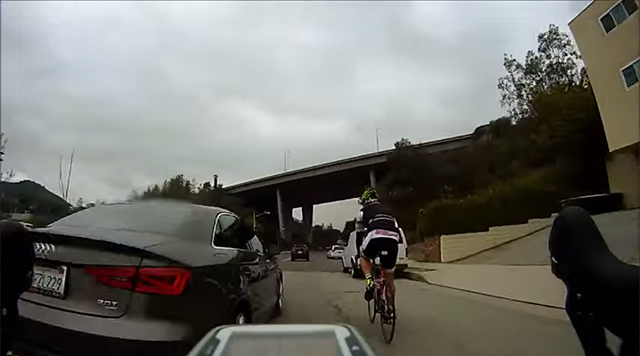 Yesterday we posted a video, originally from CiclaValley, that shows a black Audi driving perilously close to a pair of cyclists on Chevy Chase Drive in Glendale. The video inspired rage across the internet, on both sides.

But the good journalists at NBC 4 decided to find the driver—using the visible plates in the video—and let him tell his side of the story for all the world to know. The motorist—who declined to be identified, but is named Dennis Reed based on the police report visible NBC's video—seems to be just as out-of-touch as his driving indicates.

Reed asserts that one of the cyclists hit his car as he was passing them. Reed said he then attempted to slow down to a safe speed. Reed told NBC 4, “My attention was just all on this guy who is assaulting me. I was just trying to get away from him."

Based on the video, neither cyclist was remotely close to hitting the car, aside from when the car almost hit them. Reed's words fall upon dubious ears.

While his vehicular maneuvering can hardly be interpreted as safely slowing or moving away from the cyclists, we do not see what happens before the video starts. It is always possible (speaking as a cyclist myself) the cyclist rapped his car before the video begins, likely for a previous close pass on the road. We don't know, but there is always a chance more video could be released offering an ironclad narrative of what occurred.

Regardless, hurling a 2-ton vehicle at a person on a 20-pound bicycle is a wanton disregard for the lives of the cyclists, not to mention other people driving on the road who could be affected by said reckless driving. Road rage can very easily turn deadly.

Both the cyclists and the driver have filed reports with Glendale Police.

Please, drive safely. The roads are already dangerous enough with everyone texting and Tindering.